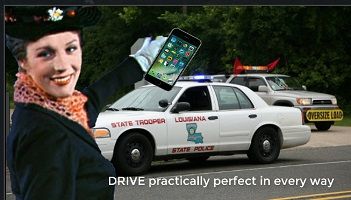 Our Louisiana Legislature loves to pass laws that restrict the behavior of the residents of our state. This increases the power of the “Nanny State” government and also brings in needed revenue for bureaucracies.

The latest effort is a bill to ban the use of a handheld cell phone in a vehicle. The bill will lead to a large fine on the first offense and an even larger one on the next offense.

House Bill 619 is the brainchild of State Representative Mike Huval (R-Breaux Bridge). He wants Louisiana to join only fifteen other states across the country that have approved the ban. Huval cites statistics that show Louisiana has a high rate of traffic fatalities and is “49th in the U.S. for the most distracted drivers.” He believes that banning handheld cell phones will improve these statistics. Some advocates hope the ban will also lead to lower automobile insurance rates.

If legislators really want to create safer driving, why stop at banning cell phones? They should go even further and eliminate all potential distractions for drivers. Of course, eating in a vehicle is a distraction. Thus, the Louisiana Legislature should ban all drive thru restaurants? Certainly, loud music and singing behind the wheel is a distraction, as is stimulating conversation on talk radio, so let’s ban car radios. Babies crying and heated discussions with other passengers distract, so let’s mandate that all cars should have only one occupant.

Unfortunately, even a driver focused on the road can be distracted. There is never going to be complete attention on the roadways as drivers are human beings. We engage in daydreaming and thinking about our day’s activities, etc. If the legislature wants to ban all distractions, then all human driving should be prohibited, and legislators should require driverless vehicles. However, that step might not be enough for safety advocates as we have seen accidents in driverless Uber and Tesla vehicles in recent weeks. So, with accidents on the roadways, maybe the legislature will mandate that all people remain in their homes, but there are accidents at home. It goes on and on as more freedoms are extinguished, but with no satisfactory resolution.

In a free society, true safety cannot be achieved. The answer to our problems is to fight the insidious desire for more government intervention and advocate more freedom and individual responsibility.

Louisiana already has laws banning texting behind the wheel and using a cell phone in a school zone. In addition, there are laws banning reckless and distracted driving. There should be no additional restrictions placed on drivers.

As President Ronald Reagan said, “The most terrifying words in the English language are: I'm from the government and I'm here to help.” He also noted that “As government expands, liberty contracts.”

It is time for the Louisiana Legislature to realize that enacting more laws and restricting more behaviors is not the way to improve the quality of life in our state. Eventually, they need to realize that contracting state government, growing the private sector and protecting the freedom and liberty of Louisiana residents is the answer to our many problems.

This bill, while well intended, is the wrong approach to dealing with problems involving accidents and insurance rates. A good first step is to enforce the current laws. Let’s not create additional work for police officers who already are burdened with maintaining public safety. Their work should be focused on arresting violent criminals not giving hard working Louisiana motorists more tickets.