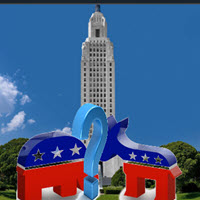 In last week’s episode of the TV series Designated Survivor, Kiefer Sutherland plays the role of the president who is a registered Independent.  When told by the leaders of both parties that he has to choose one political party or the other, Sutherland tells the gathering: “I will stay an Independent. I will take my case to the American people and tell them that that partisanship is ruining this country, and that their representatives are more interested in keeping their power than serving the people.”

The Louisiana legislature finds itself in gridlock quite similar to the “do nothing” Congress in Washington.  Governor John Bel Edwards has just called his sixth special legislative session after only two and a half years in office.  Yet legislators have little direction or specifics as to what the governor wants to accomplish. Yes, balancing the budget is the primary goal, but what’s the administration roadmap to get new revenue or make additional cuts?

A large number of Republican legislators seem content on opposing new taxes without offering any specifics on what cuts need to be made.  And with a gubernatorial election on the horizon next year, keeping the governor in a financial quagmire means a better opportunity for a strong Republican challenger.

So how about future chances of the newly formed Independent Party?  Independent voters are on the rise in Louisiana, with 26% of voters choosing such a designation. The Bayou State regularly votes Republican but only 30% of the electorate is registered as such. Independent voters could well outnumber Republicans in the next few years.

Democrats hold a 44% registration, but white Democrats are leaving the party in droves. Only 18% of voters are white Democrats, down from 35% just 17 years ago. The Democrat Party accelerated its demise when party officials decided it was no longer “politically correct” to honor Thomas Jefferson and Andrew Jackson, two American icons who were the two most important figures in the creation and protection of Louisiana. The Jefferson-Jackson annual democratic fundraiser is now called the True Blue Gala, as part of the party’s warped effort to rewrite history.

Louisiana’s open election primary system, where all candidates run in a no party contest, would make it easier for an Independent candidate to be elected. And the perfect opportunity for a candidate to exploit the Independent label is the special election for Secretary of State that will take place this fall.  An Independent candidate could make a strong case that the State’s chief elections officer should not be part of a partisan party effort, and should not be aligned with either Republicans or Democrats.

Louisiana has a long history of voting irregularities. Remembers the words of former Gov. Earl Long who famously stated;  “Oh Lord, let me be buried in Louisiana. So I can stay active in politics.”  And we are witnessing an ongoing investigation of Russian meddling in the nation’s elections, all of which are regulated on a state-by-state basis. A well-financed Independent candidate for Secretary of State, who ran a campaign that called for non-partisan oversight to insure fair elections, would be quite appealing to Louisiana voters.

I would also suggest that a new Independent party, appealing to center-right voters, would also be attractive to more moderate Republicans and Democrats, who are sick and tired of the “tribal politics” that seems to have become a blood sport here in Louisiana.  There is a lot of dysfunction in Louisiana politics today. Perhaps there is an opening for Independent candidates if they will seize the opportunity.