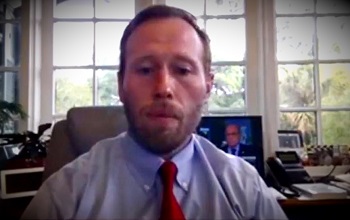 This just-completed Louisiana regular session was known, in part, for its division—left vs. right, Democrats vs. Republicans, House of Representatives vs. Senators. However, every once in a while, the legislators came to agreements.

Legislation pushed by the Louisiana Mid Continent Oil and Gas Association involving protestors deliberately attempting to damage oil pipes was one of those few occasions, it seems where all the normally fragmented lawmakers coalesced around a single cause—engage in protective and corrective legislation for the purpose of ending what many would consider criminal mischief, albeit the freedom of speech of protesting.

Today, via Facebook Live, I spoke with the general counsel for the influential oil and gas association, Tyler Gray, to discuss the purpose of the legislation and other related matters.

Below is the transcript to the first segment of the interview. Also below is the video of this segment.

GRAY: So here in Louisiana they're building a Bayou Bridge pipeline along the southern portion of the state. They have had several protesters that have shown up on site. Now they have have made some arrests there. Now they have not had the same level of threat that's been created by the protesters that were in the north of Morton County where they were building the Dakota Access Pipeline.

Now really that comes to hindsight is 20 20 that construction for it is completed at this point and they're still building the Bayou Bridge.

But looking back at that construction there were several challenges that were brought forward that really created a lot of problems for the local and state government including about ninety five percent of people that were arrested in Warren County North Dakota were not North Dakotans, were people from out of state and it included about half of those that had a history of criminal violence or alcohol or substance abuse, along with that. So with previous criminal records, that was just not something that we were interested in having come to Louisiana and create a significant challenge and burden on our local and state government which as you probably know we've had a significant conversation and problems with our, surrounding the problems with our state budget, last few years. It was just another added expense that we were working to prevent being burdened on the state.

SABLUDOWSKY: So these people got arrested for trespass? Am I correct?

GRAY: You know there are isolated incidents and each is a case by case basis.  : So currently in Louisiana law there is a protection against trespass on critical infrastructure.

Now some of them could be arrested for trespass depending on what they were doing. What we were really pushing was the damage piece. You know you do have instances across the United States, in Alaska where people will fire firearms at pipelines that are exposed above ground damaging them. We know there have been stories of people shooting Ar-15's at pipelines and if you're moving a pressurized gas, this is incredibly dangerous. So we will be focused on the damage piece of it. There is an unauthorized entry that was already in part of law that actually Major Thibeault represented, legislation Major Thibault passed in 2015. which is why we look to him again at this point for carring the damage portion. And coincidentally as part of the Governor Edwards criminal justice reform in the 2017 legislative session, there was a bill that was filed by many legislators that we believe and had a conversation with it was accidentally removed the the criminal damage to pipelines piece. So after having conversations with several folks in the space we were able to get to get some alignment on putting them back into the law. And we did have an opportunity to talk with several criminal justice committee members. One with Senator Claitor the chairman of Judiciary C which oversees this legislation as it passes through the process, we were able to determine that--it was, it was not, the intent was not to allow these structures to be damaged. It was really an overall effort to remove duplicative laws that were on the books. Now at this point, we made a few changes to the laws so it's not duplicative. It really gives the state and local authorities what they need in order to prosecute dangerous individuals that are that are on these locations and we don't have to wait for the federal government and really gives more power to local and state and protecting our structures here on shore, in Louisiana.

More in this category: « Maness: Budget naysayers mainly on left not satisfied with Louisiana budget Budgetary chaos reigns at Louisiana capitol with special session »
back to top