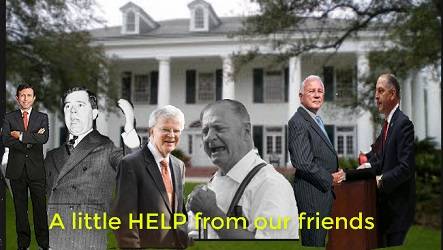 For those living on Mars the past couple of years, in January 2016, Edwards took over from an ex-presidential candidate moonlighting as the Louisiana Governor for eight years while residing in the mansion.  That was the season of “The Jindal”.  Edwards inherited a extraordinarily deep budget gap that seemed to drop faster than the Bayou Corne sink hole.  Jindal’s modus operandi was to balance budgets by ransacking other departments’ pockets, sucking out the rainy day funds through the magic of smoke and mirrors, and to kick the can so far down the road that it could not be found until the following session. In fairness, the oil prices dropped by two-thirds as Bobby Jindal took off after his two-term stint.  Six special sessions and two regular sessions since, the Louisiana budget is still listing, taking in less revenues while trying to pay for the same level of its desired services from the year prior.

Over two years ago, the legislature with Governor Edwards at the helm, passed a two-year temporary sales tax of one penny which will end on July 1. Thus, the folks at the Capitol are debating whether to cut to the bone or extend some of the temporary tax or perhaps, some give and take.

Yesterday, during our Facebook and Twitter Live Show, the House did pass a bill and sent it on to the Senate. That compromise would raise about $350 million leaving roughly 300 million or so in the short.

So, what’s a governor to do? Or, perhaps better said, in terms of our discussion yesterday--who should the governor be, to effectively get things done?

In other words, should Governor John Bel Edwards get his agenda passed if he were to morph into a Buddy Roemer, an Edwin Edwards, a Huey Long or even an Earl Long?  Thinking big, how about a Ronald Reagan?

Yep, Brown and Aswell have come to the conclusion that for Edwards to be successful as Governor, he needs to crack the whip, perhaps get a personality transplant and take on the persona of, say, one of our leaders of government past.

Below is the transcription of part of the interview. Click on the video to watch all of the broadcast or fast forward it by moving the video scroll to pick up where the transcript left off at the 11 minute, 19 second mark.

JIM BROWN: I don't know if you've been watching this budget fight at all or not but and you but we'll know here later on today whether we go into another special session, another $60,000 a day over so many days or whether something's going to get done, you got a perspective on it Tom?

TOM ASWELL: I agree with you, the Governor won't take advantage of that and and beat up on the Republicans but that doesn't seem to be his style.  Frankly I wish he would.  He needs to flex his muscles a bit. He is the governor, he is a chief executive officer of this state and he needs to act like one and he's not asserting himself as I think he should. The other Edwards Edwin Edwards certainly would have done so.  He would have called the legislative leaders in and read him the riot act. They would have had to come to Jesus meeting long before now and this mess would have been straightened up and I think that's what Governor John Bel Edwards needs to do, barring that, he needs to borrow a page from the Reagan playbook and go to the people and present his case to the people and let them contact their legislators.

That's what Reagan was a master at that, and think, I don't know I just don't see the passion with John Bell that I had hoped that would see when he got elected.

JIM BROWN: And I could pick up on that Steve that I can and echo exactly what Tom Aswell was talking about. There's a couple of perspectives. First of all I've had some legislators tell me well he doesn't have the tools that Edwin Edwards or past governor's had, first of all,the state's broke, he doesn't have anything to give out and therefore it's hard to squeeze these legislators especially with them just a year to go until we're into their election and so they don't mind digging in their heels.  Number one, particularly when you know when there's a feud, he's got a real uphill fight getting reelected.  But Tom I would agree with you this--if the governor would call us and advise us here in this show, he's--I'm sure he's watching this podcast right now, he's making mistake if he doesn't, but I would tell the governor this --that picking up on what you said Tom I don't see the vision. I think he's a decent guy that's trying hard and the day-in day-out basis but and there's and he's dealing with a lot of real crises but every now and then you just gotta let, you know, it's "brushfires".  Every day day, like, he wakes up to brushfires.  Sometimes you've got to let some of those brush fires burn because seven out of ten times they take care of themselves. He's got to step back and give a state of vision a reason to support his program and lean on legislators. If I were him

JIM BROWN: were him i would  get out of the Capitol, get out of the governor's mansion, crisscross this state speaking to groups right and left-- saying, just as Ronald Reagan would have done and saying look "I need your help, this state is in a real crises and we need you to back me up and lay out a plan--here's what we need to do--one two three four five.

It drove me crazy when Buddy Roemer, when I ran against him for governor used to say let me be specific, one, two, for all my guys, but it's good, it works. And he's not doing that  Steve, just as Tom said, he's not expressing that vision or getting people riled up to support him therefore--two choices--get the people riled up or arm twist legislatures and as we've talked about before he doesn't really have much Moxie to twist those arms.  Number one, it's not his style, but number two, you can't threaten to take away projects because there's no money for the projects to begin with

STEPHEN SABLUDOWSKY: And, I think that's really a lot of the problem is.  I think that's what the problem is, if I might just cut you off  Tom, for a second and that is-- in my opinion I don't think that he has the the resources to be able to apply pressure on the legislature in terms of going out to to the public, I don't think he has the support in--of the people--to be able to really get out there, to emotionally make impact. Looking at Buddy Roemer in terms of the little thing that he had, in terms of fiscal reform, and you saw how that ended up. Turned out that David Duke beat him to it and I just don't think and David, I'm sorry, Buddy Roemer had certainly had a much better speaking ability style and persuasiveness than does John bel Edwards so

STEPHEN SABLUDOWSKY: So I don't know,if he's able to get out there and do this. The last person who did, I think was was Mike foster Louisiana Inc, if you remember, I think it was called and you know he was lucky you know to get some support and but ,you know, wasn't because of him per so, in terms of his getting out there to speak.  I think it was Steve Perry but even that had a lot of problems .  So I don't know I mean we need lost, when he lost the the House Speaker, that that was it and so it's really hard, when you everybody you know in the house and the Senators is pretty much against you, particularly the house.  Again I just think that you you have limits in terms of what you can do.  So I mean that's my two cents ahead

TOM ASWELL: But, but, when Huey Long ran for governor when he was on the Public Service Commission, he spoke at church one time, and as he was speaking the train came through and didn't stop, and he said you know, that train didn't stop here, he said, if I'm your governor, it will stop.  That's that's what John Bell needs to go, every parish, find out what that parish needs, what their wants are and address each specific need in each specific parish and say Tennesaw Parish, you need pure drinking water, Lincoln Parish you need buildings for Grambling and Louisiana Tech and on down the line and each separate Parish and point out the needs to them--that if you don't get my program passed you're never going to see these projects. And I think that's the tactic that he needs to employ

STEPHEN SABLUDOWSKY: So well, so first to piggyback on what you're saying-- if if you have any any money to deploy then, it's kind of hard to make a promise and say "okay this is--this is what you're gonna get

STEPHEN SABLUDOWSKY: But, right now, he's looking at three-tenths of a penny,

Exactly, because he hasn't put the "want to" in the minds of the people--he's got to put the want to in their minds  make them realize, I need this and if I want to talk to my legislature and get these taxes passed

JIM BROWN: Well I tend to agree to agree with Butch on that or Tom on that , I said Butch that was the name we called the Tom Aswell, years and years ago,

TOM ASWELL: Just call me in time to eat, that's all

JIM BROWN: But Steve, I mean it's kind of a catch-22. You say, well we don't have the money, but he really can't go out and promise anything, well he can take several approaches, first of all you take the Earl Long approach, when when asked "look Governor when you ran, that-- you said you're gonna build this road down and and what do I tell them?".

In fact it was Judge Reggie who told me this story and he was the one who went to see the governor.  And the governor thought forward and he said, "Tell them I lied, tell them i lied!!".