And even another Louisiana fiscal session "food fight" over budget scraps 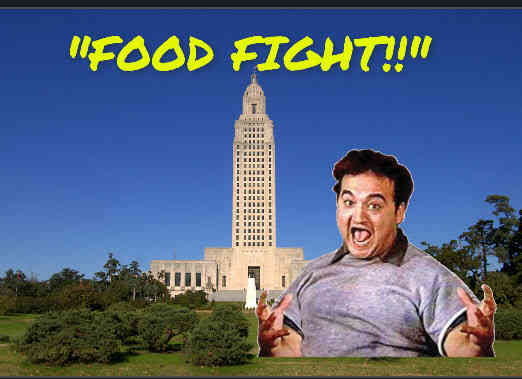 It is difficult to fathom how Louisiana legislature and our Governor John Bel Edwards have gotten us in the situation where fiscal matters dealing with the budget are more chaotic now than they were after the traumas and horrors of Hurricane Katrina. But they are.

Last night, the House Republicans ran out the clock, preventing any further opportunities to emerge for a late, last-minute deal. They were adamant that they were not going to budge on the revenues increase. Nor were the Governor and others willing to toe the line on spending and on raising taxes.

Now, it’s back to the drawing board. The Governor is expected to call our third special session that would take place roughly seven days after the official call. Will they be able to split the baby? It appears that the two sides are seventeen cents in sales taxes per one hundred dollars of purchases separate the two positions from compromise.

Last night, a minority in the House of Representatives let the second special session of the year collapse in the final minutes.  Once again, the House ended another special session in chaos with an absolute failure of leadership.

Members of that minority in the House acknowledged their efforts to leave critical state services with devastating cuts.

“Yes, I am trying to run out the clock,” Rep. Alan Seabaugh said at the microphone as members attempted to revive a measure that would have funded higher education, TOPS, Go Grants, Sheriffs, District Attorneys, and other critical priorities.  “Yes, I am,” he responded to a statement that he was “trying to kill the special session.”

If you're having trouble viewing the video, click here.

Key provisions of the overall bipartisan plan received the support of a clear majority in the House, 64 members, and was supported by a vote of 32-6 in the Senate.  By contrast, a proposal by the House Republican Caucus chair was only supported by 38 members of the House of Representatives.

Passing the bipartisan plan would have resulted in a reduction of the tax burden on the people of Louisiana of $500 million and would have cut more than $200 million in government spending.  The proposal was $205 million less than the standstill budget supported by the legislature in 2017.

In addition, that plan would have funded:

In a snapshot, the next special session, which is going to cost approximately $60,000 per day, will be required because a minority in the House refused to reduce the sales tax from 5% to 4.5%. The difference between the bipartisan proposal of 4.5% and the Lance Harris proposal of 4.3% is a mere 17 cents for every $100 spent.

In should be noted, however, while many state agencies will endure severe cuts, the legislature passed a budget that fully funded their own operations.

How are the people reacting from another failure? Here are some of the email statements we have received and some recent posts from twitter:

State Representative Malinda White reacted to the breakdown of another special legislative session by saying she won’t let it cost the the taxypayers of her district any more than necessary to reach a compromise the fully funds the budget.

"I've to tried forego my paycheck for the per diem but the rules just won't allow that. So, I'm pledging to donate my pay -- about $1,500 over a 10-day session -- to a worthy cause in District 75.  I'll take the coming days to focus on our District and away from the craziness in Baton Rouge then decide where a donation will have the most impact," White said.

“By failing again to pass a solution to fund the budget, the legislature in Baton Rouge has abandoned the people of our state. It makes me sick. Our failure should not cost taxpayers more. That’s why I won’t take my pay for the next legislative session,” said White. “The people of my district don’t get the option to just spend more when they fail in their responsibilities. I live in the real world.”

Last night’s special session failure is an embarrassment, and once again makes clear that Louisiana is structurally stuck and won’t move forward without fundamental changes.  The time has come for us to convene a Constitutional Convention to restructure how Louisiana delivers government to its people.

The world is changing.  Louisiana needs to discuss how we evolve to keep up, and invest to create a future Louisiana where our all our kids and grandkids can stay and thrive.  A Constitutional Convention gives us that opportunity. We urge our elected officials to embrace this proposal, and to begin the conversation as soon as possible.

Today, House Democratic Caucus Chairman Robert Johnson (D-Marksville) issued the following statement on the end of Louisiana's second Extraordinary Session. In the final moments of the sessionthis evening, House Republicans admitted on the record they were trying to shut down state government contingent upon a third special legislative sessionbefore June 30, 2018:

"Today our Republican colleagues abandoned the people of Louisiana, and chose to shut down state government. Without a solution before June 30, their irresponsibility will take state police off our roads, release thousands of violent criminals without regard for public safety, prohibit LDH from inspecting abortion clinics and shutter the Governor’s Office of Homeland Security just as hurricanes season begins.

They could have chosen a moral budget plan that provided $500 million in tax cuts to working families, cut government spending by $200 million while fully funding our priorities like TOPS, hospitals, and care for seniors and our most vulnerable. Sadly, they refused to prioritize our people."

It's important to point this out because it's the false narrative that "we're all in this together" that obscures the actual problem. The radicals aren't "in this together" with the rest of us. They're whipping us at ever turn. #lalege

Gov. John Bel Edwards: House Republicans’ failure to solve fiscal cliff was “a total collapse of leadership.”
“It is a sad day for the state of Louisiana,” the governor said. “You saw a minority in the House put politics over people.” #lalege #lagov https://t.co/fa4orFJ9pn

Nope. Leger’s bill had reached its apex. Wasn’t gonna get any more votes...unless you think Alan Seabaugh & others of his mind would flip. The fact is the Dems n #lalege killed Harris’ bill at $405m because they wanted $550m. from Leger. They swung for the fence...and whiffed.