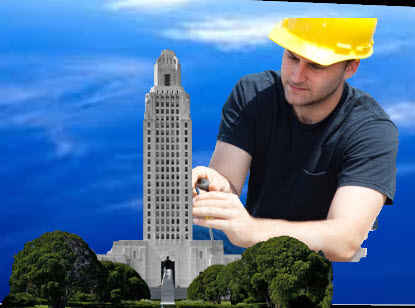 If you had the dictatorial powers to fix the Louisiana budget, how would you do it?  Raise taxes such as sales taxes? Increase the income taxes? Property taxes?

On Monday, hours prior to the Louisiana legislative special session, number three, started, i asked John Kay Jr., how would he fix the state's problem with the budget?  Kay is the State Director for the Louisiana Chapter of the Americans for Prosperity organization, a group funded by the conservative Koch Brothers.  It favors smaller government.

Yesterday, we published part one of that interview. Below is part two and his response. This segment ends at the 12 minute, 11 second mark on the video.

SABLUDOWSKY: Okay so if anybody has a question go ahead and ask the question or make a comment love to hear from you.  So if you had to do it,  you asked me if i'm asking you-- what you would do if you had the say dictatorial power to be able to decide?

KAY: Sure i would look towards what the legislature promised that they would give us in 2016 when they passed this which is structural reform structural reform to the budget. I think we need to have, i think we're going to get some sunshine into the budget with the louisiana checkbook at some point in time. I think we really need to know how the money's being spent versus how it's being appropriated and when we need access to the the budget to be able to open it up and to make cuts across the board if necessary, on a tax level. We have a ton of credits and exemptions i don't think that anyone disagrees with that i think we're we're one of the the top states as far as what we give out in terms credits and exemptions.

I think some of that is in the code because we have an uncompetitive business climate in Louisiana so we have to make up for that somehow and we do that with credits. I think that we need to establish a system that works for business, works for individuals and encourages people to come here and grow long term rather than continually changing the code over a few years. That's how I would fix it. I think, that I think that if we were to really address the problems that we have about trying to fix, fix the underlying issues that exist in Louisiana, that Louisianans would--we wouldn't have to get there all these special sessions anymore, but we would have a tax code that was set up that would really work for us and would encourage people to come here without us having to open up the checkbook and write a check for them to come open their doors here in Louisiana.

SABLUDOWSKY: So what is the status of the checkbook?

KAY: It was passed in the last regular special session I'm not entirely sure that it is fully funded kind of yeah I think it was passing us putting a good ideas pile. I think that the governor's office, the administration has said that they're rolling out something a little bit better than will LATRAC, the beginning of July.  I haven't had, I haven't been able to see that yet. I'm very hopeful that it provides us a clearer look at the state's finances, how money is being spent across state government. I hope that there are very few questions left for people who want to get a feel for how the money gets spent, once it's released. I don't know it looks like, we'll see,but I hope that it is state-of-the-art and it puts us on a plane with that of Ohio, where we can really open up a checkbook--we can search expenditures and we can see exactly where our state state dollars are being spent. I think that it's probably the the simplest request that the taxpayer could make of the government is--"we're going to give you money, shows where you're spending it", and hopefully that's what this program will do.

KAY: I think there's plenty of blame to go around. I think that for if governor Edwards doesn't want to accept any blame for where we're at in the state, I think that that is that's a little bit disingenuous on his part.  I'm not entirely sure that he wouldn't accept some of it. I think he voted for six of the eight Jindal budgets if my memory serves me.  And I think that history has proven out that those budgets were not founded upon solid rock, if you will.

I think that some of that has been cleaned up as we've moved along, but at the same time while we may not be using one-time money like we were in the past, we are still requiring more and more money to fund the state government. And I think that's one area where a lot of blame does go towards this governor. There was in the regular session, the both chambers of the legislature helped pass House Bill 321, by Representative Rick Edmonds to the governor's desk and the governor vetoed that bill. And what it would have done is, it would have opened up state government to where the joint Legislative Budget Committee on the budget would have had, would have had access to funded vacancies and money  they appropriate for vacancies--vacant positions within state government and whether or not those positions were filled, and where that money goes.

The government, the governor vetoed that simple request from the legislature. I continue to ask the legislators to, if they want to cut government to put their name on it, because say this is where I want to cut state government. But his vetoing their ability to have the information to make decisions-- like putting a cut on funded vacancies.  So I think that it's a shell game. I think that state government is not something that people can have much trust in anymore. I think that you probably see that if you talk to much of anyone in Louisiana,  either side of the aisle.