Barras, not Governor Edwards is right on revenue estimating conference and projections 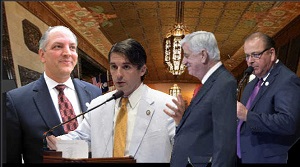 Nothing has changed, so nothing should change, despite the histrionics of the Gov. John Bel Edwards Administration.

Last week, Louisiana’s Revenue Estimating Conference met again with an attempt to update forecasting numbers on revenue. The figures produced get fed into the budget process, with Democrat Edwards’ executive plan for state spending in fiscal year 2020 due in about ten days.

Currently, recognized revenues reflect estimates of nearly seven months ago. Two months ago, with the group mandated to meet no later than the end of the year, it gathered to consider an increase because of higher-than-expected oil prices. It had predicted throughout this fiscal year a price of $59.42 per barrel, but the two sources used by the political appointees – the Commissioner of Administration Jay Dardenne, Republican House Speaker Taylor Barras, GOP Senate President John Alario, and university economist James Richardson – representing the Administration and Legislature thought that should increase to the $61-64 range.

As the REC needs unanimity to change a forecast, Republican state Rep. Cameron Henry, attending on behalf of Barras, essentially vetoed that by refusing to go along. He cited a downward swoon in prices and uncertainty going forward. At the time, the //www.cnbc.com/quotes/[email protected]" spot price had dropped sharply in the preceding month to below not just the requested price, but the forecast one. It fell further over the next month to around $50 when Barras at another meeting didn’t approve of a change.

It recovered since, closing yesterday just below $54. Using that and end-of-month prices since the beginning of the fiscal, the weighted average is about $64. But the problem is, the U.S. Energy Information Administration doesn’t see much upside from here over the next calendar year. It predicts a final 2019 price (West Texas Intermediate crude is what the state uses as a benchmark) of $54.19. If that’s indicative of the first six months of the year, the state will have trouble hitting its original estimate.

Thus, Barras prudently refused again in the last meeting to hike the forecast. Given the metric that every buck change in price equates to $12 million in revenue, at least $60 million is in question, or about half of the claimed forecast revenue increase (other kinds of tax collections have seen small increases to date above previous prediction). Maybe if the REC had voted on an increase half that size, perhaps Barras could go along with that.
But such a compromise as of yet doesn’t interest Edwards. He wants it all and wants it now because not only would it permit him to spend immediately $43 million in contingency items, but then it also would raise next year’s baseline to let him grab a good chunk of money desired to fund permanent, across-the-board pay raises for teachers and support staff. Both serve as linchpins of a reelection strategy focused on distributing as many goodies as possible.
Yet partisan political necessity cannot take precedence over prudential stewardship of state dollars. Craven remarks made by Dardenne, who hypocritically likened Barras’ resistance to gamesmanship that would spur a budget of “fiction,” don’t change that fact. Speaking of fiction, consider it was Dardenne’s office which claimed at this time last year the state needed $1 billion more in new revenue, then it became around $650 million, and finally he acceded to the Legislature reinstituting tax increases worth about $500 million – followed by news that the budget year that just ended produced a $300 million surplus. Use car salesmen have more credibility in their claims and numbers than Dardenne has shown.

Barras makes perfect sense when he counsels waiting perhaps a month or two before pulling the trigger on any change. That would occur well in advance of the Legislature’s regular session to construct a budget, and will present more data to smooth out the volatility witnessed in oil prices as well as in the overall economy (as demonstrated by whipsawing indicators since the start of last December). It’s the prudent thing to do.

However, it’s not the electorally convenient thing for Edwards, and that’s why Dardenne complains, putting the needs of Edwards ahead of those of Louisianans.
Read 1215 times Last modified on Wednesday, 23 January 2019 17:18
Tweet
Tweet
Published in Louisiana legislature
Tagged under

More in this category: « Louisiana insurance rates highest, Too big to fail, too big to regulate Put Louisiana government under the arch of performance »
back to top