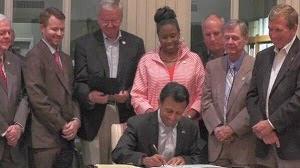 Affirming the panel would have allowed enforcement of the law starting yesterday. But opponents asked for a rehearing, which, although swiftly denied, automatically triggers a seven-day injunction. Undoubtedly, opponents will use that time to petition for the Supreme Court justice assigned to the circuit, Samuel Alito, to issue an injunction that invites the entire court to hear the case at a future date, further delaying enforcement of the law.

The law’s supporters argue its necessity to ensure safety of the older patient. Even if fewer than one percent of women who permit terminating the life of their unborn children experience complications, it’s bad enough that one death already comes from the activity. Unquestionably the state has an interest in keeping the body count as low as possible by reducing any needless risk.

Detractors base their claim on the law’s alleged onerous demands placed upon providers. In particular, they fault the admission requirement radius as burdening clinics to the point that most cannot operate, which essentially abrogates the presumed right currently interpreted under the Constitution that it conveys a right to abortion under certain circumstances. As judicial proof, they cite a 2016 Texas case (within the circuit) against a law featuring a 40-mile admission requirement that supposedly forced 32 of 40 facilities into closure.

That case ultimately ended with that law declared unconstitutional, but, as the panel noted, the present case deviates substantially from it. Louisiana hospitals have much less stringent admissions demands for a doctor to acquire privileges, to the point that only one abortionist has had such a request refused. This, panelists noted, demonstrates that the law would not cause clinics to close.

Further, driving distances to facilities that remain open – one each in the three largest metropolitan areas – don’t constitute any undue burden to those wishing to kill their unborn, unlike in Texas where clinic closures created much larger trips. And, given the objective circumstances present, under the law refusal of the one doctor would not significantly reduce access.

Circuit activist judges – all but one an appointee of Democrat presidents, while all those who rejected the review joined the court on nomination from a Republican president – did their best to disparage these facts in their dissent, trying to make these equate erroneously with those in the 2016 case. It further disregarded the panel’s cogent analysis that concluded the law could stop no more than one of the half-dozen doctors performing abortions in Louisiana from continuing that and made up out of whole cloth a more apocalyptic scenario.

Essentially, the two sides disagreed on interpreting the facts and in the legal process involved. No doubt Alito will intervene to stay the decision because of its potential impact that the Supreme Court will wish to vet. But, given the current lineup there and the judicial philosophies they follow, the likeliest outcome would uphold the Fifth Circuit on this.

That would make Louisiana an excellent trailblazer, not just in producing a practical law that could set the standard nationwide, but also in minimizing the human toll that abortion exacts.

More in this category: « Put Louisiana government under the arch of performance Upcoming Louisiana House race, a harbinger of red Republican MAGA-domination »
back to top