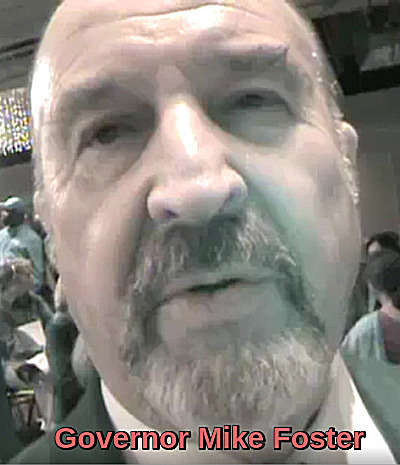 "There is no place like Louisiana on this earth, and I think that when my days are over, I’ll find heaven to be no different from Louisiana – maybe a little bit cooler in the summer. "

Governor Foster passed away last week, leaving a legacy of numerous positive accomplishments during his time in public life.  I worked closely with the governor on a number of important issues during the time I served as Insurance Commissioner.

Fly fishing, and insurance problems involving Governor Foster converged one spring day when I was vacationing at our family home in the North Carolina Mountains.  Some years back, I went there over Mardi Gras. One morning, I was at Faye’s General Store drinking coffee around 7:30 a.m. when the phone rang. One of the locals picked it up and told me that Governor Mike Foster was calling.  Now, remember, it’s 6:30 a.m. in Louisiana, and it’s Mardi Gras. I thought it was wife Gladys playing a joke on me.

But, no, it was the governor on the line. “Jim, Mike Foster. Got a minute?”

“Morning, Governor. You sure know how to run a fellow down, don’t you?”

“I called Gladys, she told me you’d gotten out early. I don’t want to disturb your fishing, but I just want to talk a little insurance with you.”

My coffee drinking companions at Faye’s had a hard time believing that the Louisiana governor would call me up in the North Carolina Mountains at the crack of dawn on a state holiday to discuss insurance business.

While still in the state senate, Governor Foster had created the Louisiana Worker’s Compensation Corporation to help small businesses that were having trouble finding insurance coverage for their employees. Even as governor, he was concerned about a healthy insurance climate.

The next morning around 6:30 a.m. my phone rang.  “Jim, Mike Foster.  Sorry to bother you so early, but I have one question.  Did you tell my appointed commissioners of my concern that no rate increase should be given to State Farm?”  I told him, yes, I had conveyed his message to each of the six commissioners. “Thanks, that’s all I needed.”

Three hours later, Governor Foster called a press conference and fired all six commissioners.  An insurance company needs to have a fair rate in order to stay in business.  But gouging the property owner without justification is not fair to the insured, and bad for economic growth in the state.

The Legislature, the governor and the insurance department could learn a good lesson from the Foster years.  Be fair, but don’t let rate increases take place at a company’s whim.  Policyholders  were better served under  Mike Foster.

Jim Brown’s syndicated column appears each week in numerous newspapers throughout the nation and on websites worldwide.  You can read all his past columns and see continuing updates at http://www.jimbrownusa.com.

More in this category: « Louisiana students on wrong side of digital divide
back to top