What must a candidate running for public office do to get noticed? Does it make a difference whether the candidate is new to the political scene versus someone who has tire marks of experience?  Has the Internet changed this process and if so, how? What role does polling have for those who are new to the campaign trail, compared to someone who has a track history of electioneering? Are polls necessary in all races?

With elections for Louisiana Secretary of State and other local offices about to place in November and with statewide races on the plate for next November, these issues of putting together a election campaign are certainly ripe.

Thus, to kickoff a continuing series focused upon winning elections, I felt that the words of two men in particular, with literally decades of battle scars in running, operating and being involved in major statewide campaigns, would be appropriate and of great value to anyone in the election industry.

Experience matters. And very few people in this state have the candidate experience and the polling and political analytical chops than the two men I interviewed this Monday evening.

At that time, Jim Brown, Bernie Pinsonat and I, for roughly one hour, discussed getting elected, past and present.

Brown has run statewide races for 28 years, winning the Secretary of State positon and the Insurance Commissioner spot. During this time, he also unsuccessfully ran for Louisiana Governor, losing to Buddy Roemer.  He has raised millions of campaign dollars in the process and came out of obscurity, as a young, southern country lawyer with zero political name recognition to winning a Louisiana Senate seat and then operating two of the most important state agencies, for years.

Pinsonat, was a high official for US Senator Bennett Johnston and then took that experience to the campaign world, traveled the state getting business and become known and ultimately evolving into the leading and most highly respected pollster and political analysts in the state.

The interview was as part of the Bayoubuzz’s ElectionWin.com webinar series. We covered an array of topics, including those posed in the first paragraph of this writing, to their own personal experiences in running campaigns to advice they would give someone wanting to run for office for the first time.

The initial part of the interview, after introductions, dealt with how to get started as a candidate and in the age of Internet and social media, whether going to events would be as necessary and important as it would have been in the past.

Here is a sample of the comments on this particular issue:

First of all, you got to remember that a much higher proportion of young people are on social media then older people are and those who are older gravitate more towards just a few sites primarily Facebook.

I can run a survey but if nobody knows who you are, I'm really gonna poll about what people care about, what do you want to talk about, what issues are important but being a candidate really helps if you think about it in in you start making plans to run.  You just jump up unless you have money then it's very very difficult, to be honest with you. it's just so expensive, but you do what I did and Jim did to get known--join city clubs, take part in organizations around the parish or in the city or in the area. You give your time to charity, make friends get known and you get to know the right people so when you go ask them for money or you ask them for help then they knew who you are and they know something about you.  But just to jump up and say I'm going to run for office really doesn't work out that well generally.

My poll tells me about the Internet,  I don't have to, I don't guess about it, I know.  One of the things we do when we do a survey, is first of all you call upon likely voters--likely voters--these are people, I don't know how you voted, watching you I don't know how you voted, but i know every time you've ever voting in your life. So we classify based on your initiative to vote, how likely, you vote there five elections, you may be early or late, whatever, but you vote. But if you don't vote, I'm really not that interested in you and social media is great but--what's really important is--look,when I run a survey I'm looking at how likely people will vote, if somebody says they're undecided and if it's pretty late in the elections, it they pretty lately election and they're still undecided Jim will tell you, as a candidate, I'm not really that interest in those people , probably not going to vote.

Some of the other issues discussed during the interview:

Below is a short segment of the interview.

Interested in watching the entire 56-minute interview?  If so, you can acquire it by clicking here. or image below 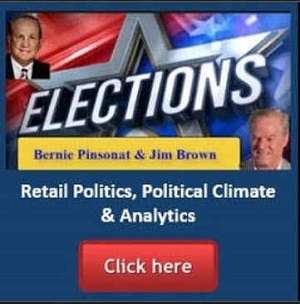 More in this category: Allee Bautsch talks art to raising campaign money »
back to top