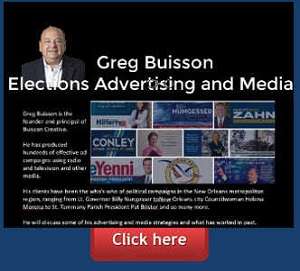 How important is the media consultant in the elections campaign? Does it make a difference if the election is for a major statewide office or a parochial position of power? Who calls the shots? How dependent is the candidate upon the advertising firm, the public relations persons? What qualities should a candidate or campaign manager consider when hiring the person who might create the ads, the TV spots, the Internet buys? What if the campaign goes into crises mode, who do you call, what do you do?

These are just some of the issues that might come up when Greg Buisson of Buisson Creatives enters the Bayoubuzz’s ElectionsWin.com webinar pit, Saturday, September 22nd at 9am.

Buisson is recognized in the New Orleans region as a major political player, a man behind the scenes who has literally helped elect the top public servants and office holders in Jefferson Parish and elsewhere.

Just completed webinar, Bernie Pinsonat and Jim Brown...learn from the masters. You can acquire it by clicking here

Greg Buisson has won national awards for his work honored by the American Association of Political Consultants annual 'Pollie Awards.

The Bayoubuzz ElectionsWin Webinar is scheduled for one hour. This is a paid event that will take place within a private Facebook Group, so Facebook credentials are required.