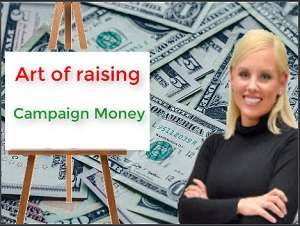 Without doubt, raising money for a political campaign is essential. Raising a lot of money is even better.

Is there any one-size-fits-all approach to generating revenues for a political or even legislative campaign? Do candidates like to raise the money themselves by calling upon the prospective contributor? Or would that be left to the person charged with that campaign obligation?

Recently, I had an opportunity to discuss these and other issues with Allie Bautsch Grunewald who many believe is the premier fundraiser in Louisiana. She was the fundraiser for Louisiana Governor Bobby Jindal in gubernatorial campaigns and in his national endeavors such as his 2016 presidential run. She currently is the principal of The Bautsch Group.

In my video discussion with her, we talked about the actual process of raising money. Who does it?  Who makes the calls, who gets the money? Also, we discussed the very unique effort by Jindal to tap into a national marketplace for his presidential campaign.

This video segment began with my telling her about the recent webinar I had conducted with Jim Brown who said that during the course of his political career as Secretary of State, Insurance Commissioner, and State Senator, he raised over eight million dollars (in yesterday’s money). He described his process that he would deploy to ensure that the investment of his time and effort paid off.

Below is a short segment of the video with Allee Bautsch Grunewald. Also below is the transcript of this part of the interview.

We previously published part 1 of the Allee Bautsch Grunewald interview which you can locate here. The entire interview lasted just under one hour. If you would like to obtain the entire video, click here

SABLUDOWSKY: (Discussing how Jim Brown would raise money) He would get on the phone and call people and say “hey look I need your money.  This is how much I need and I'll go and I'll send somebody to pick it up today”. Is that is that pretty much what happens or does a candidate not get involved or just depends upon in this situation?

BAUTSCH GRUNEWALD: Yeah it really depends on the personality of the candidate. Some people are very outgoing and actually enjoy raising money and they enjoy asking people. And in politics, you could ask for stuff a lot too as an elected official, so some people just enjoy that process. The vast majority of people we work with would rather spend time, I think, doing other things.  fundraising isn't the thing that they want to wake up in the morning and do and so we kind of help in that regard.

I think that there are a couple different ways candidates ask for money.  you've got a event-based fundraising. You've got direct contacts, in other words, making phone calls or one-on-one meetings and then you've got kind of a blanketed ask, where, in a group setting you can ask folks to support you. And I think that it's just based on the candidate's personality and you kind of have to find what works for them.

And we help to kind of figure out what the best scenario is and get into a level of comfort where we kind of create a system for them to fundraise, so in other words, some people are gonna be better speakers and more comfortable in a group, others are much more comfortable one-on-one and so we try to build our fundraising program for the individual candidate.  So it's not a one-size-fits-all type thing.

SABLUDOWSKY: So when Governor Jindal decided to run for president and he  went through, even before, he actually declared, did he do anything different in terms of trying to raise money for his run or for the groups that he was involved in versus, when he was-- say-- running for governor--either the first time a second time?

BAUTSCH GRUNEWALD: Yes it is a drastically different thing running for a national office than running for statewide office, it certainly requires you, traveling a lot more. So, of course,  his travel did kick up and it's running for governor in Louisiana is an interesting process, you get to meet great people all across the state. And it's similar to that, it's just you got to cover a lot more turf, more quickly, and so I mean it's a very daunting thing. It's exhausting and it it is not easy doing what they do. It's not something that I aspire to ever want for myself-- so  I mean you're waking up at 4 a.m.  You're not going to bed until midnight.  It's it's very taxing. But as far as what he did differently,  it required a lot more of individual cultivation and time on his part because, for a lot of the people he was making contact with nationally, he hadn't met them before.  once you have the relationship it's much easier to call on someone's behalf and say, "can you support them? Will you support them?", but  he needed to make a lot of those initial contacts with folks who he may not have met before, so I would say that that's probably the biggest difference,

SABLUDOWSKY: He had a lot of speaking engagements and so that way he was able to get out there and  meet people--so that would be the way to do it?

BAUTSCH GRUNEWALD: Yea, your name might be up--as far as fundraising goes, in a national campaign like that, typically you have people like myself in each state and so you kind of create a network and so we did that successfully if he was running for reelection as governor, for him, because he was able to raise money from folks in other places who were interested  making sure Louisiana had a good  conservative Republican governor. So he did have relationships elsewhere--it was just expanding upon those and like you said adding in speaking engagements building name ID doing all those things