Comparing past and present political and elections campaigns--Farwell, Williams, Chervenak 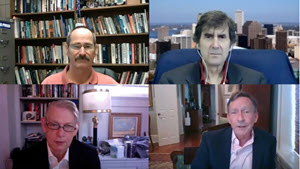 Actually, politics, as everything else today, moves in warp speed, where yesterday seems like forever and what existed the day before has no relationship to tomorrow.

Which is why I asked three of the best know political minds in the region to discuss the evolution and changes in the political landscape.

The question was asked during a video discussion as part of Bayoubuzz’s Political webinar series.

JUDGE WILLIAMS: I think I was in the Institute of Politcs in 1977 with Ed Renwick, he'll also did my polling than and we won. I think the biggest change is that everything is so instant with social media. And in the older days it would take a while for things to seep out into the public consciousness, now with the 24-hour news cycle, with Twitter which I don't know how to do and other things--good news or bad news is out there instantly. You have to be able to react instantly. I've seen that locally but yeah you can look at the national politics right now with the divisions out there. Everyone has an instant comment. So I think it makes it a lot more difficult for people who are running for office or are people who are in office, because everyone is in a position to express their opinion and some of them are not very calmly expressed. I don't know if I want to be running right now.

JAMES FARWELL: Well I think there are three things that are different. First is the as David says the profusion of social media in which everybody is is a journalist. It used to be that the TV stations and the newspapers serve as gateways to access to public opinion now everybody can. That is less important, in a local race than it is in a higher-level race. The second thing is that the cost of campaigning has escalated. Our campaign finance laws are a shamble and as part of that it's something that people don't talk about very often this phenomenon of early voters is a debacle for the integrity of the process. Because you, if you now have to start spending money, let's say four weeks before the election, but you may not have a lot of money in order to do it and so it means that you have to raise or spend two to three times as much money as you have to. And by requiring people to spend more money and raise more money I think that you make too much more people to special interest. Money does not grow on trees.  The third thing though this is not something that affects Orleans Baton Rouge Jefferson Parish local politics, but it does establish excuse me, it doesn't in state-level politics, it doesn't in federal politics, is the extreme polarization along partisan lines that is taking place. Louisiana was one of the last states in the country that you could run on an basis as yourself. You can cross over and work with Democrats work with Republicans and the alliances that formed across party lines. That's just not true today. Republicans are Republicans, Democrats support Democrats and that affects your calculus when you're doing strategy. You put those three things together and you're living in a different world than you were in 2006 and 2008 which don't seem all that long ago

ED CHERVENAK: Yeah I think what we've seen in the recent decades is decline in civic engagement and the loss of the civic voice, that we're seeing much lower rates of turnout in local elections, state elections and probably about the same at the national elections. So it's getting harder and harder to get people to the polls. It's getting harder and just to get engaged people get them involved in campaigns. We're seeing more and more efforts by campaigns just to reach out to chronic voters as opposed to reaching out to the electorate as a whole.  And tied in with the previous comment about polarization is that and this filtering down to the state level and it seems like more people pay attention to national politics than any other level of politics. And that their attitudes about politics at the national level is influencing their vote choice and their attitudes at the local level. So our politics has become much more nationalized and that our attitudes and all that behavior are geared towards whether you support the president or you don't support the president, regardless of what's going on at the local level