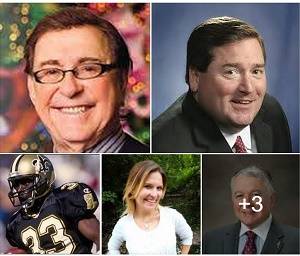 It's time for Politics with a Punch, election season 2015, and you're invited.

Politics with a Punch is held monthly on stage before a live audience. It is our own local version of “Politically Incorrect.” It is a humorous, fast-paced, free-wheeling, no-holds barred discussion of what is happening in our city, state and nation.

Our next show will be special as we celebrate our Election Season Kickoff.

We launched Politics with a Punch in 2002 and have enjoyed 13 years of great times thanks to our awesome panelists and faithful patrons.

During our colorful history in New Orleans, we have featured some of the top political, business, comedic, media and entertainment talent in Louisiana. We have also enjoyed poking fun at the unique and colorful world of Louisiana politics.

The next program will be held on Thursday September 17 at the beautiful Eiffel Society, 2040 St. Charles Avenue. This outstanding venue offers valet parking, fine dining, and a superb staff for our Punch patrons. It has been recently renovated and looks exceptional.

For this special show, we have picked an outstanding panel with some of our favorite all-stars plus some exciting newcomers. Check out our exceptional line-up of celebrities:

On our star studded show, we’ll cover all of the major issues and controversies of the day in a light hearted and humorous manner with our unique Politics with a Punch style.

We’ll discuss…. Mayor Escapes House Arrest. When will the Firemen be paid? Saints Star Cam Jordan Investigated for Nightclub Incident; 4 Confederate Monuments are Targeted for Removal; David Vitter Says Mayor should be more Focused on Crime; Governor’s Race Begins as Vitter Attacked for Prostitution Scandal; One Reporter Claims he was Fired for Asking Tough Questions; Many Candidates Get Free Ride with no Competitors; Desperate Bobby Jindal Criticizes Donald Trump as Selfish; Second GOP Debate; Once Again Governor is in “Kiddie” Panel; Trump Leading in GOP Race; Sanders Leads among Democrats. How? What Happened to Hillary and Jeb? Will Joe Biden Ride to Rescue? Kentucky Clerk Back on Job; Gay Marriage Debate Rages; Ashley Madison List; Josh Duggar & Others Revealed; Deflate Gate is Over and Brady Wins; Waste of Time? As Saints Start with Loss; what are Prospects for Season? Did Coach Payton Blow Call at Game’s End? Along with more Great Topics, as always, it will be a Prime Time for Punch!

With so much serious discussion in the news, it is beneficial once a month to be able to playfully discuss some of the hilarious, insane and unpredictable events which occur in this state.

The event is hosted by local talk show host and commentator Jeff Crouere. It is co-produced by Steve Sabludowsky, publisher of Bayoubuzz.com, who co-founded the event with Crouere.

For ticket reservations or for more information, contact Jeff Crouere at #504-669-6076 or [email protected]

More in this category: « Court rules against Jindal on Common Core as junior varsity Presidential debate nears It's Summer of Trump, Outsiders; In Louisiana elections, insiders still prevail »
back to top