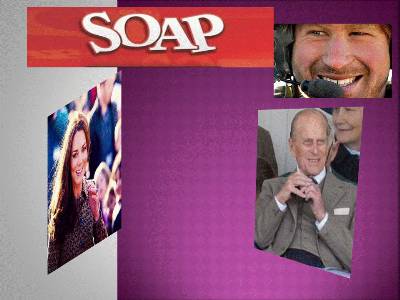 Is Kate Middleton’s recent naked balcony display in the South of France a big deal?

Now that the Duke and Duchess of Cambridge have ended their royal tour, the photos snapped by one or more enterprising photographers are starting a tour of their own–France, Italy, Denmark, Sweden, and Cyberspace, where they will freely circulate forever. Nevertheless, Prince William and Kate have sued in France, and have also filed a criminal complaint against persons yet unknown.

If I were royal, I wouldn’t sue or try to throw photographers into the Tower. No.

I’d just blame it on the Ambien.

Yes, the Ambien, also known as zolpidem. Ambien is a popular sleep-inducing drug lately used as a convincing alibi by the rich and famous for, well, odd behavior. I’ve never sampled it myself, preferring to thrash restlessly away, watch really bad cable, eat ice cream, or pull out my Kindle when I can’t sleep. But Ambien has a big celebrity following.

In the past, the pill of the celeb scene was qualudes or otherwise called "soapers". But, that was then and now is now.

Westchester, New York police suspected that mistakenly taking a dose of Zolpidem instead of thyroid medication may have caused Kerry Kennedy, the late Senator Robert Kennedy’s daughter, to swerve across a highway, smash her Lexus sedan into a massive tractor-trailer, and then drive off with a flat tire. Found on an exit ramp with her engine still running and Kerry believing that her car was still moving, police observed her tawkin lie dish and swaying.

An infamous California chef claims he took Ambien the night he may have "accidentally" killed his wife and then weighted her body down like a poached salmon and slow-boiled her remains away. But it’s kind of hazy.

Ambien was also blamed for famed newscaster Tom Brokaw’s recent slurred speech and droopy-eyed, slack-jawed appearance that made viewers think he was either stroking out or punch-drunk on MSNBC’s Morning Joe election primary commentary show, and caused aides to send for an ambulance. U.S. Navy SEALS reportedly popped Ambien on their way to Pakistan to assassinate Bin Laden, and claims are also made that SEALS regularly take Ambien to switch their sleep cycles around when they are assigned night guard duties. A furious Hollywood homeowner claims that when he accused actress Lindsey Lohan of stealing valuables from his house during a party, she said the Ambien made her do it.

Rachel Uchitel, Tiger Woods’ homewrecking lover, allegedly said Woods used the drug often and they enjoyed "crazy Ambien sex." Experts, called in by the tabloids to evaluate this claim, conjectured whether Woods’ wrecking of his Cadillac Escalade on Thanksgiving night was due to him taking Ambien to, basically, amnesia-ize himself against adultery charges, given Ambien’s memory-erasing qualities. "A classic case of Ambien driving," one declared. Uchitel herself reportedly wonders whether she and Tiger had the best sex ever, but she just can’t remember any of it because of the Ambien.

And all these celebrities, famous and infamous, may be right.

Ambien not only makes you sleep, but it can make you do unusual things while you are asleep.

The National Institute for Health in Bethesda, Maryland, warns that zolpidem may not be for everyone: "You should know that some people who took zolpidem got out of bed and drove their cars, prepared and ate food, had sex, made phone calls, were sleep-walking, or were involved in other activities while not fully awake. After they woke up, these people were usually unable to remember what they had done. Call your doctor right away if you find out that you have been driving or doing anything else unusual while you were sleeping."

Wow! Driving cars, preparing and eating food, having sex–all the while asleep and having no consciousness? All that in one little pill?

Having sex? Who would risk taking that? Think carefully before you answer.

It therefore stands to reason that Ambien could have, conceivably, caused Kate Middleton to strip off her bikini on an open-air terrace in broad daylight while vacationing in a French chateau that sleeps 17, has a staff of servants, yoga instructors and reiki masters, and is actually a working lavender farm where the fertile land is tilled by handsome French plowmen, the fragrant harvest gathered by modest French women, and hand-made lavender soaps and oils and things can be purchased in the chateau’s shop by ever-erstwhile, camera-toting tourists looking for interesting things to see, do, and experience in Provence. It’s all so impressionistic-like that, for all we know, the next Vincent Van Gough could have been painting the beauteous, sexy Middleton reclining, disheveled, on her balcony by viewing her from afar, with the benefit of modern technology. Minus the tourist minivan, of course. But it’s clear that Chateau D’Autet, where the Royals most recently romped, is a busy, bustling place. That is why, if you genuinely don’t want to be photographed naked, you’d best keep your clothes on, or stay indoors, just in case some wandering tourist with a camera phone wanders onto your terrace while looking for the loo.

But let’s get back to the blaming the Ambien.

If Ambien can make you have SEX with someone, why can’t it make you take your clothes off? Firstly, this is usually (but not always) what one does prior to sex anyway. Secondly, Ambien may also explain why Prince Harry, Kate’s single brother-in-law, recently stripped down to his birthday suit, grabbed at least one other naked woman, and then jumped into bed with yet another naked woman who is 40 but (in the right kind of light) looks 20ish. Soldiers use it, right? So, ambien could also explain why Prince Harry then plopped down in Afghanistan, looking dazed and confused, but giving the "thumbs-up" sign and acting as though he was readying to fly a helicopter and shoot-to-kill the Taliban, even though he seemed to have trouble standing.

And then there is the Royals’ patriarch, Prince Philip, who this past week at Scotland’s Highland Games crossed his ankles, spread apart his knees, and let the world officially know that he allows nothing come between him and his kilt. Tabloid websites called Prince Philip’s "weiner" a "one-eyed Loch Ness Monster" while noting that the Queen, sitting next to him, "kept her private parts discreetly covered."

I mean, is it FAIR for France to arrest the photographers and raid the publishers when the Royals just let it all hang out?

Maybe if Kate Middleton had taken an Ambien for her trip home when she stopped off in Brisbane to change planes and the wind lifted up her gauzy minidress, revealing the backside we’ve all come to recently know so well, there would be less explaining to do. And aide could just say, "Oh, dear, that’s the Ambien walking," and we’d all quickly understand. Although the Duchess seemed to try to grab at her billowing back end a couple of times, eventually, an exasperated aide had to come stand behind her and block the show with a sheaf of papers. As one young woman who took Ambien warned: "Before I took Ambien, a friend warned me that I should unplug my phone because it’s really strong and that people do crazy things on it," she said. "The next morning I woke, and I wasn’t wearing any clothes."

That’s an Ambien alibi that the Royals might want to try next time.

More in this category: « Birth of Advocate New Orleans Edition, Publisher David Manship Q and A Stunned New Orleans Saints and Green Bay tee up with replacement referees, Goodell under fire »
back to top