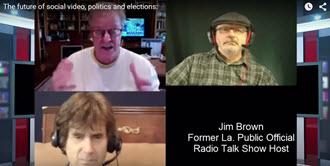 Surely, just about everyone now is familiar with social media, but why not, deploy what Sabludowsky calls, "social video"?  Why shouldn't the political world use it to help themselves win elections, extend their collective reaches to potential voters and backers?

Below is part I of the blab video.  This was  recently recorded live in front of a twitter audience.  Part two includes participants from that audience.

You can read the transcript below, watch the video (which also contains closed caption)

JIM BROWN: I want to say this starting off, picking up what Scott said, I think the candidates have really missed an opportunity--we're in the early stages of doing this kind of thing of these broadcast..here's why they're missing it..number one, they don't understand it, most candidates don't understand just what's involved.  They think it's so complicated and they got to go take courses, it's not that complicated.  But number two, they don't realize the value.  First of all, few candidates that I've  come across really keep a detailed email list, have a Twitter feed,  have a Facebook page--they put one up for show, but they've, you know, knowing what I know now,  when I was in politics before--I know, I would always want your card, every time i'd meet somebody, i'd want their card, and put it on my mailing list, which of course, cost stamps and all of that kind of thing.

Well, today, I'd want your email address and, if I were a typical statewide official in Louisiana over a four-year period,  I'd want to put together 30, 40, 50 thousand  email addresses--then you could let people know about this concept just by email, via Twitter, by Facebook.  Most candidates have not done that yet.  So we're on the cutting edge of what I think will be pretty much the norm for 5 years from now

SABLUDOWSKY:: okay, so just out of curiosity, what, and this is  just an open question,  but what do you think the reluctance might be?  I mean, Jim you've have been involved in politics for quite a while, did you tell me 27 years, was that the magic number?

SABLUDOWSKY: Yea, mine or yours. But, what's the reluctance, I mean, I know that, and Scott, you can certainly assist too.   Politicians want to be perfect.  They don't want to have any, anything that could possibly go wrong with a presentation, with the way you look, with the way you sound and so on.  So, is this the real detriment of this type of technology whether it be, say,  blab or Google Hangouts or  meerkat or periscope--which we'll talk about shortly, is it--are we pushing the envelope too fast for the politicians to be able to hang on and say, yeah I'm going to do it?

JIM BROWN:  Let me answer, let Scott get more into the technology aspects of it, while i step out and get a cup of coffee, here's how we have it--we've translated from retail politics, which i just happen to love. That's my forray, being an older guy, i guess.  But, I love going to parades and fairs and festivals  and throwing candy like Mardi Gras and networking, and calling all the radio shows and and shaking hands--that was the before of what it was all about 15 years ago.  Then, the political consultants all said, hey, it's all TV.. if you got money, even and local races put it on TV and radio that's all you have to do and you have enough money to do it you don't have to go at do the retail politics anymore.  So, that's kind of where it is today.

JIM BROWN: And very few officials running this time have picked up on that, now David Vitter, because of the technological people he has in Washington, the Republican Party has picked up on the telephone calls, where they' all have town meeting, you and I will get these calls and it says, its, David Vitter, punch one, and you can talk to me right now in a town meeting I'm having on such and such a subject.  To some degree, Vitter started along that line, but no candidate in Louisiana, that i've seen, have effectively used the technology we're talking about now, and here's the mistake their making, even if you don't get a lot of viewers who will  watch this kind of thing, the fact that you're sending out emails telling what you're doing and you're talking about it, shows your little ahead of the game, you're on the edge of technology so voters you have never watched you, will say, gosh, i like that guy, he's able to put on these special programs and talk to me over the internet and so a lot of it, it makes it very appealing in my opinion.  The problem is, that just hasn't gotten the across yet--even to the consultants--you see, you have consultants out there telling people--look, you've got to put this kind of program together.  They are putting little advertisements  on Facebook, that kind of thing, but nothing like someone like Scott who can sit down and do and Steve, you guys together could offer a vast range of products for these candidates who are missing out on, I think that's going to change four years from now, it's a whole different world.

Now, Scott, didn't want to dominate, I throw to you as terms  of what the options are right there, while I get a quick cup of coffee.

SCOTT SCOWCROFT: Well sure, and you'll be able to hear us as we're  talking as well, and good points, Jim.  You know, I think one of the reasons, you're question, Stephen is, why aren't politicians using social media, and i think one of the reasons is they are social media illiterate.  They're not using social media in their business, they're not using it in their personal professional lives and it doesn't occur to them to use social media for their political campaigns.    That, coupled with the campaign managers, you might have a point there, that they are cautious, they don't want to lose control and it's also not what they were trained to do.  They know how to do retail, place ads do brochures, and all of that, it's a brand new skill-set and quite frankly, A lot of the people who are directing the campaigns, in my opinion just don't have that skillset. It's exactly the same thing that's happening in the real world, in the other part of the sector, where you have advertising agencies, that know little or nothing about how to  mount a proper social media campaign. So, if there wasn't a, if there was a reason for that, i think it's just an illiteracy out there in terms of the  decision-makers.   What do you think Stephen?

SABLUDOWSKY: Yeah, well I certainly don't disagree with what you are saying  in terms of the literacy.  Yeah, I mean, I think that they're really,  they don't use the type of tools that I think that they could use to be very effective. I think that part of it is they have an aversion to anything that they don't know.  Secondly is, I think that she's overwhelmed.  And so I think what needs to happen is that--people slowly, slowly but surely,  wins with using a particular feature.  And, or makes great waves and nothing negative occurs.  And as result of that, I think that is the Gold Rush, In a sense begins--I think that a good example is, as Jim had mentioned,  we have a guy named David Vitter, he's running for US Senate, I'm sorry, governor, and he's a U.S. Senator, and basically--he probably, I think is mastering or his campaign is mastering online everything, and although he himself certainly I don't think he's got the knowledge, experience and so  on.  But still, he's taking the risk in and it's working for him.  I think it's working tremendously for him.  One thing he did, that I had not seeing anybody do was to--last, I guess couple months ago take a video of himself during the middle of the campaign.  And I think he's probably using iPhone or Android and then he put that up and edited it,  put it up, and sent it out by email to his  eighty thousand, hundred thousand followers or so.  So the message that he wanted to get across had to be done very quickly-- it wasn't something he would be able to spend a lot of time planning, going to a studio etc.  It was something that he wanted to get it out there right away and that's the real benefit of this type of technology that you are able to get information out right away.  It may not be, as you know, Scott, since you've dealt with this for many years,   Its certainly not TV quality, you and I talked about that in terms of not being TV quality.  But,I think people are getting used to that.  I mean David Vitter being a really prime example of that, of all people I would have thought would have been adverse to it, it would have been David.

I even saw our Governor Bobby Jindal who's on the road and Iowa for President, and  he wanted to get something out, I forget what the issue was, but it was important to him, and so he had a basically selfie video that he took and he put it up and put it up on Twitter and Facebook I believe, his other social media.  So, people are getting used to it, more used to it.  Their seeing the winners use it, and I think that as the technology evolves, it's just a question of more people becoming acquainted and people like you Scott and others and hopefully myself and Jim--we're aware of this, we've used it, we've figured  out the conflicts or whatever it may be, not all the time, but hopefully many more times than not.

So  that's what I think in in a nutshell.

More in this category: « Will conservatives abandon Fox News after Trump dumping? Jindal's Louisiana miracle for his Presidential camapaign had bad day »
back to top