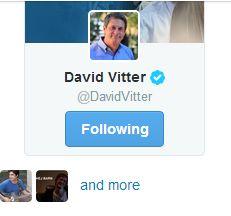 Below is part I of that discussion is below.  Part 2 will follow soon.

SABLUDOWSKY:  The big question is what the heck is going on in the Louisiana governor's race?  Let me just read the numbers if I might.  The survey, from this from Channel 4 and it was from the Claris, Claris group and Ron Faucheaux.  I'm actually going to be talking to Ron doing something a hangout or something with him tomorrow but the survey statewide results-- Jon Bel Edwards 24%,  David Vitter 24%  Scott Angelle 15% and Jay Dardennne 14%   so.  Then there's undecided 18% which is still pretty significant I think and then there-- but at this point, it still David Vitter's heads-up, one to one, David Vitter was losing to all three.

And so starting with Lawrence if you don't mind, right now we're less than one month away, so what does this tell you?

CHEHARDY: Well it tells me that the governor's race could still be a potential contest.  All along,  everybody was saying, well, it's going to be David Vitter and John Bell Edwards in the run off and that's just the way it's going to be and David Vitter was going to win the right off since he's a Republican.  What this poll is indicating is that you know it is a competitive contest and that the most importantly that in the questions regarding Sen. Vitter against each of the other three candidates, he loses.  Now that's a theoretical world, it was really don't know what happens in reality as far as what happens.  But, that said, this still could be a competitive race. And it would not take much for either Scott Angelle or Jay Dardenne to make a move and replace Sen. Vitter in a run off spot.  But it's still David Vitter's race to lose. And, would have to see what develops. I do think that one thing that could be hurting him, is the constant barrage of negative that his campaign and his PAC are doing against the other two candidates, the other two Republican candidates. Trying to paint Scott Angelle or Jay Dardenne as either liberals or Obama-like, could be wearing thin with voters and it could backfire very easily on the Vitter campaign, so it's something that we ought to watch over the next few weeks.

BROWN: Well I agree with Lawrence in terms of his analysis, there's one factor and I'm not surprised, these numbers have not changed that much, this poll has more credibility because it's been paid for by media, and it is not a candidate's poll-- but it basically shows that Edwards, let me tell you what, I’ve seen several polls of people running for candidates.  I've seen one poll for some lady running for insurance Commissioner. She announced on Monday, they took a poll, she didn't, someone else took a poll and she's got 34%. Because the D's after her name. You see, nobody knows who she is, got the D after her name. So Edwards is holding a strong position with the D after his name plus he's a very progressive and a really good candidate, I think. So, he's there, Vitter has held his own as incumbent US Senator. He's spending lots of money and the others are down by about 10 points and got a big lead to go. I agree with Lawrence, it's going to be Edwards and Vitter, unless something very dramatic happens in the runoff.

Now, the thing that a lot of people are just salivating about, who are not Vitter fans, are the numbers that show he loses to the other candidates-- that's find it everything stood on par, on equal basis, but they're not. David Vitter has probably more money, saved back, then probably all the other candidates put together, he'll be able to raise a lot more money in a runoff and I think that money is going to be the deciding factor. There has been so much complaining about the negativism, negative--you know why? Because they work. And you're talking to a guy who has spent nearly $10 million in my political career running campaigns, eight state-wide races, and fortunately, I never liked it, I hate negative campaigns, but my pollster said Brown if he going to win, you've got to go for the jugular, and I did and I won the elections where I went negative. The only race that I lost, Stephen and Lawrence, I ran for governor and I played the good guy, “I'm going to change the state, I'm the good guy”, and I got shellacked. So negative campaigns work, and the point I'm making is when Vitter is going to be able to outspend his opponent in 3 to 4 to 1 and is going to be slash and burn, I think that's going to be a big big factor. So if I had to pick one person whose shoes to step in right now, unless something unforeseen happens, it would be Sen. Vitter.

SABLUDOWSKY:  Okay, now obviously, I wrote about this today on Bayoubuzz, the only independent poll as far as I'm concerned that has come out this year in terms of the Louisiana governor's race except for maybe the one that was by LSU, (but really didn't go into detail in terms of who's winning, who's losing, and all--it basically said that it was too early to tell, people weren't focused yet, anyway) was Bernie Pinsonat's poll SMOR's poll, and basically Vitter was doing a lot better. So, since then, there's been no independent poll, this poll. What Clancy DuBois said in his blog today, what it tells him is, that Vitter has lost his "soft" support, so what I call the hard core support is still with him. Which is roughly 24% but the soft support has gone elsewhere and distributed, I think, among all three major candidates

More in this category: « Left-PPP Louisiana governor's race poll accuracy dubious Chehardy: Will a Vitter loss, upset of century, occur? »
back to top