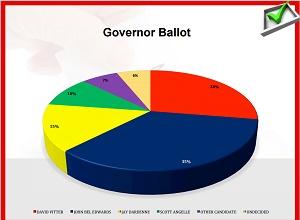 And, now, a new poll and interesting Louisiana governor's race poll and other statewide elections.

First, let's get the preliminaries out of the way:Lt. Governor race--John Young (R) and Kip Holden (D) tied at 27, Billy Nungesser 22 and Elbert Guidry trailing the undecideds at 6.  Undecideds garner 17 percent.

On the heels of the recent WWL-TV The Advocate poll, Triumph Campaigns has posted another poll on the upcoming elections.

The WWL TV-Advocate poll placed Vitter and Jon Bel Edwards at 24%, Scott Angelle at 15, Jay Dardenne at 14.  Interestingly, the Triumph shows that Edwards polls at 35, Vitter at 28 and perhaps a surprise, Jay Dardenne has over-taken Scott Angelle with 15 percent to  Angelle's 10%.

Thus, the findings of this poll corroborates the most recent three polls, Vitter dropping and Edwards climbing.  However, all recent polls have Dardenne and Angelle soundly behind Vitter.

Here is the introduction summary by the pollster

"Governor’s Race: Throughout the 2015 election cycle there have been discrepancies in 9indings on the Governor's race ballot from one 9irm to the other. Some have begun to question the accuracy of polling this cycle. Well, here is one constant throughout our surveys ... unless something changes drastically in the next 23 days, this primary is still going to end with Vitter and Edwards in the run-off. Multi candidate elections are about base vote. The two candidates with the biggest base vote move on. Worse case scenario for Edwards is he gets 90% of the African American vote (based on historical election returns) and 20% of the white vote (based on polling averages). This puts Edwards’ election night ballot score at 38%. Based on polling, Vitter can count on 40% support among white voters, which puts him at 29% on election night. The math is obvious: 38% (Edwards’ base vote) + 29% (Vitter’s base vote) means that one of the other candidates needs to get nearly 100% of the 33% remaining. Good luck."

Here is the poll and the crosstabs

Louisiana’s pollster, Bernie Pinsonat rarely minces any words.  Which is why we have coined is opinion columns and our interviews with him —“Bernie Burns”.

Today’s interview is no exception. Actually, it’s not just a "burner". It’s a scorcher.

The issue? The governor’s race and a recent poll by The Advocate and WWL TV which claims that John Bel Edwards and David Vitter are tied, but, the other two major candidates Lieut. Gov. Jay Dardenne and the Public Service Commissioner Scott Angelle, (along with Edwards) can beat Vitter in a runoff.