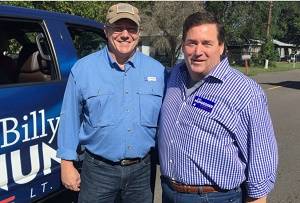 Quick political news for today as we savor the sweet scent of victory from last night's thriller in the dome.

Are we witnessing a resurrection of Louisiana governor Bobby Jindal’s presidential campaign from the political dead?

Right on the heels of a recent Clarus poll finding Jindal as the worse Governor in Louisiana in a survey covering the state's past  forty years, Jindal, who abandoned Louisiana for the hopes of finding fame and fortune on the presidential trail, might be seeing a rise in his poll numbers, at least in the deeply-religious caucus state of Iowa.

According to a recent poll in Iowa, Jindal is making some noise. The NBC/Wall Street Journal poll has Jindal all the up to 6% in Iowa, tied with Ted Cruz and Marco Rubio for 5th place.  However, according to Real Clear Politics, Jindal still scores .5% percent which number could result in his being excluded once again from the main TV debate stage.

Speaking of Jindal, his former Secretary of Natural Resources, is also taking advantage of the Duck Dynasty fame.  Jindal has gone out of his way to promote his relationship with the Ducksters, and now, Scott Angelle, is doing the same.

Before you could flick the switch on the tube after last week’s WDSU gubernatorial debate, the political winners were declared.  I received, from the Louisiana Democratic Party, at 7:00, a statement claiming that their candidate, Jon Bel Edwards was the clear winner of the debate.  Keep in mind, the email and the debate's end coincided at 7PM.  Then, before you could say the "John Kennnedy US Senate Campaign 2016", I then received another email but this one from our good Louisiana Treasurer.   Kennedy has endorsed David Vitter for Louisiana governor.  He is currently running for re-election but the smart money is on a sudden campaign for Vitter’s seat should the current US Senator (Vitter) win the governor’s mansion.  Kennedy's email said:

“Rep. John Bel Edwards gave a commanding performance at tonight’s gubernatorial debate, demonstrating his steadiness and seriousness of purpose while his Republican rivalswere consumed in the trivial back-and-forth of intra-party mudslinging. Edwards championed substantive policy proposals and reaffirmed his commitment to putting Louisiana first and getting our state government back to basics. After seven years of failed Republican policies, Louisiana voters are ready to elect a governor who will put people ahead of politics and turn the page on Bobby Jindal and David Vitter’s partisan rancor. None of the three Republican candidates offered anything new in the way of substantive leadership, or a meaningful change from the failures of the Bobby Jindal administration. John Bel Edwards was the only candidate who offered a clear plan to fix our budgetary nightmare, to restore funding to higher education, and to immediately expand access to affordable healthcare for working Louisianians. As successive polls continue to indicate, Louisiana voters are responding to the values and the leadership Edwards offers--- and his debate performance tonight demonstrated why. “John Bel Edwards walked off that stage tonight as the clear winner,” said Sen. Karen Carter Peterson, chairwoman of the Louisiana Democratic Party. “While the GOP candidates were falling all over each other, pointing fingers and tearing each other down, John Bel was connecting with voters with his message and his vision for the future. He won the debate tonight, and he’s going to win at the ballot box this fall.”

However, the email did not originate from Kennedy's campaign, but from the Vitter campaign's server.  The precise email was [email protected].  The email included a statement, “Click here to contribute to his campaign for governor which sent visitors to a the Vitter contribution page.

The two post-debate emails would be somewhat believable if, the timing and intent were not somewhat dubious.

This long Democratic email was nicely sent a nano-second after the debate ended.  That endorsement quoted Chairperson Karen Carter Peterson’s rendition that Edwards was the winner.

The Kennedy email also raises some questions.  When did Kennedy decide to write this glowing letter claiming victory for his candidate?  Did he suddenly decide to send an email out on his own, or, perhaps, was it planned in advance, maybe, way in advance?  After all, again, the email included a link to the Vitter campaign war-chest.  It was sent out via the Vitter server and received only twenty-minutes after the debate ended.

Lt. Governor Jay Dardenne, who has been criticized by Vitter's Super PAC for taking extravagant trips on our dime, is hitting the road again, but this time, on behalf of his own political campaign.  In fact, he might end up at a stop near you.

Lt. Governor Jay Dardenne resumes his Open Door Tour today with a stop at the West-Cal arena in Sulphur tonightat 6 p.m.
The four remaining tour stops are as follows:

Each tour stop is free and open to the public. For more information visitJayDardenne.com.

Former US Senate candidate, also possible candidate for US Senate to replace David Vitter, Col Rob Maness, USAF ret, and GatorPAC Founder, has endorsed Billy Nungesser  for Lt. Governor.   Maness cites in his endorsement that Nungesser is, a man that will help us "Drain the Swamp".