Despite absences at TV debates, will Vitter show Louisiana, he's the guy? 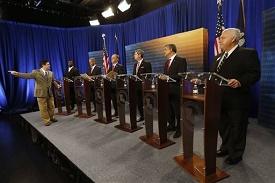 The lone Democrat among these major candidates, state Rep.John Bel Edwards, at least once a minute reminds audiences of his God-fearing life and/or he’s against abortion and/or he’s big on guns and/or he served in the military. When subjects last night concerned fiscal matters, he manages to squeeze in that the state doesn’t have to adjust Taylor Opportunity Program for Students awards, that transportation needs can be solved by not allocating money from the Transportation Trust Fund to state police, that New Orleans can have better police presence, that charity hospital partnerships can get a shot of additional funding, etc., without revealing from where the money to pay for all of this will come. In other words, he preaches that all is well on the spending front, there’s no need to cut anything regardless of its policy value as revenue magically will appear to resolve it all.

The magic, of course, is the opaque idea that a reduction in tax credits will solve everything. Some of these are counterproductive and need excising. But Edwards is perpetrating a confidence game if he thinks these of this kind will be sufficient to balance the budget without any spending cuts. The only way to raise enough revenue would be to get rid of enough in credits to the point this becomes a net tax increase on the public, as those former recipients of credits will pass along their increased costs to the people.

In previous debates, Edwards also refused to adjust spending in problem areas, such as pensions, or to forswear policy that increased costs to Louisianans, such as indicating he would raise the minimum wage. Edwards should be truthful: he wants to raise revenue revenues on the backs of Louisiana’s people without any real regard for reforming unnecessarily redistributionist spending policy.

At least Republican Lt. Gov.Jay Dardennewas refreshingly more candid than Edwards. He talked about making spending adjustments, such as on TOPS, but also openly of tax hikes, such as on income, for revenue although saying those were last resorts. While appearing more honest than Edwards, last night he differed only in quantity, not quality in less willingness to raise revenues with more willingness to make spending adjustments, perhaps with more emphasis on the latter than the former.

If Edwards’ strategy was to obfuscate ideology and Dardenne’s approach minimizes it, by contrast Republican Public Service CommissionerScott Angelle’s has been to maximize it in a way to display conservative credentials. Of the three, he has spoken most resolutely against tax increases and emphasized, as he did again last night, that he would cut spending. And while in general philosophy he may have strived to separate himself the most from the other two, he is as nebulous on specifics of what programmatic changes he would make to curtail spending as Edwards is in terms of where he will find revenues that do not entail Louisiana’s citizens paying more directly or indirectly in taxes, where he typically asserts he will create efficiencies, such as last night’s mention of reorganizing transportation spending along regional lines.

Which means, if you want a governor who will pursue a broad strategy of reducing or ridding the state of unproductive tax credits and counterproductive spending choices while not taking more of what citizens earn, and can give specific examples addressing each of these concerns, you didn’t see that guy last night or at other debates. Yet they kept bringing up the one guy who might fit that bill.

Republican Sen.David Vitter, again, begged off the debate for Washington work reasons, but he was talked about in passing almost as much by the other candidates as they talked about their own agendas, reminding that theelection continues to be all about Vitter. But because he has made just a couple of these, neither televised in every market in the state, it’s hard for the general public to confirm that.

Apparently, he’s going to make an appearance at next week’s confabulation, and if he acts to fulfill the heretofore missing archetype many voters will give him a good reception. Admittedly, few people watch these events, but by his appearance at these he can provide this choice. By his deferrals, the attentive portion of that segment of the electorate is left wondering whether he’s the guy. Maybe he will answer that in the near future.