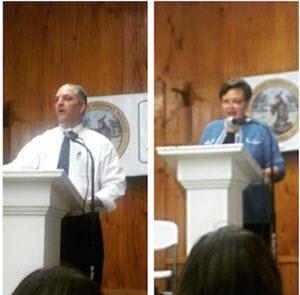 Unlike the Republican presidential race where outside status almost guarantees a higher spot in the primary polls, the opposite status might be true, here, in the Louisiana governor’s race.

Instead, the “outsiders” are having their say or at least trying to do so.  And, the candidates, sensing that outside invasion, are fighting back.

The Louisiana Republican Party has been somewhat quiet compared to other election years, in part, because it is fielding three candidates, Jay Dardenne, David Vitter and Scott Angelle.  Today, as it has over the past couple of weeks, the LAGOP painted Democrat Jon Bel Edwards guilty by association—that is, he was seen in the same hall as party chairperson Karen Carter Peterson, therefore, he is an untrustworthy liberal.  To prove its point, the GOP has provided a link to what it says is Edwards’ record.

The Louisiana Democratic and Republican Parties might not have gotten the message.   In the televised debate Wednesday night, the three candidates, present, were nothing but love and hugs towards each other.  The one not feeling the kindness was none other than David Vitter, the one republican who is likely to be in the runoffs with Jon Bel Edwards after the October 24 vote.

The emergence of attacking the “outsider” is particularly apparent this elections with the rise of the Super Pacs those nefarious shadowy organizations holding unlimited resources and corresponding clout.  These PACS are clearly making political parties, if not irrelevant, surely, not as influential as before.  People can give unlimited amounts of money to the PACS who can spend the money as long as it does not coordinate with the candidates. However, anybody watching the election scene even with their eyes closed would see the buffer zone created to separate the PACS from the candidates--is pure hokum.

As a result, all of the other candidates are hitting Vitter and he’s getting his claws into his opponents.  Surely, the political parties are beginning to pull more weight than it has this season.  But, the real clout lies with the PACS, which packs one helluva wallop with each commercial punch.

So, the attacks against the “outsiders” go like this:

Jon Bel Edwards, today, is complaining that Bobby Jindal and the national Republican Governor’s Association is out to torpedo his chances with a sizeable million-dollar-plus ad buy.  Jindal recently presided over that organization.

So, it’s Jon Bel Edwards vs. the Outsider, Bobby Jindal (which is fair game, considering his presence outside of Louisiana more than his working from home) and the RGA

Then, Jay Dardenne has launched a TV ad, which goes against the outsiders who have been attacking him, left and right, although, those outsiders might say they themselves are attacking the left—namely,  Dardenne.   Without naming names in the slick TV ad, Dardenne seems to be referring to organizations such as The Fund for Louisiana Future, the David Vitter mega-Super PAC.  That organization, has been the recipient of close to one million dollars from Vitter’s own US Senate campaign, which up until a recent court ruling, was deemed to be an outsider, not being able to transfer funds to the inside candidate campaign.  Vitter and company outsmarted the State of Louisiana and sent his Senatorial money around the corner, to the SuperPAC, who, is transferring the cash in the form of TV ads benefiting the US Senator.  Interestingly, in Dardenne’s ad, the Lt. Governor is asking for peace and harmony, yet, he claims the “outside” force are talking like  conservatives, but in reality, it’s a liberal in its governing.

David Vitter and Scott Angelle join it with the “damn the outsiders” complaints.  Vitter has been hit by two PACS, one in particular, funded by a Baton Rouge trial lawyer.  Angelle, has taken his shots against Vitter’s Super PAC for their running “deceptive ads” misrepresenting the facts and Angelle’s campaign positions.

So, Just who will win the battle of the new and intriguing Louisiana political “outsider vs. inside” contest?

Don’t know.  But, we’ll soon find out as we’re now outside only two weeks until primary election day, October 24.

Gubernatorial candidate John Bel Edwards commented on the first ad released as a part of the Republican Governor's Association (RGA) million dollar effort to attack him leading up to the Oct 24th election.

The RGA was formerly chaired by Louisiana Governor Bobby Jindal. “The money behind these attack ads is coming from Bobby Jindal’s organization,” said Edwards. “This is a last ditch effort to maintain his strangle hold on Louisiana and stop the only candidate for governor that will truly expose and change his broken policies.”

The ad claims that Edwards plans to raise taxes. In fact, Edwards has proposed lowering personal income taxes from their current two, four and six percent levels to one, three and five percent. Edwards’ plans to deal with Louisiana’s chronic structural budget problems are focused on ending expenditures, not raising taxes. His record reflects the same approach to budgeting. “In 2013, I led a bipartisan coalition to pass the only truly balanced budget in the Jindal years. We didn’t raise taxes to do it,” Edwards said.

The ad also cites to Edwards’ legislation that would bring $16 billion in federal taxes back to Louisiana to finance healthcare, as an attempt to “expand Obamacare.” Edwards sees things differently, “Bringing $16 billion of our taxes home is probably the most fiscally conservative idea that has been suggested to finance healthcare since Bobby Jindal took office,” he said.

Edwards’ healthcare legislation was estimated to save $52 million for the state in the first year alone by the independent Legislative Fiscal Office, and would have prevented the federal government from sending $1.6 billion a year in Louisiana taxes to other states. “Fourteen Republican governors who are members of the organization buying these ads have already done what my legislation proposed we ought to do,” said Edwards.

Asked about how the ads will impact his strategy Edwards said, "The polls show I'm viewed as the most trusted, least partisan, and least Jindal-like candidate. The best way to respond to lies is with truth. I've been responding to Bobby Jindal's lies for eight years. And I've gotten pretty good at it."

FROM THE DESK OF THE LOUISIANA GOP (SEE PHOTO ABOVE)

If you remember, Peterson was the state senator who called opponents of Obamacare racistsback in 2013. She represents the most radical wing of the Louisiana Democrats.

Gubernatorial candidate John Bel Edwards is a liberal Democrat cloaking himself as some sort of faux conservative.

John Bel Edwards has spent the last year trying to pull the wool over Louisiana’s eyes. He’s tucked his liberal record away and tried to avoid discussing it at all cost.

With another disappointing gubernatorial debate behind him, Public Service Commissioner Scott Angelle’s support in the race for governor remains nearly flat. Angelle has failed to connect with voters or to meaningfully distinguish himself from the other Republicans running to be the next Bobby Jindal, and with barely two weeks left in the race--- he still hasn’t addressed lingering questions about his accountability for the Bayou Corne sinkhole disaster.

When hundreds of Louisiana families were losing their homes to the sinkhole crisis in Assumption Parish, Scott Angelle cut and run. He abruptly left his post when he was needed most, to run for his current office as Public Service Commissioner. In contrast, the new front-runner in the race for governor, Rep. John Bel Edwards, has never faltered or backed down in a lifetime of service--- first as a leader at the United States Military Academy at West Point, and later as a representative in the legislature. There, he has led the fight against Bobby Jindal’s disastrous failed policies and worked relentlessly for the good of his constituents. He has never given up, and he’s never walked away from a crisis.

“When the sinkhole was swallowing houses, Angelle was running for the door. Louisianafamilies deserve a leader they can count on, one who will put Louisiana first,” said Stephen Handwerk, executive director of the Louisiana Democratic Party. "Scott Angelle was Bobby Jindal's top lobbyist leading to the huge cuts to Higher Ed, now he wants us to believe him when he says he will reverse course?  The only man running for governor who has a record of standing up to the failed policies of Jindal and Angelle is John Bel Edwards."

AGREE OR DISAGREE? TELL US WHAT YOU THINK