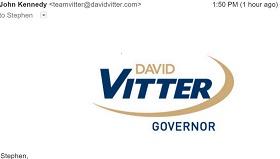 Two political proxies chimed in today in response to the Times Picayune’s endorsement of David Vitter for Louisiana governor.  The first response came from Treasurer John Kennedy.  The second, from  Stephen Handwerk of the Louisiana Democratic Party.

Tag Team Kennedy, dba Team Vitter, has been the most vocal statewide public official in support of the US Senator.   Within minutes of the close of the only televised debate in which Vitter participated, Kennedy sent out an email (from TeamVitter.com) --claiming the Senator won the debate. The circumstances of the timing of the sending of the letter plus the use of the Team Vitter email account, is suggestive that the glowing support by Kennedy was not spontaneous, but planned, regardless of Vitter's performance.  Both of those emails from Kennedy were sent via the Vitter campaign server, not from Kennedys own campaign server.

Why would the email be sent via the Vitter server and not from that of the Kennedy campaign?

I suppose the letter is being sent to the Vitter’s email list and not to Kennedy’s own email list, unless Kennedy’s campaign has shared his campaign list with Vitter.   Kennedy is running for re-election although many pundits believe, should Vitter win the governor’s seat, Kennedy will then run for Vitter’s US Senate seat, with Vitter’s blessing and support.

Here is Kennedy’s missive endorsing the Times Picayune own endorsement of Vitter:

You really need to read this editorial by the New Orleans Times-Picayune endorsing David Vitter for Governor. Here’s a link.

They hit the nail on the head highlighting David’s bold plan to lead, and also his proven record. You know, my biggest pet peeve is the gap in our state budget that I estimate to be more than $250 million. That’s just nuts. This editorial shows that David is the leader who can take that on and get Louisiana out of this fiscal mess.

Read some of the excerpts from their editorial below, including about David’s plan to tackle the budget challenge. Read the full article here.

“We can't go on like this. Our state needs a committed, resolute chief executive with a desire to govern and a plan to lead on many fronts.

“David Vitter is that leader…

“…he has fought against the good-old-boy status quo. He succeeded in passing legislation to limit how many terms Louisiana lawmakers can serve. That was no small feat.”

“He also has stood up for his constituents.”

“He fought to hold the Army Corps of Engineers accountable for the levee failures and to get recovery resources for South Louisiana, including essential funding for coastal restoration.”

“We are convinced that Sen. Vitter, having witnessed the paralysis of government in Washington, will understand the need to build consensus while not giving in to the forces that keep us mired in mediocrity.”

“Despite a reputation for going his own way, he has shown an ability to work collaboratively.”

“…we believe he has the ideas, the experience and the skills to help Louisiana thrive.”

I’m supporting David Vitter too, and hope you join me.

The Louisiana Democratic Party had their own sour grapes thoughts regarding the credibility of the TP endorsement.   One can easily assume the Party is bewildered and facetiously takes issue with the state’s second largest newspaper’s backing:

Correction: An editorial in this Sunday’s edition of The Times-Picayune referred to Sen. David Vitter as a “leader” and indicated that he would “understand the need to build consensus.” Further, the article stated that the editorial board would “take him at his word.”

The Times regrets the error.

(As do Louisiana voters.)