A curious Vitter video of Dardenne emerges, but why? 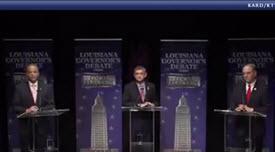 The election process can be quite ugly and dastardly deceptive.

Our politicians and now SuperPACS, with unlimited money, use soundbites for TV commercials, to get their packaged messages out to persuade us that only their candidate "cares", or that their opponents are evil budget busters deemed to destroy society as we know it.

Unfortunately, with less than two weeks left in Part I of the Louisiana governor’s race, the images and voices we see on television and radio (and surely over the Internet) will have more influence over the emotional decisions we make at the polls than will our studying and analyzing the facts, details and policy papers.

Which is a darn shame.

Our politicians and their advocates know this which is why they bombard us with slick information that often tells us half-truths, if any truths, at all.

Yesterday, I encountered a video on social media by a conservative blogger avidly supporting David Vitter.

The headline of his blog post, said, “Tell Me Again How Dardenne Is A Conservative

The post itself went futher: You know it's bad when the Democrat in the Governor's race won't consider personal tax increases, but Jay Dardenne will.

The blog then presented a video clip of a recent TV debate, one that Vitter did not attend, by the way.  The clip showed a very short (and I believe misleading) snippet of the issue, nothing more.

However, since I had watched the debate, I immediately knew that Dardenne said more about the personal income tax issue than the video snippet revealed.  Likewise, I felt the snippet and blog comments did not represent Dardenne's argument.

I asked the blogger, on social media, questions such as--why did he post only a snippet and if he post the video.  He said to the latter question, "no".

He defended his actions and the video, responded  (referring to Dardenne), "He did say he would support an increase on personal taxes".  The blogger also said I should watch the video again.  And then said it was a waste of time talking to a “liberal mindset”.

A typical response by those who don’t like to be challenged, whether from the left or the right.

The issue here is not liberal versus conservative.  It is about honesty and fairness in politics. 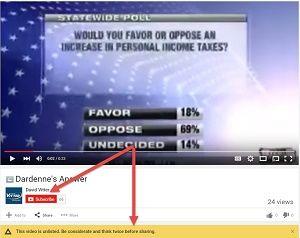 Interestingly, the video was not posted as "public" as are the other Vitter ad promotions in that account.  This one, in particular, as the yellow band shows, is "unlisted", which means only those who receive the video can watch it, or share it.  This exact video was uploaded by Team Vitter who obviously provided the video and link to the blogger.  In turn, the blogger posted it on his blog and then further posted it on social media, such as Facebook.  Why was this particular video (that to me does not tell the entire story at all) not posted publicly by Team Vitter, as are all of his other videos with which the campaign wants to be associated?  This is a question crying for answers.

By contrst, here is a video of the debate segment which i located this morning.   I took a snippet of what I believe is the relevant portion of the tax discussion.  The entire video is over 50 minutes and I captured, in what I believe to be in entirety, only that portion I think directly shows the complete conversation about this issue.

But, the one fact I feel you cannot deny--the abbreviated and intentionally cut snippet on the blog and social media originating from an unlisted video on Vitter's campaign Youtube site, hardly tells the whole story, or even close to it--to even pass the smell test.

Personally, I have not made up my mind for whom I will vote.  I might vote for one of the republicans.  I might vote for the democrat.  One thing for certain, while I disagree with Jay Dardenne on a number of issues,  as for as this one point only, I find it refreshing to see a politician face the voters, tell us that the patient is severely hemorrhaging and acknowledging we need to consider all possible remedies because what we have been doing is not working.

In this case, stating one will consider a solution in no way means he will advocate for it but merely stating that everything must be on the table for discussion.

More than anything, it is time for all of us to stop being persuaded by advocates with a politicl mission and by candidates who only want to be elected and whose campaigns will abuse the system (and the facts) to make sure they reach that goal

While I am sure that there are many who will claim the other side does the same, I offer you the opportunity to share your information with me for future review.

It is sad to see campaigns and others twist messages for political advantages.

As it relates to our finances--the bottom line--our state is at the crossroads.

We cannot continue to tolerate annual budget deficits in the hundreds of millions to billions of dollars, with businesses shouldering all the tax increases like this year, with the state being nearly 20 billion dollars in the hole in long-term debt and with our roads, bridges and highways needing over 12 billion dollars in fixes.

Telling the world that we have a serious problem and that everything must be put on the table is the only honest way to deal with our state’s fiscal mess impacting our healthcare, education systems--and our very way of life.

Feeding us honest ads and open messages seeking real solutions to legitimate problems, might not win campaigns, but, it will go much further than the win-at-all-costs abuse we are currently witnessing.

These decent, fair and honest messages might not be the most “politically correct” or effective things to say.  They surely are not going to pull the heart strings of voters as commercials telling us that politicians care.  They won’t motivate segments of our political community hungry for raw meat to feed our frenzied angers.   Nor will they push the hot buttons as effectively as those ads that taunt foolishly to remind the public that a candidate was a bad husband.

But, truth in our politics for this and other elections, albeit poorly packaged, is essential to civic discourse and to our problem solving.

Anything less will continue damaging the public trust in our system of government and in our leaders.   Anything less will do little to fix our serious problems as we teeter on the rims of fiscal and spiritual bankruptcies.