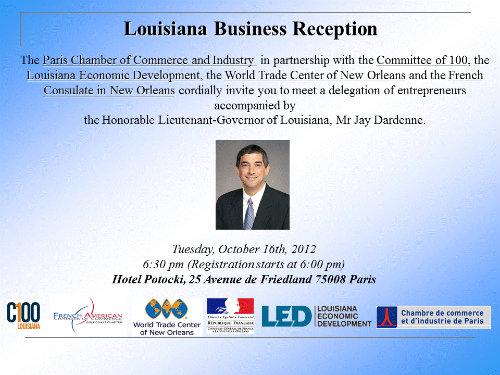 Now, for September 26, here's what our Louisiana not-for-profits and non-governmental organizations are doing for this community:

State of Louisiana Trade and Investment Mission to France

Key Participants and Organizations from Louisiana

Overview: With a GDP of approximately $2.56 trillion, France is the world’s sixth-largest economy, and the second-largest trading nation in Western Europe. Over $1 billion worth of commercial transactions take place each day between the United States and France. Through Q3 of 2011, Louisiana’s annual exports to France totaled $541.8 million.

Mission Purpose:  This multi-city trade and investment mission will provide Louisiana elected officials and business leaders with the opportunity to meet with CEO’s of some of France’s largest multinational corporations and discuss opportunities for business development that will yield favorable outcomes for French and American companies.

Tourism & Cultural Economy:  Lieutenant Governor Jay Dardenne will lead this sector engagement.  LT Gov Dardenne was reelected to a four-year term as Louisiana’s Lieutenant Governor in October 2011. He previously served four years as Secretary of State and fifteen years as a State Senator.  The LT Gov Dardenne is responsible for the Louisiana Department of Culture, Recreation and Tourism. These offices exist to preserve, showcase and market Louisiana’s rich cultural heritage to those within and outside of our state.  Visitors typically spend more than $9 Billion in Louisiana each year.  Over 168,000 Louisiana residents are directly employed in Travel & Tourism industry in Louisiana.  LT Gov Dardenne will be meeting with the Minister for Foreign Affairs and signing of the LOUISIANA – FRANCE Cooperation Accords with the Minister for Foreign Affairs and Minister for Education which are very significant milestones for Louisiana.  Continued discussions regarding promotion of Louisiana (business and/or tourism) as well as meeting with the Secretary General of the International Organization for the Francophonie (OIF Mr Abdou DIOUF) and meetings at the French Senate and Assemblée Nationale with Chairs of the two Chambers and representatives/senators from the US-France Friendship Groups are key initiatives in our mission.

Digital Media & Technology:  Louisiana has developed a commanding position in the United States in the field of digital media, film and sound recording.  Louisiana seeks to find companies with like interests which might mutually benefit by US expansion or location or by bringing newly developed technologies to the European or American market place.   Louisiana is presently participating in a wide array of marketing activities designed to generate “business to business” (B2B) opportunities.  Louisiana views the developing digital media/film/sound recording industry as an area that holds great potential for increasing jobs and global investment.  Louisiana participates in the MIDEM Music Conference which is the international music market from all genres for all professionals providing business and networking market place opportunities in Cannes, France each year.  Additionally, Louisiana participates annually in the Cannes Film Festival (CFF) which is the globally important showcase for European films.  Louisiana participates at MIDEM and CFF to gain media exposure and interface with major film and music producers.  Our efforts are focused on communicating information relative to the powerful financial incentives that Louisiana has in place to support film and digital media productions.  Louisiana is attracting film crews seeking to produce new films from all over the globe that wish to take advantage of low production costs and robust tax incentives.

Agriculture:    This is one of the largest sectors of Louisiana’s economy.  At more than $30 billion, agriculture and forestry combined make Louisiana a very powerful agriculture production state.  Nationally, Louisiana ranks second in the production of aquaculture and sugarcane, third in rice production and milling, fourth in sweet potatoes, and sixth in grain sorghum.  The Louisiana Department of Agriculture will be in Paris October 18-23 participating in the SIAL Trade show in Paris seeking to connect small and medium sized Louisiana businesses with the opportunity to sell Louisiana agricultural products into global markets.

Energy:  Louisiana is a “platform for opportunity” in the energy sector.  Supported by an industry-friendly business environment Louisiana invites foreign investment and global partnerships.  International holdings total nearly $21 billion (9th largest state in USA) and Louisiana’s access to the Gulf of Mexico and Mississippi River make Louisiana the energy ‘Gateway to the World’ in America.   Louisiana is a significant part of America’s energy industry supporting a total refining capacity – 2.99 million bpd (second largest in America from 18 refineries producing 15 billion gallons of gasoline per year.  Louisiana has more than 83,000 miles of pipelines moving natural gas, crude, and refined products.  Today, Louisiana is a global leader in the development of liquefied natural gas (LNG) exportation.  Recently discovered the “Haynesville Shale” represents an “elephant” find that ranks among the world’s largest natural gas discoveries. With a staggering volume of natural gas supply, and in the infrastructure in place to take advantage of it, Louisiana clearly is one of the world’s best locations for natural gas-related investments.  The U.S. Department of Energy has gotten applications for nine export facilities, three of them in Louisiana.  The proposed U.S. plants would be able to export 14.8 billion cubic feet of natural gas per day — nearly 40 percent of it from facilities in Louisiana.  Currently, several LNG import terminal investments are proposed for France.  Continued dialogue and cooperation in the energy sector could be very beneficial to French and American companies.

Health/Biotechnologies: Louisiana produces first-class biotechnology activities in its institutions, research, corporations and incubators.  Participants in the development of biotechnology and bioscience exist in significant numbers in the cities of Baton Rouge, New Orleans and Shreveport.  Louisiana communities have recruited from prestigious educational institutions, healthcare centers, biotech incubators, biotech venture capitalist groups, and many other entities to form aggressive businesses and support organizations.  The BioDistrict New Orleans is anchored by a new $47 million wet lab and office space ready to accommodate new tenants.  This New Orleans BioInnovation Center is offering its services to grow local biotech startups and capture a broader segment of the research market. Also evolving is the four-phase, 14-month master planning process to insure the proper development of this BioDistrict.  Pennington Biomedical Research Center in Baton Rouge has been recognized as one of the highest ranked institutions in “The Scientist’s” annual listing of Best Places to Work for Postdocs.  The publication surveyed more than 1500 postdoctoral fellows globally and ranked Pennington Biomedical number 4 on the 2012 listing, among a highly prestigious selection of research institutions.  The Virginia K. Shehee Biomedical Research Institute in Shreveport  is a 10-story, 160,000 square foot research facility with 56 state-of-the-art labs currently occupied by scientists and researchers from Louisiana State University Health Sciences Center. Opened in February 1994, the Institute houses more than 250 researchers, technicians and support personnel working to find cures to such diseases as stroke, cancer, arthritis and Alzheimer’s. In addition to laboratories, the Institute is home to the Biomedical Research Foundation’s administrative offices and the PET Imaging Center.  The laboratory facilities contain core research space for monoclonal antibody production, oligonucleotide and peptide synthesis, gene cloning, DNA sequencing, high performance liquid chromatography, tissue culture, positron emission tomography, magnetic resonance spectroscopy and electron microscopy. The Institute was built as a result of a $48 million public-private partnership.

LED stands ready to assist French companies or Louisiana companies that are interested in global expansion of their operations and market share.

Mardi Gras World, in partnership with a number of local businesses and supporters, is planning a fundraising event for injured Tulane University student Devon Walker from 8 p.m. to midnight on Thursday, Sept. 27. Walker fractured his spine while making a tackle during a football game two weeks ago.

A $20 minimum donation is being requested at the door, and larger donations are encouraged. One hundred percent of the cash donations will go to the Devon Walker Fund to help defray Walker’s medical and other costs.

“As the father of two boys who play football, my heart goes out to Devon and his family,” said Barry Kern, the President and CEO of Mardi Gras World and Tulane University alumnus. “Mardi Gras World hosts events throughout the year, and when I heard Devon’s story, I knew we could help by putting on a world-class fundraiser to attract as many donors and supporters as possible.”

T-shirts and charm bracelets featuring Devon’s jersey number eighteen will also be on sale at the event to support the Devon Walker Fund.

The event will offer donors great food from some of New Orleans’ finest restaurants and entertainment by local performers.

Mardi Gras World is hosting the event with a group of Tulane University alumni and students who wanted to organize a community event to raise money to help Devon and his family.

Mardi Gras World is seeking businesses to help sponsor the event through in-kind contributions. If you would like to participate please contact Paolo Lossi at 504-527-0393 or [email protected].

Here is the locations for the Louisiana Technology Council’s Road tour:

Visit the links below to register in each city.  Each event will be from 5:30-7:30pm.  Attendance is free for all!

BGR is pleased to announce that Kathleen Parker will be the guest speaker at the 2012 Annual Luncheon. Ms. Parker is a Pulitzer Prize-winning journalist and nationally syndicated columnist. Ms. Parker writes for Newsweek magazine, as well as USA Today. She is a frequent contributor to CNN and NBC.

Purchase tickets for this Event online.

New Orleans is pursuing federal Medicaid expansion even though Gov. Bobby Jindal opted out earlier this year. According to the city’s Health Commissioner Karen DeSalvo, "Should the governor not expand Medicaid as allowed through the Affordable Care Act, our administration is working with the (federal) Department of Health and Human Services on looking into some options to provide universal coverage for our residents."

A recent report by LBP found that 240,000 working Louisiana residents statewide would gain health coverage in 2014 if the whole state were to take advantage of the Medicaid opportunity.

United Healthcare may sue the state for awarding a contract to manage state employee health plans to Blue Cross and Blue Shield of Louisiana. United alleges that Blue Cross/Blue Shield received the contract, worth $37.8 million a year, due to flawed analysis, objectionable scoring and favoritism.

Fresh on the heels of last week’s dismal of poverty numbers, Louisiana Economic Development Secretary Stephen Moret hits back with a letter to the Advocate arguing that Louisiana is doing better than ever.

The House Health and Welfare Committee is scheduled to meet Oct. 4 to discuss cuts to LSU’s public hospital system. But the Times-Picayune’s James Gill thinks the Legislature will continue to be pushed around by the governor’s office.

Lawmakers increased the number of charities and nonprofit groups that can receive state income tax refunds from taxpayers, who donated $333,159 during fiscal year 2010-2011. Some of the organizations added to the donation lists may be dropped, however, due to a state law requiring the Department of Revenue to remove from returns any organization that did not receive at least $10,000 in donations for two consecutive years.

Entergy is attempting to join a regional transmissions group to save the company and its Louisiana customers over $1.4 billion over 10 years. The transmissions group, Midwest Independent Transmission System Operator, will make sure that Entergy’s customers receive energy from the least costly sources.

Finally, the Advocate reports that landowners interested in selling property to help Louisiana and federal coastal forest conservation efforts have until Friday to apply for part of the $7.4 million available in the second round of applications.