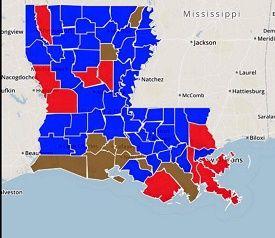 State Rep. John Bel Edwards, it appears, could return the governor’s office to Democratic hands.  He had an impressive 40% of the vote in the gubernatorial primary on Saturday.

Edwards carried 45 parishes, while Vitter carried 10 and Angelle 9. The runoff between Edwards and  Vitter, set for November 21, is expected to be negative, contentious, and expensive.

Vitter fired the first shot across the bow at his election night party by saying that a vote for Edwards is the same as a vote for President Barack Obama.

Edwards fired back that he hoped Vitter does not want to start comparing associations, a reference to recent revelations about Vitter’s prostitution scandal.  And Vitter need to remember that Obama in more popular in Louisiana than its Republican governor.

And, as expected, incumbent Attorney General Buddy Caldwell is in a runoff with former U.S. Rep. Jeff Landry.  Both are Republicans.  Caldwell led in the primary with 35% and Landry had 33%.

(Image above: From the gubernatorial election map Saturday Oct. 24, provided by The Lens)

More in this category: « Crouere: Vitter is probably weakest GOP run-off candidate next to David Duke Vitter's campaign, supporters malign pollster Verne Kennedy, and so? »
back to top