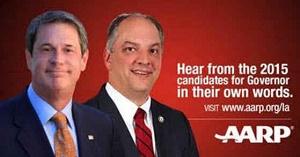 The Vitter vs. Jon Bel Edwards beat goes on.

So, what happened Saturday when Democrat Jon Bel Edwards ended up with 40 percent of the vote
against three Republicans, particularly, one with almost universal name recognition, David Vitter?

The AARP wants to chime in on the Vitter-Edwards contest:

“AARP Louisiana’s membership comes from across the political spectrum, but our members share similar concerns about access to health care, the role of caregivers and the ability to age while staying in their homes,” said Denise Bottcher, AARP Louisiana’s interim state director. “We want our members, and all older voters, to understand exactly where the candidates stand, in their own words, before they enter the voting booth on November 21.”

“With this runoff election, voters will be setting the course for the future of our state, which faces major budgeting challenges, especially around health care financing,” said Andrew Muhl, AARP Louisiana advocacy director. “Older voters have the potential to set the tone for the next four years and we hope this Video Voter Guide will help our members and other voters prepare to vote in the runoff.”

To compile its Video Voter Guide, AARP invited all major candidates to participate in on camera interviews with the same topics and questions in advance of last Saturday’s election. AARP additionally hosted a candidate forum for its members in August.

The Louisiana Democratic Party has asked questions about what is is calling spygate.  Think it really wants any answers?

BATON ROUGE – With strange new developments continuing to unfold every day in theongoing “spygate” scandal hanging over Sen. David Vitter’s flailing gubernatorial campaign, unanswered questions are piling up. Vitter’s habitual fear and hostility when it comes to accountability are only being magnified by his campaign’s failure to address the scandal with transparency and honesty. Here are just five of the most pressing questions:

With every new development of the spy story that comes to light, a different motive and target is put forward. Was Vitter’s hired gun targeting Sheriff Newell Normand, who declined to endorse him? Were they after John Cummings, a private citizen who supported his opponent? Or was former police officer Danny Denoux the intended mark? A slew of options, and none of them good.

Hiring bungling amateurs from out-of-state to spy on Louisiana voters who happen to disagree with him, and paying $130,000 for the services, suggests a relentless approach to surveilling and intimidating the very voters he is meant to serve.

He himself remains adamantly unwilling to answer for his own crimes. For a Louisiana lawyer who pretends not to understand the state’s criminal code, he suddenly developed a very cavalier attitude about what constitutes important crime. As Scott Angelle pointed out, Vitter seems to want one set of rules for himself, and another for everybody else.

·               Why are journalists and bloggers being targeted and intimidated by operatives on Vitter’s payroll?

Local journalist and blogger Jason Brad Berry, whose work investigating new claims arising from Vitter’s notorious “serious sin” caused such damage to Vitter’s campaign near the end of the general election, was targeted and harassed by the same operatives trained on Sheriff Normand. What was he on the verge of finding that led Vitter’s team to lash out so clumsily?

Vitter begged off appearing in front of Louisiana voters at debates throughout the general election, hiding behind his obligations in Washington. With his senate colleagues debating spying legislation, was it inconvenient timing for Vitter to take a stand? Is spying at that level likewise “no big deal”, in his estimation?

.@JohnBelObama @JohnBelforLA 28/28"100% votes Pro-Life" his entire career as politician. Thanks for sharing. Love when you truthful #lagov

More in this category: « Election wrap and what Edwards, Vitter must do to win Why was Louisiana election turnout so poor? »
back to top