Houston, we've got a HERO with equal rights ordinance defeat 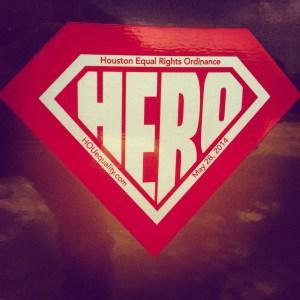 Congrats to the voters in Houston who turned down the Houston Equal Rights Ordinance (HERO) in yesterday's election. The law offered broad protections to homosexual and trans gender individuals along with other minority groups. It failed by a huge 61-39% margin of Houston voters after a very contentious campaign.

The voters recognized the hype and hysterical claims from supporters and decided that the ordinance was not in line with their values. Even though Houston is a relatively liberal city, unlike most of Texas, the voters viewed this measure as a social experiment being pushed too far and too fast.
While supporters said the measure helped fight ongoing discrimination against minorities, opponents of the law believed the ordinance would have allowed men dressed as women to use the bathrooms of their choice, creating uncomfortable situations for women and young girls in both private and public restrooms. It also may have given sexual predators in Houston even more access to vulnerable women and girls.
Not surprisingly, liberal activists, Hollywood stars like Sally Field, Hillary Clinton and the Obama White House strongly supported the measure. In May, it was approved by the Houston City Council and became law. Fortunately, conservative pastors took the city to court and the Texas Supreme Court gave the Mayor and City Council two choices, either repeal the law or give the voters a chance to vote on the ordinance. This forced the City Council to place the issue on the ballot.
The Mayor of Houston, Annise Parker, a lesbian activist, did not want to give the voters a chance to decide the issue. Her view is typical of so many liberals who want to force their will upon the voters. Whether the issue is affirmative action, gay marriage or benefits for illegal immigrants, liberals prefer to use to courts to pass their agenda instead of giving voters an opportunity to render a verdict.
The Mayor was upset about the defeat stating that it only lost because of "fear mongering." She stated that HERO was necessary to extend protections to classes of people that are regularly victimized due to their minority status. It banned discrimination based on gender, sexual orientation and a dozen other categories including age, religion, color, race and national origin.
In reality, the law was totally unnecessary as there are already legal protections on the federal level against discrimination for all voters.
The issue sparked a tremendous voter turnout, about double what has been seen in recent elections. Obviously, the real heroes are those Houston voters who refused to be coerced and intimidated by the liberal activists.
On Tuesday, at least in Houston, the liberal agenda suffered a massive defeat. In this day and age, any type of victory for traditional values needs to be savored.

More in this category: « Kennedy Poll: Edwards by 11, cites Vitter's attacks Today at 3pm: Edwards vs. Vitter, blab with pollster John Couvillon »
back to top