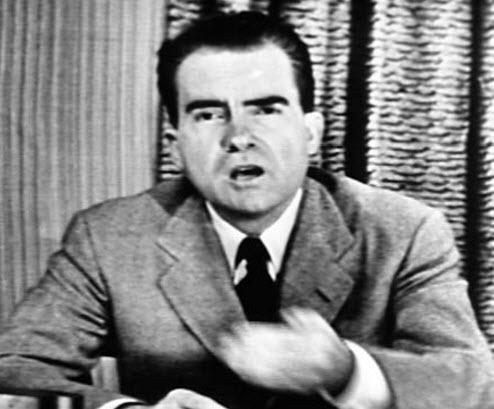 When i first saw the email and then the ad, i thought of Richard Nixon and his checker speech.

I know that Vitter has been compared to Nixon over the past few weeks, after his detective was caught spying.  His credibility became even more strained after Vitter did a somewhat odd, "I am not a crook" routine, telling WDSU reporter that the act--taking surreptitious videos and audio is not spying and was "silly".

Louisiana US Senator David Vitter, with less than two weeks until Election Day, behind in all polls against Jon Bel Edwards in his run for Governor, now just today, is reminding voters that he has had “hard times” and that his family forgave him.  In a new ad, named “hard times”, which video and information, he released by email to his supporters, Vitter looks right into the camera and compares his “hard times” to those difficulties Louisiana is now experiencing.

So, yep, I thought of Richard Nixon who used his dog checkers to his own advantage with a TV speech that turned Americans into forgiving lapdogs.

However, the ad and the very email raises even further questions about Vitter, his capacity for transparency and his very intentions.

For one, the political commercial comes days after a hard-hitting and controversial ad by Jon Bel Edwards--citing Vitter’s “Preferring Prostitution to Patriots” or the voter’s choice.

In the email today, his campaign sent to his followers, Vitter said:

“During the hardest time of my life, I found forgiveness from my family. God granted me the strength to overcome my failures, to lead a good life, and to be a better man. You have given me the opportunity to serve and fight for you, and for that I am incredibly humbled and grateful. As Governor, I know together we can be stronger, build a brighter future, and be the Louisiana we all know is possible.”

The ad itself had a different narrative, that said “Fifteen years ago, I failed my family, but found forgiveness and love”.

In the commercial, Vitter is trying to do a number of things:  He is presenting a more human underside as he knows he has not been perceived as being very likeable.  He appears to be claiming that because of his failings and hard times, and the way he has responded to them, he would actually be the right person to help Louisiana overcome our own troubles.

Indeed a powerful commercial, one with spiritual urgings to forgive the man who had asked for forgiveness.  How can anybody not succumb to such honesty, openness and humbleness?

Well, for numerous reasons for the ad is quite troubling and he has aggravated a bad situation and made it worse

Certainly, it is heartwarming that he said he received forgiveness and love from his family.  Again, he is not running for Father of the Year, but the husband of the state’s first lady, the state’s highest elected official.  He wants to be the governor of Louisiana.  He surely did not, in this ad, directly ask the voters for any forgiveness, though arguably, that was the hidden message.  Above all, this was a purely political stunt.  Worse, after seven years of a governor saying anything to improve his own personal political standing, this state, to succeed, needs a person, whose word, we can trust.

The new ad also presents some very serious factual questions that needed many answers before, but now, since Vitter has opted to use his sin for his own political election advantage, we especially need answers now.

In 2007 when the scandal first broke, Vitter said nothing more than he had engaged in a “serious sin”.  Not “serious sins”, plural, but singular.

Never has he taken any questions about the facts involved.  His canned response has been his wife and family has forgiven him.  After 2010 after winning re-election, he conveniently started to claim it was now history and the voters have forgiven him too.

The discrepancy in dates might be a simple error in math.  Then again, it could be much more nefarious and deceptive, such as his now-renown vague “serious sin” cryptic response.

In particular, there is the issue of a New Orleans prostitute Wendy Cortez Ellis.  Unquestionably, Ellis’s story has not been very credible on various points.  The truth, however, nor has Vitter’s statements been very convincing.

Starting in 1999, reports begin to circulate that congressional candidate and then State Representative David Vitter was a client of a local prostitute named Wendy Cortez. According to GOP State Central Committee member Vincent Bruno, who worked in the campaign of Vitter's opponent, former Governor Dave Treen, Cortez approached him and other Treen volunteers with her claims about a relationship with Vitter. She was upset that Vitter was campaigning for Congress on a family values platform, while paying for her services on the side. Eventually, Treen decided not to use the salacious information in his campaign and Vitter was elected.

The Gambit has recently uncovered statements from a barber, whose shop existed across the Ellis apartment that Vitter is claimed to have frequented.  Sure, the barber might be lying or wrong but so far, all we know is, he claims that Vitter would get his haircut in his shop while waiting for Ellis.

In his recent investigation, Jason B. Berry of The American Zombie, claims to have gotten pregnant in 1999 with Vitter ending the relationship in early 2000.

In a recent video presented on The American Zombie, Ellis has later said their emotional relationship last a few years beyond that time period.

So, factually, what we are left with is this—a prostitute who has a serious veracity problem claiming a relationship somewhat supported by an disinterested eyewitness who so far, has no reason to lie –versus-- a politician who had a prostitution allegations lodged against within the very time frame in question, just a different location.  Although Vitter and his loyal supporters want everybody to have deep guilt for wondering about the truthfulness of his own explanation, it is most reasonable to expect that someone who was being accused of engaging in an act that would be a crime, to ensure that he would be as pure as the white driven snow.  Instead, we discover in 2007, that in 2001, roughly a year after these horrible  allegations,  he gets caught with his proverbial pants down, his phone number was found  on the DC Madam’s phone list.  And Vitter and his supporters demand that we accept him at his word over that of a prostitute with a history of lying?

While Ellis is hard to believe, it is equally difficult to believe a politician who has a prostitution cloud over his head and then shortly afterward, apparently engages in some prostitution acts that validates the horrible claims being thrown his way, a few years prior.

Again, the problem for Vitter is--he is in obvious desperation mode.  Only now is he willing to talk about his hard times.  But, only on his own terms.

In other words, he is saying: I sinned.  I was forgiven by my family and found love.  I recovered from rough times.  Louisiana is in rough times.  I fought through my demons and actually became a better man in the way I lived through them.  Therefore, I can fight for all of us in the same way.

And the soft sympathetic music plays on in the background.

What is good for the goose is, of course, good for the gander.  If Vitter wants to use his sin to say we should vote for him because of the way he handled it, then, he should walk through the very door he has now opened a mile wide.

So, here are my questions, hopefully, he will answer before Election Day.

How many sins did you commit?  What were they?

Did you have a personal relationship or prostitute relationship with Ellis and/or anyone else other than women associated with the DC Madam?

Why are you now claiming your “hard times” occurred 15 years ago?  What other relationships other than the one call in 2001 are you referring?

Why is it that whenever anyone has asked you any questions or made any comments about your ‘serious sin”, you have condescendingly ridiculeD them, punish them as if they acted as if the questions or comments are beneath all dignities?

Is overcoming adversities by demonizing others who feel entitled to understand your “trouble past”-- a strength that should honored or rejected?

So, before I would ever vote for David Vitter, I along with many Republicans and Democrats alike, want him to come clean.

Today’s political use of  scandal that David Vitter never wanted to discuss, further magnified by his own confused  facts and events, only illustrates the level of deception and confusion we can expect from Vitter if he were become this state’s leader.

Not only does he owe us an apology for what he did, but an explanation as to the real facts.  We don't need another Nixonian checkers speech, but a person who could simply and more than anything, sincerely, open up his heart and reveal for once, the truth, not his cagey political spots.

But for now, I would settle for his apologizing for using his troubled past as the very reason we should trust him in the future.