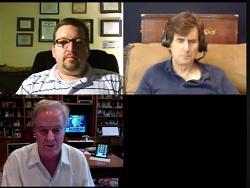 In what could be a rather surprising development, according to Pollster John Convillon of JMC Analytics, the Louisiana runoff appears to be generating more interest from those who are democratic-leaning and African-American.

Convillon, who previously polled Edwards with a twenty-point lead over David Vitter in the Louisiana governor's race has released his second report concerning early voters, that could portend what could happen election day, NNovember 21.

We are half way though with early voting, and with no early voting today for Veterans Day, there are three more days to early vote. What have the cumulative three day statistics told us ?

(1) Consistently higher turnout – For each of the three days of early voting, it has been consistently been higher than it was in the primary. Cumulatively, you’re talking about a 35% increase in early voting turnout (119,381 versus 88,184 in the primary);
(2) More Democratic – The racial composition of the early voters after three days was 69-29% white/black – after three days in the primary, it was 72-26% white/black. To put these numbers in proper perspective, the Louisiana electorate as of 11/1/2015 was 66-31% white/black.
To further illustrate the Democratic tilt of early voting, let’s look at the raw numbers: after three days, white turnout is up 30% relative to the primary, while 47% more blacks have voted, and 55% more Asians/Hispanics have. From a partisan perspective, this is additional confirmation that Democrats are more energized: 37% more Democrats (vs 34% of Republicans and 32% of Independents) have early voted. And the early vote thus far is 52-35% Democrat/Republican, while it was 51-35% in the primary.
(3) The larger parishes are early voting heavily – After three days, early voting has increased in 41 parishes and decreased in 23 parishes relative to the primary. Furthermore, the 41 parishes where early voting increased were generally urban parishes, and some of these urban parishes have seen spectacular increases in turnout: 109% increase in Caddo, 98% in Orleans, 89% in Bossier, 80% in East Baton Rouge, 68% in Ascension, 66% in Calcasieu, and 65% in Saint Tammany.
If we look at the primary vote of the parishes that saw increases and decreases in their turnout,the parishes that saw an increase in their early voting voted 41-23% for Edwards over Vitter, while the parishes that saw a decrease in their early voting voted 36-21% for Edwards over Vitter. In other words, Edwards gets a mild benefit from the spike in early voting.
(4) JMC’s “bottom line” – What do the cumulative three day numbers tell us about projected voter turnout ? While our predictions will be more accurate as we accumulate more early voting data throughout the week (in person early voting runs from November 7-14), we do know that in the primary, a record 21% of Louisianians voted early. Assuming a 21% early vote in the runoff, the early vote numbers thus far suggest a 45-50% runoff turnout (it was 39% in the primary).

More in this category: « Vitter v. Edwards debate, round one of the runoff Attend gubernatorial forum, who won debate Vitter or Edwards? PAC MEN »
back to top