Campaign Finance Director: Vitter is our hope on Syrian refugees in Louisiana 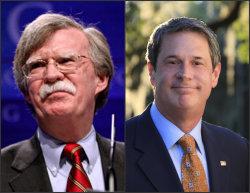 The David Vitter has sent out the following email to its supporters.  The focus is that David Vitter is the hope Louisiana needs to protect the state from dangerous elements such as the Syrian Refugees.


IN VIEW OF THE LAST TRUTHS COMING OUT... VITTER IS OUR HOPE!
Subject: Fwd: John Bel's Support Of Syrian Refugees

Sunday night John Bel Edwards released a statement on his facebook page (see below) that he would assist President Obama in bringing Syrian refugees to Louisiana; and in last night’s debate, he said he “wanted to have a conversation” about the refugees being sent here. This latest of support for Syrian refugees reemphasizes why his support of President Obama and his foreign policies are so dangerous for Louisiana families. We need to make this very clear to the voters and make sure they know what is at stake on Saturday – it is a huge issue. I have attached new radio and TV (LINK BELOW) ads we are running regarding this issue and using John Bel’s own words. The more we can spread this message to the voters this week – we must get this message as far and wide as we can before election day.

Again, David knows all that you have done and is so grateful. But the events of the last 4 days highlight John Bel’s reckless support of terrible policies in a way that has not happened before – we need your help making sure everyone knows it. If you are able to send more support to help us add to our radio and TV buys it would be an incredible help at an important time.

Also, please share the T.V. ad link below with all of your contact as well as the article below.

Louisiana Democrat gubernatorial candidate John Bel Edwards says, if elected, he hopes to engage with the “federal authorities” and be partners in the effort to “accommodate” the Syrian “refugees who are fleeing from religious persecution.”
Edwards – who is running against GOP candidate Sen. David Vitter (R-LA) wrote on his Facebook page:
As governor, I will continue to be an active participant in the ongoing conversation with federal authorities so that we can be partners in the effort to both accommodate refugees who are fleeing from religious persecution and ensure that all our people are safe.
Edwards’ comments come as his opponent, Sen. David Vitter, calls for stopping the flow of refugees to Louisiana. Current Louisiana Gov. Bobby Jindal (R) has demanded answers from President Obama about the extent of background checks for Syrian refugees who have already begun to enter his state via New Orleans. In addition, Michigan Gov. Rick Snyder (R) has halted acceptance of Syrian refugees since the terrorist attacks in Paris on Friday.
After Jindal released his letter to Obama, Edwards’ campaign issued a statement saying he believes Louisiana should “pause the influx of refugees flowing into our state without more information.”
“I think the president has an obligation to provide answers before we move any further,” Edwards said, according to The Advocate. However, Edwards’ later Facebook post Sunday evening suggests he favors both sides of the issue.
In contrast, Vitter called Obama’s plan to increase the number of Syrian refugees “outrageous and irresponsible,” reports local NBC affiliate WDSU.
In September, Obama directed that the United States accept at least 10,000 Syrian refugees over the next 12 months with 180 cities participating in the resettlement plan.
The death toll in Paris from the terrorist attacks – for which ISIS claims responsibility – has risen to 132, with at least 352 people injured, some of them very seriously. Some reports indicate that several of the suspects remain at large.
Former New Orleans FBI chief and anti-terrorism expert Jim Bernazzani was interviewed by local Fox affiliate WVUE on whether terrorists coming into the country with the Syrian refugees are a legitimate concern.
“If I was in charge of ISIL, logistically I’d take advantage of this situation and put my people in, into the United States,” Bernazzani said. “Now with that said, the FBI is on top of this big time with our Joint Terrorism Task Force and we have what’s called a Terrorist Screening Center that these individuals will be run through.”
He added, however, that not every refugee entering the United States would face the same level of scrutiny.
“It’s going to be the 18- to 45-year-old male for the most part,” he said. “It’s a percentage game… it’s a percentage game.”