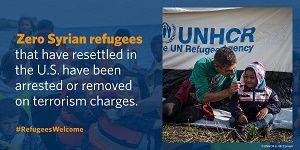 Panic in the streets?  Terrorists on your doorsteps?

How volatile is the issue after the Paris ISIS attacks?

In Louisiana, it appears, this issue alone might catapult US Senator David Vitter, into the governor's mansion after being down by 16 points, and now down by four.  The election is tomorrow.

The President’s number one priority -- and my focus every day -- is the safety and security of the American people. At the President’s direction, bolstered by a global coalition of 65 partners, we are taking the fight to ISIL -- working together to degrade and ultimately destroy the terrorist group.

The tragic event in Paris last week was a horrific attack on humanity, but we have always said that defeating an enemy as dangerous and determined as ISIL will be a long fight. Now, even as we intensify our efforts in coordination with our partners to take ISIL out, we cannot turn our backs on those most threatened by the terrorist group.

The refugees that have captivated so much attention in the wake of Friday’s attack are fleeing precisely the type of senseless slaughter that occurred in Paris. To slam the door in their faces -- to decide not to help when we know that we can help -- would be a betrayal of our values. It would be un-American.

That’s why, once it was concluded that we can do it safely, the President announced a plan to resettle at least 10,000 Syrian refugees in the United States next year. We remain steadfastly committed to that plan because it is consistent with our values and our national security.

We are going to do the right thing in the right way -- protecting the American people even as we provide refuge to some of the world’s most vulnerable people. Here’s how:

Focus on the Most Vulnerable

In the days since the attack on Paris some have taken the narrow view that protecting Americans from ISIL mandates that we turn our back on those most at risk to the terrorist group -- the men, women and children forced to flee their homes and families, their schools and communities. The Administration rejects the flawed view that we can’t ensure our own safety while also welcoming refugees desperately seeking their own safety. The truth is: America can and must do both.

‎Amy Pope is Deputy Assistant to the President for Homeland Security

More in this category: « Poll: Vitter riding typhoon with Syria Refugee issue, down by only 4 against Edwards Louisiana and America Will remember Bobby Jindal as a flop »
back to top