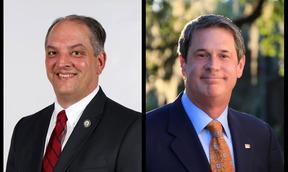 Call it the battle of the polls as the Louisiana Governor's race other other elections come down to the wire, tomorrow.

One poll, which had David Vitter down by 20 points shortly after the runoff began, then a few weeks later, it showed a 16 point difference, now shows a four-point Edwards advantage.  Today, the same pollster John Convillon of JMC Analytics, found Vitter had received a major boost due to an International gift coming Vitter’s way, by means of a terror attack in Paris, resulting in Vitter conducting a campaign against the Democrat on the issue of Syrian Refugees.  Those polls were conducted by John Convillon of JMC Analytics

A tracking poll, one by Verne Kennedy of MRI renderred different results.  After comparing the day to day  findings, Kennedy has not detected the type of dramatic decline that Convillion has found. Going into election day, depending upon the African American turnout, Kennedy opined that Edwards was winning anywhere from a 6 to 17 points.  Kennedy projected that if only 20% of blacks turnout, Edwards would win by 6, if 30 percent turnout, he would win by 17.

The second tracking and third poll was conducted by Greg Rigamer of GCR consulting. That tracking poll, did notice a strong dip for Edwards on Wednesday night, possibly as a result of the Syrian Paris crises, however, that dip straighten out, Thursday night.

The GCR poll also showed a significant difference in the vote for women vs. men, which  one assume is related to the ongoing prostitution scandal, Vitter has been suffering since 2007.  Also, Rigamer, after considering the anticipated support from the votes received via early voting has projected Edwards to win.

Here is the JMC Analytics poll, the Rigamer poll and the Verne Kennedy poll

In an online LIVE VIDEO Bayoubuzz Blab, Jim Brown, pollster Convillion and Bayoubuzz publisher Stephen Sabludowsky discussed the three polls in detail.  You can watch that discussion at the top of this page.

More in this category: « Louisiana and America Will remember Bobby Jindal as a flop Louisiana Governor’s Race: interview with Greg Rigamer, Part I »
back to top