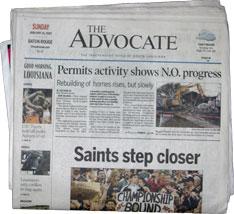 Monday October 1 will be the start of a new era in New Orleans as The Advocate will print a daily newspaper in New Orleans, thus providing the Times Picayune serious competition.

After years of being subjected to a daily newspaper owned by a New York based media conglomerate, the people of New Orleans will be able to enjoy a daily newspaper, published in the State of Louisiana.

While The Advocate is expanding from their long time base in Baton Rouge into New Orleans, the Times Picayune is contracting to a three day a week operation and their executives foolishly believe they will be able to retain loyalty among readers while seriously downsizing their print publication.  They will be in for a very rude awakening.

The proud residents of New Orleans were quite offended by the decision of Advance Publications and the Newhouse family to limit the Times Picayune print editions to Wednesday, Friday and Sunday.  The loyal readers of the newspaper did not take kindly to reports that New Orleans would become the largest city in the country without a daily newspaper.

There were rallies, on-line petitions, fundraisers and protests aimed at changing this decision. In addition, several delegations of prominent New Orleans business leaders, including Saints owner Tom Benson, traveled to New York to meet with the Newhouse family. Benson offered to buy the newspaper and keep it as a daily publication. Sadly, none of these efforts were successful as these request fell on deaf ears. The Newhouse family reiterated their decision not to sell and to print only three days a week.

In the process, Advance Publications fired 200 employees and used this same downsizing strategy on newspapers in Alabama, Michigan, Pennsylvania and New Jersey. They tried to fit New Orleans into their national strategy, yet the Crescent City follows the beat of a different drummer. This city is very unique and cherishes long held traditions, so it is unfortunate the out of state owners did not realize this fact.

The Advocate’s goal is to build up to 30,000 subscribers within six months. This is a very achievable target, especially since there is so much anger with the Times Picayune.  In fact, many people have already dropped their Times Picayune subscription and subscribed with The Advocate.

New Orleans is a newspaper kind of town with a citizenry that embraces traditions such as reading the Times Picayune with a cup of coffee each morning. Along with thousands of older residents who do not have computers, many younger people prefer holding a physical newspaper as opposed to surfing online websites.  These traditions can continue thanks to The Advocate.

While reading the new daily newspaper of New Orleans, readers will notice less bias and more objectivity within the news section. This balanced approach to news should be the goal of every newspaper. Unfortunately, it is not common practice at the Times Picayune, a publication known for its liberal bias.

Clearly many readers are tired of the bias regularly displayed on the pages of the Times Picayune. One radio show listener, “Charles,” highlighted a perfect example of the different approaches at the two newspapers.

Here are the comments he sent to the show via e-mail:

“I was delivered a complimentary copy of the Morning Advocate on Monday.  I read the T-P first, then started reading the Advocate.  I came across the same AP story in both publications.......The T-P head line, "Decades of federal dollars helped gas boom", repeats the Obama mantra:  "You didn't build that." The Advocate headline reads: "Shale a viable alternative." We will be starting our subscription to the Advocate Monday.  Bye-bye T-P.”

There are plenty of other people like “Charles” who will appreciate The Advocate’s objectivity. Let the newspaper wars begin and let’s hope the Louisiana home team wins. New Orleans deserves a daily newspaper and starting on October 1 the citizens will have one newspaper publisher who agrees with them.