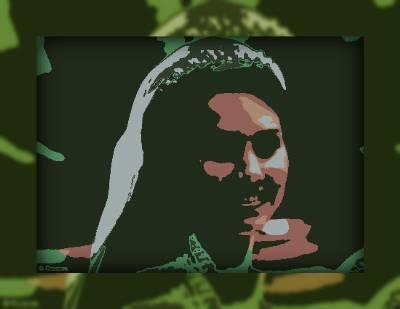 We see London, we see France, we see Kate Middleton’s....

The new "paparazzi" pics trickling out like a leaky hydrogen bomb from Prince William and Kate’s not-too-secret vacation in the south of France now show the front of her royal undercarriage, including a brunette boscage that will very likely have Kate bottomless’s young lady fans running off to their wigmakers for tiny hairpieces to restore what years of waxing have stripped away.

And although with her clothes either off or billowing around her waist she looks and acts a lot like the same old Waity Katie we grew up watching flash her teensy panties while sliding her mini-skirted torso in and out of limos as she caught up with her lover at all the best London watering holes, Princess William (that is Kate’s real "princess name") looked pretty darn royal in that borrowed tiara and expensive white wedding gown with sleeves at the wedding of the century.

In fact, the royal wedding did transform Waity-Katie from an unemployed courtesan into a more regal personage. That is why dumbfounding slip-ups like strutting around topless and bottomless on an open-air terrace in the South of France upsets courtiers. It makes everything slide back to the bad old teensy-panties limo days of being unroyal.

Actually, the only time a British royal should get publicly naked like Kate and her brother-in-law, Prince Harry did is at his or her coronation. In the olden days, monarchs stripped off their royal robes and stood modestly and soberly in their teensy panties before the highest church official in the land who then rubbed consecrated oil not exactly all over their breasts and bottom (like Prince William did with Kate), but certainly over their royal person–head, hands, and heart. The essence of the coronation is not really the wearing of the crown by the new monarch (although that certainly happens), but this anointment with oil on the monarch’s bare skin, now delicately and deferentially performed by the Archbishop of Canterbury. This still necessitates a stripping off of the royal robes, although nowadays, rather than being stark naked before church leaders, the monarch wears an "anointing gown"–a plain white linen shift that unfastens from behind.

But when this happens, there won’t be one single grainy photograph or film.

At least, there shouldn’t be, if all goes well.

The moment of anointing is the most sacred part of the coronation, and is traditionally hidden from public view by four Knights of the Garter, who hold a cloth over the monarch’s head. Smartphones will be confiscated and not returned.

Assuming that the atheists are wrong and God really does imbue His Spirit into the chosen royal wearing the teensy panties, well, who knows what those telephone pics might reveal?

Unlike the greasy suntan lotion Prince William was snapped rubbing onto Princess William’s (or perhaps now-nicknamed, Princess Kate Bottomless's) backside, the coronation’s consecrated oil is thought to be the medium through which the divine nature is transferred to the one being crowned. Indeed, the very word "messiah" comes from the Hebrew "mashiach" which mean, "anointed one." When Ptolemy II, third-century King of Egypt, directed that the Hebrew Bible be translated into Greek because of the many Jews living in Alexandria who had been "Hellenized" and spoke and read Greek, "mashiach" became translated as "Khristos," which then evolved into St. Paul’s interpretation of "Christ." The prophet Samuel was said to have anointed David with oil as the King of Israel, and the custom of pouring oil over the heads of kings is set forth in the Hebrew canons of Tanakh that date from 450 B.C.. In England, as many places elsewhere, power to the monarch on earth–God’s own chosen one–was thought to be transferred to the monarch from a higher place, and at a specific place and time–the coronation.

The oil represents the presence of the Holy Ghost, which is said to then descend to the chosen monarch (much as the Holy Ghost was said to descend and come to rest upon the body of Jesus at the time that John the Baptist baptized him with water).  It is the Holy Ghost--the very presence of God,  that is to guide the monarch on earth and inform all their decisions.

In English coronations, the consecrated oil is applied by a bishop with what is probably the oldest spoon in the realm--the Anointing Spoon. The spoon is small but incredibly beautiful, with four small pearls in the stem, and a bowl that is lavished with an arabesque scrollwork in the shape of a leopard's head.  Its bowl has an inside ridge bowl so that the bishop can easily dip two fingers into the oil with each rub.

Although unabashedly a Christian process, the English coronation refers specifically to the coronation of the Jewish King David's son, Solomon, who was anointed by "Zadok the priest and Nathan the prophet...and all the people rejoiced and cried, 'God save the King!  Long live the King!  May the King live forever!'"  There is no doubt that the British monarch is not only God's representative on earth, but that God, through the Holy Ghost or the Jewish Shekinah, is said to literally possess the monarch.

At least, that is how it is supposed to work, assuming that all goes well.

The tricky part is to keep this sacredness ever present in the mind of the subjects, who are supposed to elevate their king or queen beyond all other earthly beings.

And that is hard to do if one's mind and newspapers and favorite blog pages are full of bouncy, sexy images of the monarch's consort, who also participates in the solemnity of the coronation and is meant to be not only a team player but almost an annex of earthly majesty.

This elevation is why the blue-blooded are generally called "Their Royal Highnesses." But the bluest of the blue-blooded–the sovereign his or herself, like God--is a sun-like, and Son-of-God-like, majestic personage, and so is called, "Your Majesty."

If, like me, you pilgrimaged to Harahan and saw the Da Vinci Code, you know that Jesus supposedly married the Mary Madeleine and impregnated her. Then, after the crucifixion, Mary fled in a little rowboat across the Mediterranean Sea to the South of France where the royal bloodline of David (of which Jesus was said to be of) allegedly continued and is said to have entered into all the royal bloodlines of Europe, and where one of Jesus and Mary’s great-great-great-great-grandsons and his bouncy wife were photographed on a terrace like Adam and Eve, clueless as to the hidden presence of the evil serpent snapping pics of them while they frolicked, naked, pure, and unknowing.

So much happens in the South of France!

Sarah Ferguson, the disgraced Duchess of York, who was married to Prince William’s uncle, Prince Andrew, and can never seem to go away, related that she and her "financial advisor" lover, John Bryan, had similarly "booked our pink villa" in the South of France "under an assumed name.  We flew in on a chartered plane.  We were more than two miles off the road.  We were more than two miles off the road.  There was no public access to the villa; we were sheltered by woods and hills, halfway up a private gravel track that led to an isolated vineyard."  And similarly, cameras caught the Duchess sunbathing topless and her lover kissing her toes, or her foot, or her ankle, or, well, you get it.

Not only is there no privacy left in the world, but there has never been any privacy in the royal house of Windsor.

Royals who expect to be crowned and taken seriously need to keep their teensy panties on, until Garter Knights gather and the Bishop readies the spoon.

Princess Kate Middleton Bottomless probably understands this now even if she learned by being privately spoonfed.

More in this category: « Joint is jumping for Landrieu administration and New Orleans attorney Cantrell Pinsonat, Jindal revolution, Teepell and the skewed-poll claim »
back to top