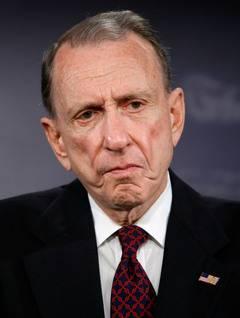 Arlen Specter, former Jewish and moderate Republican U.S. Senator from Pennsylvania is dead at 82.  He was one of a kind due to his religion, his party, his moderation and his votes.

Although he was Jewish, he was a Republican at a time when the Jewish bloc was primarily democrats. He firmly supported Israel yet he maintained relationships with the Assad rulers of Syria.

Given these above factors and the politics of today, some experts wonder if he or someone like him could survive politically in the U.S. Senate.  Take our poll and tell us what you think.  Feel free to forward it to others.

Here are some of the news stories that highlight his life.

Former senator Arlen Specter of Pennsylvania, an irascible moderate who served for three decades in a Senate increasingly dominated by conservatives and liberals, died Sunday. He was 82.

Specter died Sunday morning at his home in Philadelphia from complications of non-Hodgkins lymphoma, his son Shanin told the Associated Press.

Throughout 30 tumultuous years, Specter refused to toe either the Republican or Democratic party line. A Republican for nearly all his life, he nonetheless opposed Robert Bork's Supreme Court confirmation in 1987 and President Bill Clinton's impeachment in 1999.

He infuriated Democrats in 1991 with his prosecutorial questioning of Anita Hill, a law professor who accused Supreme Court nominee Clarence Thomas of sexual harassment. Specter's interrogation helped put Thomas on the high court.

Specter's career in Washington began with the election of Ronald Reagan and continued through 20 years of Republican administrations and 10 years under Democrats. He switched to the Democratic Party in 2009 to avoid a challenge from conservative Republican Pat Toomey, who nearly defeated him in 2004, but he lost a Democratic primary to Rep. Joe Sestak — who in turn lost to Toomey.

Specter rose to prominence in the 1960s as an aggressive Philadelphia prosecutor and as an assistant counsel to the Warren Commission, developing the single-bullet theory that posited just one bullet struck both President Kennedy and Texas Gov. John Connally — an assumption critical to the argument that presidential assassin Lee Harvey Oswald acted alone. The theory remains controversial and was the focus of Oliver Stone's 1991 movie "JFK."

In 1987, Specter helped thwart the Supreme Court nomination of former federal appeals Judge Robert H. Bork — earning him conservative enemies who still bitterly refer to such rejections as being "borked."

Specter, 82, died Sunday at his Philadelphia home following a long struggle with non-Hodgkins lymphoma, his family told The Associated Press.

He was first elected to the U.S. Senate from Pennsylvania in 1980, and his 30 years as a senator was a record in his state.

Specter was a combative moderate Republican with an interest in foreign affairs. Throughout the years he maintained contact with the Assad regime in Syria, even as it became more isolated, and offered himself as a broker for Syria-Israel peace talks.

Specter was especially embittered by a close 2004 primary race against Pat Toomey, a conservative Republican, feeling that the GOP establishment had not done enough to protect him.

"It's sort of an occupational hazard of mine to be stuck in the middle, and I will support my party when I can, but it's a matter of conscience that I may have to disagree," he said.

One of those disagreements came in 2009 when Specter was one of only three Republicans to vote for President Obama's stimulus — a vote that so infuriated his own party that polls showed Specter could not survive his next Republican primary. So, with support from Obama, he switched parties, only to be defeated in the Democratic primary.

A Child Of The Great Depression

Specter would later say that his own experiences as a child of the Great Depression were what led him to cast that stimulus vote, to prevent another depression.

Born in Kansas, Specter grew up in the only Jewish family in the farming community of Russell. During the period, his father went door-to-door selling cantaloupes.

In school, Specter made good grades, graduated from college with honors and got his law degree from Yale after serving in the Air Force during the Korean War. He also served as counsel to the Warren Commission investigating the assassination of President Kennedy.

He was a young man on the move when in 1965 he was elected district attorney of Philadelphia, amassing a record as a crusading prosecutor over two terms. In 1981, after losing four races for other offices, he was elected to the U.S. Senate seat he would hold for the next 30 years.

There, Specter was admired for his mastery of public policy matters large and small; respected for his hard work, his intellectual acumen and his sheer doggedness.

But he was also notorious for his sharp elbows and porcupine-prickly personality. In a 2005 interview, we had this exchange.

Totenberg: "You know they call you Snarlin' Arlen?"

Specter: "It's a bad rap. It all came about because some people call me Darlin' Arlen, and they were trying to look for something that rhymed with Arlen and darlin' which was nasty. It's a bad rap."

If not the most charming senator, Specter was among the toughest. In his 70s, he battled brain cancer, then non-Hodgkins lymphoma. He looked frail, small and bald. But he refused to give up, maintaining a grueling Senate schedule while he underwent chemotherapy. Even as his exhaustion was palpable, he was up every morning at 6, playing squash, giving no quarter to the disease, just as he gave no quarter to critics or political opponents.

"My definition of winning at squash is playing and surviving," he said, "and I've never lost a match."

More in this category: « Louisiana GOP Chairman Villere not laughing about Biden's debate performance Louisiana-based Bayoubuzz.com Advertising Rates and Opportunities »
back to top