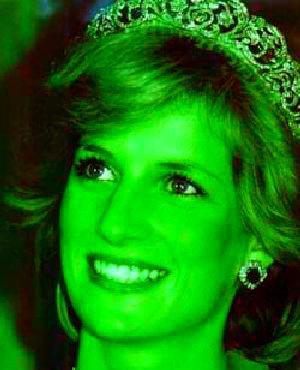 This is why, U.S.A. Today declares, William is "furious" with whomever snapped his wife, Kate Middleton, topless, bottomless, and, it is rumored, in various acts of “breathless” intimacy performed in the bright sunshine on an open terrace of a home clearly visible from a public roadway.

William is not only enraged with the snapper, but is determined to hunt him (or her) down, and bring them to justice in the courts.

"[T]he topless-Kate uproar is the perfect storm of William's fears that his wife would be victimized by the paparazzi. He has not forgotten how his mother, Princess Diana, was hounded during her time as Princess of Wales, and he continues to blame them for her death in a 1997 Paris car crash involving a drunken driver," U.S.A. Today claims.

And William’s "furious" because Kate Middleton’s "privacy" was invaded, says Dickie Arbiter, a former Buckingham Palace press secretary-turned-royal commentator recently commented. "For something like this to happen almost 15 years to the day (after Diana's death) has made him incredibly angry, so he's using the law, which is there (in France) to protect individuals, not just princes."

And should not the truth be more important than little fairy stories, even fairy stories about fairy-tale like marriages ending up in a not-so fairy-tale accident and death?

Much ado is made about how Prince William and Kate Middleton both graduated from college–Prince Charles and his younger brother, Prince Edward, and Prince Andrew’s daughters Princesses Beatrice and Eugenie are the only other immediate "royal highnesses" in direct line to the throne to have done so. But colleges don’t normally give courses in common sense. Nor do four years of sweating through weighty subjects like art history and world geography necessarily supply the analytical skills necessary to examine something as mysterious and complicated as the untimely death of Princess Diana following the car crash in the Paris Alma Tunnel that killed her wealthy lover, Dodi Fayed, and their professional driver, Henri Paul, and very nearly decapitated their bodyguard, Trevor Rees-Jones.

Especially when seeking the truth and finding it can bring the whole house of royal cards, from Jack to King, a-tumbling down.

For Prince William, seeking the truth is risky. He can have his royal allowance and perhaps even his titles taken away.

My guess is that he will do what other royals before him, including his great aunt, Princess Margaret, his uncle Prince Andrew, and his great-great-uncle, the Duke of Windsor, have done–he will take the allowance, keep his trap shut, and keep blaming the press for everything bad that befalls him and his careless bride.

But he still has a choice.

If Prince William cares to learn the truth, the truth is out there (if not all the answers). And some of the findings of the third and final inquest into how his mother died are sitting right on the internet, where anyone can go to http://webarchive.nationalarchives.gov.uk/20090607230252/http:/www.scottbaker-inquests.gov.uk/, and read the testimony given to the Queen’s own coroner. Read about how the accident most likely occurred here: http://webarchive.nationalarchives.gov.uk/20090607230252/http://www.scottbaker-inquests.gov.uk/hearing_transcripts/121107am.htm.

The information to be gleaned from these files is discomfiting at best. For one thing, Princess Diana’s car crash was not caused by "the paparazzi." In fact, the paparazzi had followed a "bait" car designed to draw them away from Diana’s Mercedes and head in an opposite direction. They were not following the doomed Mercedes as it entered the tunnel. The driver was certainly "speeding," at about 65 m.p.h., which is nevertheless the normal driving speed in practice in Paris on its various beltways and "sliproads" (entrance ramps), even through the Alma Tunnel. And if the driver did have several alcoholic drinks, well, I hate to say this, but this is also fairly normal practice in Paris. Most Parisians likely drive semi-officially with a drink or two or three in their systems, and there are relatively few accidents caused this way. Plus, the relatively short distance between where Diana was leaving and where she was heading would vastly multiply her odds of not having any accident at all.

No. What the coroner’s inquest conclusively shows is that the Mercedes crashed into the 13th square-edged pillar of the Alma Tunnel when it was twice "touched" by a white Fiat Uno. From the shattered tail light glass found on the tunnel roadway to the definitive white paint found on both the front and side of the Mercedes, experts concluded that the Fiat must have crossed the center dividing line and pulled in front of the Mercedes and then slowed its speed so that the Mercedes hit the Fiat’s rear end. This impact broke the Fiat’s tail lights, scattering the red plastic tail light plastic across the roadway, and left tell-tale white paint on the Mercedes’ front. The Fiat then likely moved to the Mercedes’ passenger side, and again "touched" the Mercedes, this time on its side. This left more white paint behind on the Mercedes’ right side, and also damaged its running lights and side-mirror. This second "touch" also meant that, when Diana’s driver tried to re-correct and pull away from the Mercedes, he over-steered to the left and crashed into the square-edged 13th pillar.

There is no doubt that the Fiat’s driver knew, with great certainty, that his car had impacted the Mercedes twice. Experts concurred that the impact on the Mercedes by the Fiat was likely "forceful."

Because nobody inside the Mercedes was wearing a seat belt, the injuries from the impact and sudden deceleration of the car were great.

The damaged white Fiat Uno then pulled away and drove off effortlessly into the Paris night, its driver and even the Fiat itself never to be found.

Skid marks at the scene show that the Fiat’s driver never once hit his own brakes, and drove just fast enough so as not to become "entangled" in the accident.

The Mercedes, its front crushed, then swung out into the roadway as it bounced back from the impact with the pillar. Dodie died almost instantly from a completely severed aorta artery, as did the driver, Henri Paul. Trevor Rees-Jones’s face was literally impaled upon the shattered windshield and wreckage, with virtually every bone in it broken, but he was still alive.

And Diana was still alive as well.

Then, everyone supposedly rescuing her took their time, and she died, hours later, in hospital.

Well-paid paparazzi and reporters would keep us up-to-date via tabloids at the grocery store. We’d flip back and forth between Diana’s latest lover and our weekly crossword puzzle.

But it did not happen that way.

The paparazzi, hearing of the brutal accident, sped away from Dodi’s swank apartment, where they had all been awaiting the couple’s arrival, to the tunnel. Some of them did take photos. Some paparazzi were tough, and would photograph anything. Some, before they were shooting celebrities, had made their reputations fighting in and photographing the Balkan wars. And some paparazzi broke down, sobbing, when they heard that their princess had died. Some cry even now, just thinking about it. Some never picked up a camera again.

But did they kill Princess Diana? The answer, for anyone able to read and assimilate the facts, must clearly be "no." Unless they were the driver of the white Fiat Uno. Or unless they intentionally delayed Diana’s speedy delivery to the hospital. Some persons did indeed do this, but it appears that they were not snappers or yappers.

Were the paparazzi blamed and arrested? Yes, they were. French authorities interrogated them, intimidated them, terrorized some of them, and all their films and video were confiscated. But in the end, they were convicted only as a class who created a frenzy of interest.

Prince William now flies helicopters, which takes some skill, and he is married, which usually marks a progression from child to youth to man. But when we look at him, it is hard to see the grown man that Princess Diana must have imagined and prayed that he would become. When we look at him, we see an often dour-faced man, heading into childless middle-age, who is sleep-walking through life. We see a man lashing out at ghosts.

We see William, Prince of England, haunted by fears. Like Hamlet, Shakespeare’s literary Prince of Denmark who was urged by his murdered father’s ghost to avenge the guilty uncle who then married Hamlet’s mother and seized the kingly crown for himself, William must wrestle with his dead mother’s ghost and, more difficultly, with the forever luminous and spell-binding image of his mother as eternally alive, eternally beautiful, eternally holy, while his father has handed the queenship rightfully Diana’s over to Camilla, his bejeweled and bejowled adulterous lover. As was the case with Hamlet’s mother Gertrude, remarriage seems not to make things right, but only more curious. The House of Windsor is a troubled place where one cannot look too closely even at one’s own kinfolk, let alone the courtiers who micro-manage the royals’ lives. William is therefore encouraged to avenge his mother’s death through lashing away at the paparazzi.

Who is guilty? That is hard to say. Who is not guilty? Those who took the photos, trying to record a life in motion, a life in being, a life, a woman much alive, and on her way to a new and different destiny. That is what the pictures say.