Is Romney or Obama better for US women? Take the poll 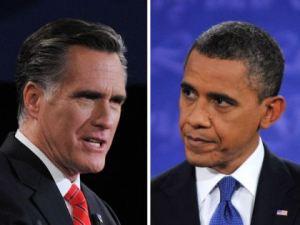 Which Presidential candidate would be the best to advocate issues that benefit women in the United States?

Romney has attempted to focus upon women and jobs noting that a bad economy under President Obama has especially hurt American women and despite his "binder full of women" comment, he did actually work hard and succeed in finding qualified women to work for his administration in Massachusettes when he was governor.  His gaffe may be a hit for democrats but his administration led the country in women hirings.

Obama has been able to capture many of the themes of the traditional "women-issue" from abortion to contraceptives to social issues championed by groups such as NOW and Planned Parenthood.  However, his once-dominant lead with women has dropped significantly over the past few weeks since the first debate.

So, who is the candidate that will champion the women issues?

Here are recent articles.  Also, make sure you vote for your choice on this issue in our poll, below.  Also, if you want to comment on this story, sign in using your Facebook connect and let your voice be heard.

STORY HIGHLIGHTS Writers: Romney's story about finding qualified women shows old ideas on working women Women are ahead in college degrees, many fields. Why not on Romney's radar? They say his view of 'workplace flexibility' is for women to get home to "second shift" Writers: Comments show little understanding, serious thought on workplace equity for women

Editor's note: Kathleen Dolan is a professor of political science at the University of Wisconsin, Milwaukee. She is the author of "Voting for Women: How the Public Evaluates Women Candidates" (Westview Press 2004). Jennifer L. Lawless is associate professor of government and director of the Women & Politics Institute at American University. She is the author of "Becoming a Candidate: Political Ambition and the Decision to Run for Office" (Cambridge University Press 2012).

MANCHESTER, New Hampshire (Reuters) - President Barack Obama hammered Republican Mitt Romney over women's rights and foreshadowed arguments he will make in an upcoming debate on foreign policy during a campaign stop on Thursday in the battleground state of New Hampshire. The Democratic incumbent has rebounded since his sharper, more energetic performance in Monday night's debate helped make up for his heavily criticized, lackluster appearance in their first encounter, which gave Romney a boost in public opinion polls. ...

Both campaigns are wooing women after the debate , including the Mitt Romney campaign launching a bus tour in Iowa with women who worked with the Republican presidential nominee. But at the debate, Romney said the following: "In the last four years, women have lost 580,000 jobs.”

There are several ways to look at this. But the bottom line is Romney’s count is incorrect.

According to the Bureau of Labor Statistics, the number of payroll jobs held by women -- from February 2009, the first full month President Barack Obama was in office -- has declined by 82,000 jobs.

Even if calculated from January, the number is 283,000 jobs, not 580,000. Romney was likely using an outdated figure based on data from March when the GOP primary was wrapping up. Calculating from January 2009 to March 2012, the number is about 583,000 jobs lost. But, of course, January wasn't

Mitt Romney’s second-in-command when he was governor of Massachusetts and a coalition of women's groups rallied Wednesday behind the Republican presidential nominee in the face of a rapidly expanding Internet phenomenon poking fun at his "binders full of women."

The supporters said Romney, indeed, asked for and received binders with names of potential female candidates for high-level posts -- backing up his claim in Tuesday night's debate that as governor he had reached out to women's groups because he was dissatisfied with the mostly male applicants for jobs in his administration.

Romney's anecdote, in which he recalled receiving "binders full of women," was part of the Republican's efforts to appeal to undecided female voters, a voting bloc that could swing the election.

President Obama once held a double-digit lead with the group. But a recent Gallup survey shows the president just 6 percentage points ahead of Romney among likely women