Donald Trump has posted on twitter with a link to his Facebook page a image serving as his press release challenging President Barack Obama to provide to the American people through universities and colleges his birth records, college records passports and more.  He  also made a video of his statement. 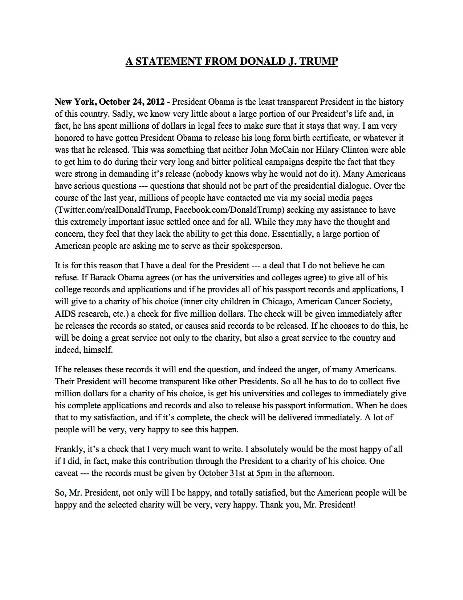 "President Obama is the least transparent president in the history of this country, There's never been anything like it. We know very little about our president.

"I have a deal, a deal I don't believe he can refuse. And I hope he doesn't."

"When he does that to my satisfaction, if's is complete, this check is delivered immediately," Trump said. "He'll be doing a great service for the country if he does this."

"The records must be given by Oct. 31 at 5 o'clock in the afternoon. Not only will I be happy -- and by the way, totally satisfied -- but the American people will be happy. And you know what? Those charities will be very, very happy."

TELL US WHAT YOU THINK...TELL US BELOW...

More in this category: « Kate Middleton and William on Dynasty ’s naked balcony, common but not pregnant Will Queen Elizabeth skip Charles to crown William and Kate Middleton due to Camilla? »
back to top