Reagan Flipped off by Obama’s gay guests at White House 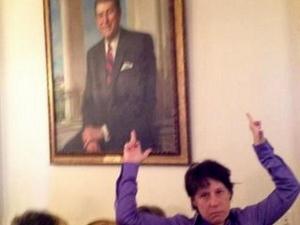 Last week, President Obama hosted the first ever gay pride reception at the White House. Among the guests were two gay rights activists from Philadelphia who used the opportunity to “shoot the bird” at the portrait of former President Ronald Reagan. Pictures of Matthew “Matty” Hart, national director of public engagement at Solutions for Progress, and photographer Zoe Strauss making this obscene gesture are now circulating across the Internet.

What an embarrassment for the gay rights community, the city of Philadelphia and President Obama. It is sad that President Obama’s guests would use a White House invitation to express their anger at Ronald Reagan.

This gesture did not meet the approval of at least one member of the Philadelphia delegation. Mark Segal, publisher of a gay newspaper, said that “It is not a gesture that I would use in the White House when representing our city and our community.”

Their actions defiled the White House, which represents all of the American people. It is also extremely distasteful to “flip off” the 40th President of this country who was elected to office in a landslide and re-elected with an even bigger majority, winning 49 states.

Their juvenile actions show the problem with many extremists in the gay rights movement. They want to blame conservative politicians like Ronald Reagan for the country’s overwhelming opposition to their radical agenda. It is not Ronald Reagan’s fault that in every state that has held an election, gay marriage has failed. Gay marriage is now legal in eight states, but in each case, it was approved by politicians, not the people.

In the future, President Obama should do a better job of screening the guest list for White House receptions. He should not allow “the people’s house” to be used by radical activists to disrespect a popular former President of the nation. In fact, Reagan is more than popular. A recent Gallup poll showed that Reagan was the most admired President in our nation’s history.  So these activists not only showed incredibly poor taste, but they are totally out of step with the American people

Strauss was not content to give Reagan the middle finger salute. She also used the Obama reception as an opportunity to “make out” with her partner LB “under a portrait of Reagan at the White House.” Strauss described the experience as “amazing.” Hart was also impressed with the event and depicted the reception as “fantastic,” noting that the group of activists was “honored guests of Obama.” Too bad Hart, Strauss and other “honored guests” did not act in an honorable manner.

Along with the obscene gestures and make out sessions, guests were treated to dancing and musical entertainment from the Marine Corps band. Guests were also entertained by an unusual wedding proposal between a woman and a “female-to-male transgendered person.”

How did the White House staff react to such shenanigans at 1600 Pennsylvania Avenue? According to Hart, the staff was “giddy” at the proceedings. As such, the Obama staffers must have been overjoyed at the obscene gestures, inappropriate kissing and the bizarre marriage proposal.

It certainly was amazing that our President considers such radical activists as appropriate White House guests. Whatever standard of decency that was once exhibited at the White House is now ancient history.  This is the United States of America 2012 edition.

More in this category: « Obamacare, Fast and Furious, and Immigration: political games continue Jindal on Romney campaign audition road in Utah as Educators sue »
back to top