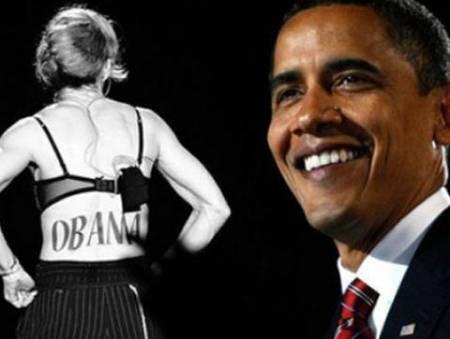 Last Saturday night in New Orleans, pop superstar Madonna entertained her audience by performing her many hits. It was undoubtedly a stellar performance for Madonna has been a major star for decades. Unfortunately, in the midst of the concert, she decided to engage in political talk with her audience.

In recent months, Madonna has been very vocal about her support for Barack Obama. In fact, she has written the President’s name on various parts of her body and is not be bashful about showing it to her fans. Not surprisingly, she promises to strip completely naked if the President wins re-election.

This type of strip politics may play well in New York or London, but it was not very popular at the New Orleans Arena.  After telling the crowd, “I don't care who you vote for as long as you vote for Obama” she was greeted with a chorus of boos and some of the audience actually left the arena.

This negative response must have surprised the singer, who is usually praised for her liberal political views. She is certainly not alone in the entertainment community. Last week, the current Queen of pop music Katy Perry wore a dress emblazoned with Barack Obama lettering. The star of the successful musical group Black Eyed Peas, Will-I-am, regularly performs at Obama fundraisers. These music stars are joined by many of the top movie stars in supporting the re-election of President Obama.

In the past four years, the President has attended numerous Hollywood fundraisers and has raised millions of dollars from this community alone. Nonetheless, these stars do pay a price for their political involvement. Madonna and her Hollywood friends lose credibility every time they venture into politics and they alienate about half of the country in the process.

A must better idea would be for Madonna, Katy Perry and the other Obama lovers to just shut up and sing. At the New Orleans Arena, patrons paid good money to hear Madonna sing, not engage in electioneering for Barack Obama. According to one upset fan, Nick Nunez, Madonna “shouldn't push her political agenda when we're paying money to hear her music."

Madonna has a responsibility to deliver what her fans paid to see, not surprise them by encouraging a vote for Obama, who, by the way, is not very popular in the state of Louisiana.

After being subjected to all of this activism, it might be time for the millions of conservatives in this country to boycott these outspoken liberal artists and hit them where it hurts, in the bank account.

Without conservative fans, Madonna would not be as wealthy, and she would not sell as many seats at her concert. If they are hurt financially, maybe Madonna and her ill-informed friends would think twice about lecturing their fellow Americans about politics, not exactly their area of expertise.

WATCH VIDEO BELOW...TELL US WHAT YOU THINK..AGREE OR DISAGREE WITH COLUMN?

More in this category: « Hurricane Sandy Poll: Should US elections be postponed? Curious Circumstances of Brees, Vick and Manning as New Orleans Saints deflate »
back to top