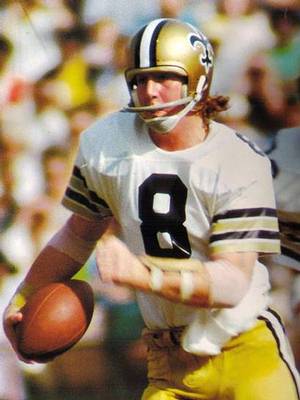 Are the Saints caught in one of those rare atmospheric conundrums that a trained gridologist might term a "curious confluence of contrasting circumstances?"

You might not comprehend the flowery appellation, but you certainly would recall the years when it seems the team excelled on one side of the ball while losing the game from the other side. That is obviously what is happening this season as Drew Brees' offense is still scoring adequate points, currently ranking eighth in the NFL, while the defense is setting records for futility.

It does not matter how many points you score if the other team is scoring more, and after seven games the Saints are scoring 27 while the defense is allowing 31. Believe it or not, the Titans and Bills are worse, but the fates in Buffalo and Nashville have nothing to do with the major funk the Who Dats are suffering through because of their team's  inability to reverse that trend. But we have seen it before, haven't we?

Archie Manning, running the NFL's best offense with a suspect defense, while Jim Mora's teams boasted the NFL's best defense and a suspicious offense. Remember the weapons that Archie had at his disposal, with Chuck Muncie, Wes Chandler and Henry Childs? They were one of the best offenses in the NFL in the late Seventies, topping out as the fourth best in the league in 1979. Meanwhile, the defense had its problems keeping the other team out of the end zone, ranking consistently in the lower half of the league.

Flash forward to more recent times when Mora's defenses ranked in the top handful from 1987 to 1992 and No. 1 in 1991 and 1992. The offense in those years wasn't as bad as critics believed, ranking as high as No. 2 in the team's breakout season of 1987 and in the top ten in 1991 and 1992. Bobby Hebert was effective within the run-oriented system the Saints ran then with Dalton Hilliard and Rueben Mayes, although he did not have the quality of receivers that Brees enjoys.

But looking at Mora's defense gives you get an idea of what is lacking in Steve Spagnuolo's defense. No other team put four linebackers in the Pro Bowl the same year, but Rickey Jackson, Sam Mills, Vaughan Johnson and Pat Swilling were so honored in 1992, and between them went to 18 Pro Bowls. They were all playmakers who could make a big play at a critical time, something the current team does not have. Name one defensive player since Darren Sharper who can be counted on to make a big play at a critical juncture. You have to think about it and you still can't come up with one.

Having said all that, this Sunday's game will show exactly how bad the Saints defense is. The Eagles' Michael Vick has been struggling and is on the verge of making reservations elsewhere next season, although Coach Andy Reid proclaimed he is sticking with him for now. Vick surely has watched the Saints game video and sees the opportunity at redemption this weekend. And unless Brees can stay ahead of his defense, the "curious confluence of contrasting circumstances" will sink the Saints further down the standings.

WATCH THE VIDEO OF ARCHIE MANNING, BELOW.

More in this category: « Madonna booed in New Orleans over endorsement of Obama is reject Hollywood liberalism Louisiana Organizations: Lagasse Foundation, St. Paul's, Hurricane Sandy, Entergy and Our Teachers »
back to top