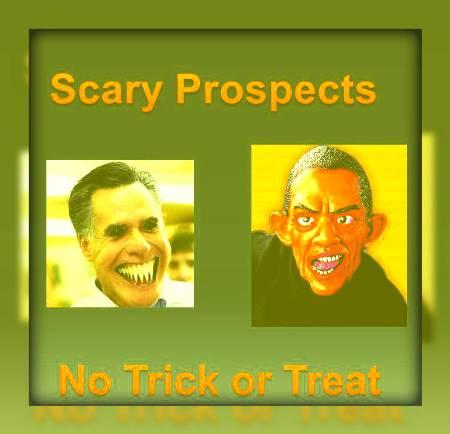 Greetings, welcome to the House of Schlock.
With U.S. elections and Louisiana elections less than a week away. That's scary.  So, what's going on this Halloween Day?

The answer is nerve-racking politics for at least one half of our country's populace.  The country is split into two camps, those voting for the Ghoul Obama and those voting for the Ghost Romney.    While the election result in Louisiana is as clear as a full moon night in October, nationally, it's a fright. And, that's no Trick and no Treat. Just spooky.

Here is a sample of what is occuring locally and nationally.

(up 1 from yesterday; no change from a week ago)

STATE OF THE ECONOMY#

Asked of likely voters: "Do you think the economy is getting better, getting worse or staying about the same?"

Jobs and the economy: Romney +6

Asked of likely voters: "Which candidate do you think would do more to help middle class Americans?"

Direction of country average based on the three most recently reported nationwide polls.

* Average based on seven most recently released nationwide polls:

Below is posted on the Louisiana Democratic Party website dealing with a timely subject--disaster.

Two months after Hurricane Isaac's flooding devastated parts of southeast Louisiana, Americans have been presented with fresh evidence of the essential role the federal government plays in disaster recovery in the aftermath of Hurricane Sandy's impact in the the northeast.

By all accounts, the federal government's response to both Isaac and Sandy -- delivered primarily through the Federal Emergency Management Agency (FEMA) -- has been exemplary, in stark contrast to the shocking ineptitude ofFEMA's response to Hurricane Katrina in 2005. President Obama's selection of Craig Fugate, former disaster recovery head in Florida, has transformed the agency from a hotbed of cronyism into the effective disaster response agency that Americans want and need it to be.

That would all change if Mitt Romney and Paul Ryan win next Tuesday's election.

During the Republican presidential primaries, Romney declared that, if elected President, he'd shut down FEMA and transfer disaster recovery responsibilities to the states and the private sector. Here's the transcript of what Romney told Republican voters.

Romney has no concept of the impact of disasters on the lives of the non-wealthy. As Governor of Massachusetts, Romney vetoed a flood prevention bill that would have affected parts of the commonwealth that later flooded. Romney's veto made the flooding after a 2004 storm worse - and he turned to the federal government to help with the recovery effort.

Paul Ryan was part of the House Republican leadership effort to deny disaster recovery funding for victims of tornadoes in Joplin, Missouri, unless cuts were made in other programs.

In the wake of Hurricane Sandy, Romney has refused to either back or abandon his earlier statements on the federal role in disaster recovery.

Like his approach to disaster recovery, we are on our own to figure out what his true position is on the matter. We only have his words to go by. FEMA's transformation under President Obama's leadership shows one clear path forward. Can we risk waiting for Mr. Romney to make up his mind?

“I believe that FEMA plays a key role in working with states and localities to prepare for and respond to natural disasters,” Romney said in a statement. “As president, I will ensure FEMA has the funding it needs to fulfill its mission, while directing maximum resources to the first responders who work tirelessly to help those in need, because states and localities are in the best position to get aid to the individuals and communities affected by natural disasters.”

Don't forget, tomorrow November 1, Politics with a Punch, election edition, gotta be there

The Republican Party of Louisiana held a tribute on Monday to Louisiana Speaker of the House Chuck Kleckley, presenting him with the “Red Elephant” award for his leadership in enacting bold reforms during the 2012 legislative session.

"We are proud to have Republican legislative leaders like Speaker Kleckley who are willing to do what is right even when opponents use bullying tactics," Villere said. "It is clear that Speaker Kleckley is committed to representing his own constituents, regardless of pressure from outside groups."

“With the 2013 legislative session right around the corner, we are excited and committed to continue to work with the Speaker to advance conservative reform in Louisiana,"  Villere said.

Their responses are in, or not, and our state legislators have spoken: they will leave solving the current health care crisis to the governor rather than take responsibility for it themselves. A solid majority of the House, 66, and a supermajority of the Senate, 30, did not sign the petition for a special session to deal with the sudden loss of federal Medicaid dollars and the governor’s plan to close a mental health hospital and to gut public hospitals, turning some into glorified out-patient clinics.

Most of the non-signers were Republicans, but a fair number were Democrats. By their inaction, some are saying they support Gov. Bobby Jindal’s plan for this massive, historic and rapid change in public health care. Others have misgivings but do not know what else to do. Their overriding fear would be to spend $80,000 a day in special session and to not come up with a better solution. That would only serve to shift the growing public anger over the hospital cuts and layoffs from Jindal to themselves.

They have a point. If the main obstacle to the special session was the lack of a consensus plan, the main obstacle to a consensus plan was the governor’s flat opposition to raising taxes or repealing exemptions. (While he cannot veto the temporary suspension of a tax exemption, most suspensions would still require a two-thirds vote.) For the governor to limit legislators’ options so much gives them all the more reason to let him deal with the problem himself.

So, his administration and LSU health care officials move ahead, in fire-drill fashion, to try to arrange partnerships with community and private hospitals or to explore the possible sale or lease of some of the stronger state hospitals, particularly in north Louisiana. The downsizing of public hospitals creates a further budget hole in the graduate medical education program for training new doctors, as the LSU Board of Supervisors seemed surprised to learn last week.

The governor and many legislators have long recognized that the state network of public hospitals is unsustainable within the federal Medicaid system. The long-term plan, which Congress abruptly shortened, was to move gradually toward more public-private partnerships, like the one still being developed in Baton Rouge. But that has taken three years and millions of dollars of new construction, by the state and Our Lady of the Lake. The time and money are not available to do the same in other south Louisiana cities.

There is much interest and willingness on the part of private and community hospitals to help, but the big missing piece is adequate funding to take over the care of the uninsured, who make too much money to be on Medicaid and not enough to afford private insurance. Federal payments to hospitals that care for a disproportionate share of low-income patients is being reduced under the Affordable Care Act, which would cover many of the uninsured through the expansion of Medicaid.

But that is another option Gov. Jindal has taken off the table by declaring the state would not participate in the Medicaid expansion. Critics, even some supporters, say he’s dead wrong on this, especially with the feds picking up the whole tab for three years, after which the state’s share gradually rises to 10 percent.

It galls supporters of the special session even more that one man would block what they see as a big part of the solution to the current health care crisis. Yet Jindal’s role in setting the future course of public health care in this state is small compared to that of the prime mover, the next President of the United States.

With the Medicaid expansion not taking place until 2014, the governor’s opposition is a political statement, like with other Republican governors, in the national debate over health care. That was supposed to be a major issue in the presidential election, but it hasn’t been.

Nevertheless, the outcome of the election largely will determine what Jindal will or can do with health care in general and the Medicaid expansion especially. If Mitt Romney wins, the new president might decide to keep the Medicaid expansion but to give the states more flexibility to run their systems, which Jindal wants. If Barack Obama wins, this governor, doing the math, might not have much choice. That’s one more reason the Legislature is leaving it up to him.

A demonstration was held at Congressman Bill Cassidy's Baton Rouge office (5555 Hilton Ave.) at noon today to protest his role in Louisiana's current Medicaid crisis.  According to the organizers the focus is on "his record of misleading the voters on the health care issue. "

This event is being held by the organizations Grassroots Baton Rouge Democrats and the Louisiana Movement.

— October 31, 2012) At a time when Louisiana's high poverty rate is rising, lawmakers should expand the state's version of the Earned Income Tax Credit (EITC) to support low-income working families with children. A new Louisiana Budget Project report explains the importance of Louisiana’s EITC and recommends doubling its value.

The EITC encourages and rewards work and helps ease the impact of various taxes and fees on low-income families. "The EITC gives low-income working families a much-needed boost, making it the most effective anti-poverty tool for children," said Jan Moller, director of the Louisiana Budget Project. “Children in families who receive EITC-like income boosts do better in school, and work and earn more as adults.”

Louisiana has the nation’s third-highest poverty rate, and more than one in four of the state’s children live below the poverty line. "For Louisiana to thrive, families must succeed. Combating poverty by increasing the state EITC is a good investment in our state’s economic future,” Moller said.

The credit currently puts $45.5 million per year back into the pockets of hard-working Louisiana families, helping them afford basic needs such as food and housing. Legislators could pay for the expanded tax credit by eliminating tax breaks that are outdated, inefficient or no longer serve a purpose.

"The state's earned-income credit has been rigorously evaluated, unlike many other credits, and the benefits for Louisiana families and children are proven," Moller said.

For a copy of the full report and more information on LBP, visit www.labudget.org and read "Louisiana’s Earned Income Tax Credit: A Smart Investment in Working Families and Children."

More in this category: « Louisiana Organizations: Lagasse Foundation, St. Paul's, Hurricane Sandy, Entergy and Our Teachers Romney or Obama, US elections voting in Louisiana »
back to top