Kate Middleton has the Fabriah best hair, but Camilla has Queen Elizabeth's tiaras 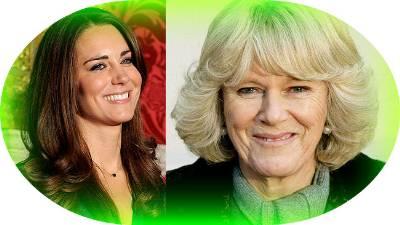 Kate Middleton has just been "voted" as having the best hair in the world.

Fabriah, a hair care product retailer I don’t know much about, says it took a poll and proved it.

Since we now live in a world where we can vote for people we don’t know and have never met on and off islands, in and out of houses, and into recording contracts or not, why should I be surprised? I mean, who’s the competition–Honey Boo Boo?

Here is why we should not care so deeply about Kate Middleton’s hair: For royals, it is not how much hair you have, but what you are able to put into it.

Kate doesn’t appear to have a great, walloping, wonking tiara yet.

And there is a good reason why not.

Her father-in-law Charles, Prince of Wales, wants to be the next king. And he wants his second wife, Camilla (the wife who’s still alive) to be his princess consort...queen consort...whatever his subjects can tolerate, as long as it includes him being king.

Not his son Prince William, and not William’s wife, Kate.

Charles wants to be the next King of England, and he wants Camilla beside him.

To make this happen, he has taken the trouble to elevate her–to raise her high above her own original social station, and above our social stations (if you look at it the way British people do). One way to do this is to plonk a great, big walloping wonking tiara on her head, and then photograph her in it. Preferably, with all her clothes on.

And for good measure, the Queen and her son have added in a pile of very nice diamond necklaces, often several layers thick, so you won’t miss them.

Can you see Camilla? She’s the very sparkly one.

That is why Kate and the press she courts so assiduously are making a big deal out of her, oh, what did they write in the papers? "Cascading, luxurious brunette locks, timeless, classic, so natural" something like that. Yeah, yeah, yeah, yeah, yeah.

That's a lot of verbage for hair that is, basically, brown and very long.

Listen, Diana, the late Princess of Wales, never did have even half of Kate Middleton’s hair, and still, well, Diana's hair was the least of her best features. And in any event, her hair was beautiful, stylish, and amazingly short for someone who had to constantly be pinning tiaras to it.

But at least Diana had tiaras to pin into her hair.  The tiara is a sign that one has truly become royal, whether we like them or not.

See, the way royalty works is that we, The Globe-reading public, don't get to vote Camilla or anyone in or out of the Palace.  Only the Queen gets to do that.

Her Majesty voted Diana onto the island, and then she voted her off.  She probably was concerned when Charles insisted upon marrying Camilla, but the Queen said nothing at the time, so everyone assumed that silence was golden and that the Queen had voted her on. But the only way a lady knows for sure if the Queen really, really likes her is if Her Majesty lends her a tiara.

Kate did get to wear a nice, smallish tiara for her Royal Wedding–the scroll Cartier tiara. It’s a loaner from her grandmother-in-law, Her Majesty Queen Elizabeth II, who received it from her own mother. Practically all royal tiaras are loaners. The signals folks need to pay attention to are all in the shiny headgear, and there is no doubt whatsoever that Camilla, Duchess of Cornwall’s headgear is bigger (and sometimes weirder) than Kate’s.

But with British Royalty, "weird" means "quirky," and "bigger" is good.

Bigger lets you know where you stand.

Right now, Kate isn’t wearing anything big except her smile.

Kate has just itty bitty stuff that we can all buy (at least, if our rent is paid up). Usually.

This should tell you something.

Camilla is on her way to standing beside Charles when he is crowned king, and William and Kate will just have to wait.

Camilla knows how frustrating this is because she’s had to wait, too. But she’s proved to be inventive about how she waits. It was obvious when Camilla married Charles, and wore not a tiara, but a kind of wheat crown on her head. If anyone took a course in Greek mythology in college, or at least read the book if you didn’t go to class, you would have instantly recognized the halo of the Ceres, goddess of the golden grain.

Charles, in case you missed it, was sending us all a message–We may have like Diana better and wanted her to be queen of our hearts, but Camilla is a goddess in her own right. It was much too soon after Diana’s death to elevate Camilla by having her wear a tiara, though, so she did the next best thing and wore a crown of wheat.

I thought it was totally pagan but inventive and, frankly, she looked very elegant in it.

Now that his eldest son, William, has married and seems poised to take the throne if enough common folk ask him to, Charles is sending us yet another message by gifting his new wife the magnificent Boucheron "honeycomb" tiara–"Here is Camilla, your true next queen." The Queen herself, by lending Camilla her enormous "Delhi Durban" tiara, is sending a similar message: "Camilla will follow in the steps of Queen Mary," for whom that tiara was made.

No matter what The Globe has to say about it.

What’s Waity Katy got in her tiara box? Charles may pay big bucks for a fussy hairdresser to follow Kate around wherever she goes, but the real test is in the tiaras. And here, Camilla wins, hands down.

The Queen usually lends tiaras to her son’s wives, who, being all commoners, didn’t come with tiaras of their own. But she also lends them to her own family members, including occasionally her daughter Anne, the Princess Royal (whenever she can get Anne to agree to put one on). And Anne lent one of hers (the Greek "Meander" tiara) to her daughter, Zara, when she married a really tough and scary-looking rugby player in Scotland earlier this year.

So if Kate Middleton can manage to keep her clothes on, the Queen will likely come up with something special for her. Since Kate is the Duchess of Cambridge, it is likely that, at some point, the Queen will lend Kate the Cambridge tiara. But this is fraught with symbolism as it was the same heavy, huge, honking tiara worn by Princess Diana when she wasn’t wearing her other one, the Spencer tiara. With Diana, the Queen gifted her this incredible tiara at her wedding to Charles (the wedding of the century back in the last century, remember?). After her tragic, fatal accident in Paris, Diana’s family wisely returned the tiara to the Queen, even though technically one might have argued that it was Diana’s.

Now that Waity Katy has waited ten years for her man, she may only have to wait a bit longer for a huge, honking tiara, or two or three. The best way to do it is to keep fluffing up your hair, and hope that when Charles and Camilla take their places in Westminster Abbey for the big coronation day, something special will be handed to Katy, the next queen consort in training.

Meanwhile, she can always borrow Camilla’s creamy crown of wheat.