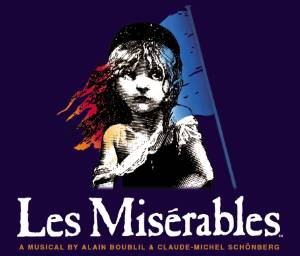 Apparently I wasn’t the only one to notice the similarities between Les Miserables, the Broadway in New Orleans production staged here last week, and the 1960s TV drama series, THE FUGITIVE. Wikipedia noted it too . . . at length . . . in a 250-word paragraph in its entry for the show that ran from 1963 to 1967.

In LES MISERABLES, Police Inspector Javert relentlessly pursues Jean Valjean with the same determination and fervor as Police Lieutenant Philip Gerard (Barry Morse) pursues Dr. Richard Kimble (David Janssen) who was convicted of murdering his wife but escapes and goes on the run for four TV seasons. Even the names “Gerard” and “Javert” were similar - deliberately so, according to the online encyclopedia. The show’s producer, Quinn Martin, admitted as much to Morse and, based on that, Morse read Victor Hugo’s 1862 novel version of LES MISERABLES to get a feel for Javert’s character and bring what he could of it to Lt. Gerard’s character in the show.

Similarities aside, LES MISERABLES is a powerful drama on its own. As a musical production it is nothing short of spectacular. An elaborately staged extravaganza that successfully manages to encapsulate, within the narrow confines of a stage, almost as much as you would see on a movie or TV screen where you have no boundaries.

As the title explicitly states, the story line behind the musical centers around the poor (“miserable”) people of Paris and their struggles to survive in the turbulent early 1830s. The short-lived Bourbon Restoration had recently come to a dramatic end and France was going through yet another of its many 19th century periods of unrest. Few writers captured the milieu of the time better than Victor Hugo.

It’s difficult to say whether or not Jean Valjean qualifies as a “lovable rogue” type of character. Unfairly persecuted would be more correct because there is definitely much more good in him than bad. He did time for a minor offense and led a roughshod life, but his heart and sentiments and sympathies were always with the oppressed and the downtrodden. One cannot help but be touched by his adoption of Cosette, the daughter of Fantine, one of his factory workers who dies early in the production.

It’s equally difficult to say what obsessed Inspector Javert to virtually make a career out of hounding and stalking Valjean, determined to bring him down for whatever reason may have been known only to him. Jealousy, perhaps? We are never told. However, in the end Valjean triumphs but it is a bitter triumph, fraught with tragedy and the harsh realities of life on the lower end of the economic spectrum. The only winners are the young lovers, Cosette and Marius, but their happy ending only came after much suffering by them and those around them. Suffice it to say, this is no Grimm’s Fairy Tale.

No “Mary Poppins” either, which just happens to be the next Broadway production coming here next month.

And now, on to the production itself. The first thing that needs to be stated should be more properly phrased as a question: Why isn’t LES MISERABLES classified as an opera? It appears to fulfill even the most stringent definitions of the art form; in fact, even more so than a good number of other works that ARE in the standard operatic repertoire. For one thing, there is no spoken dialogue whatsoever in the production. NONE! Everything is sung, and beautifully, I might add. There are solo arias, duets, ensemble numbers with a fully period-costumed chorus and all of the other vocal requisite elements of serious opera. There is vivid scenery, imaginatively placed and seamlessly transitioned from one scene to another. There is creative lighting, capturing ideally whatever the occasion in a particular scene calls for. And there is an orchestral accompaniment, albeit not a full-scale philharmonic, but still containing the basic, necessary instrumentation. What more could anyone ask?

The libretto was sung in English, despite being in a French setting. Some of the words were a bit hard to understand at times but the meaning was always clear and effectively conveyed. The most memorable songs were those that ran the full operatic gamut, from the mournful dying song of Fantine (Betsy Morgan), which was hauntingly reminiscent of Mimi’s dying aria in Puccini’s LA BOHEME, to “Master of the House,” led by Thenardier (Timothy Gulan), a typical rousing, raucous drinking song with choral accompaniment. In between the two extremes is the “A Heart Full of Love” duet between Cosette (Lauren Wiley) and Marius (Max Quinlan) with a brokenhearted Eponine (Briana Carson-Goodman) watching them from the sidelines, mourning the loss of her beloved to Fantine’s orphaned daughter.

Especially powerful and effective was the scene at the barricades when the students, led by the charismatic Enjolras (Jason Forbach), revolt against the authorities who are universally portrayed as corrupt and oppressive following the death of the one government official who was on their side. The realistic special effects from shots that were fired from both sides caused some in the audience to cringe in fear.

The consensus star of the production, however, was Valjean, performed and sung very convincingly by Peter Lockyer. He infused breadth and depth into a complex character and the audience was clearly on his side during his run-ins with Javert (Andrew Varela). But, before anyone could fairly classify him as the villain of the piece, Javert came across as more of character deserving of sympathy. He clearly has no friends or a love life to speak of and his purpose in life seems to solely revolve around doing his job, most of which involves getting one-up on Valjean. His early demise, however, robbed the production of a proper operatic confrontational climax, leaving the remaining principals to wrap up the final loose ends without him.

The 14-piece orchestra, conducted by Lawrence Goldberg, fulfilled their component of the production providing the music in appropriately dramatic fashion. At times they drowned out the singers but that is hard to avoid when the score calls for an ff (extra loud), which happens a lot here.

Overall, Les Miserables was a promising start to the third season of Broadway Across America in New Orleans. Maybe, in due time, it will be absorbed into the standard operatic repertoire as it deserves to be.

More in this category: « Sorry Jerry Jones, can’t sign Saints’ Sean Payton yet despite contract void Obama vs. Romney election: US Economy, employment, healthcare on the line »
back to top