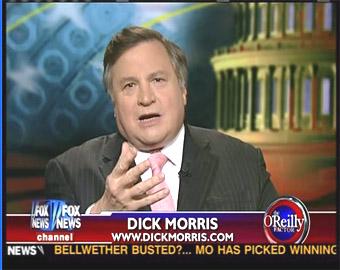 Dick Morris, or otherwise known as the Fox TV analyst that criticizes Barack Obama at virtually every TV opportunity is taking his last shot at the President for election 2012.

This time, it’s a big one.  In an opinion column for The Hill, the analyst has put his reputation on the line in a big way:

Yup. That’s right. A landslide for Romney approaching the magnitude of Obama’s against McCain. That’s my prediction.

On Sunday, we changed our clocks. On Tuesday, we’ll change our president.

In the popular vote, Romney will win by more than 5 points.”

Yup, Morris, who once worked for Democratic President Bill Clinton is now predicting that Romney will take  Virginia, Iowa, New Hampshire Pennsylvania, and Wisconsin—all states that have been in the Obama column for virtually all of this political season.  But, wait, his crystal ball also puts the state of all important states, Ohio, in the “win” line.

Most polls put the popular vote even-Steven.  And most polls claim the battleground states slightly favoring the President.

Among other reasons for this Mitt Romney landslide prediction, Morris cites the recent Obama strategy which is playing defense rather than offense.

“Obama drew his list of swing states too narrowly. He did not contemplate that he would be forced to defend Pennsylvania, Wisconsin, Michigan or Minnesota and squandered his money contesting unwinnable states like North Carolina”, Morris said. “When Romney bypassed Obama’s “firewall” states (like the Germans did the French Maginot Line in World War II), the president had not laid in the necessary prophylactic irradiation of negative ads, and three of the states embraced Romney.”

So, what does Dick Morris know?  Or doesn’t know?

ROMNEY VS. OBAMA, REPUBLICANS VS. DEMOCRATS: DAWNING OF A NEW AMERICA?