Lapdog liberal media no watchdog of Obama or Democrats 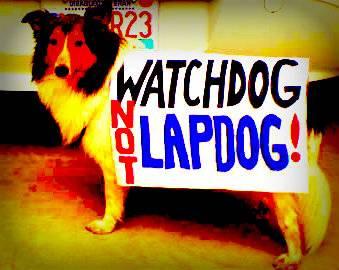 Four years ago, the card carrying members of the liberal news media were overjoyed at the election of Barack Obama as President. In the process, they abandoned any pretext of fair and balanced reporting.

After that initial investment of support, it has been difficult for the media to criticize the President or even make an objective analysis of his record.
By and large, Barack Obama has received extremely favorable media coverage, even though his has not fulfilled many of his campaign promises and his policies have not turned around the weak economy or helped millions of Americans find good paying jobs.
In his re-election campaign, President Obama has largely ignored the media. He has not held a news conference since answering a few questions on August 20. Instead of being criticized for disregarding his responsibility to inform the American people, the President has been given a pass by his friends in the media.
In contrast, a Republican President would have been pulverized by the media for refusing to hold news conferences. Liberal reporters used to eagerly anticipate news conferences as a chance to engage the President in hard hitting questions. During the Reagan presidency, White House reporter Sam Donaldson was known for his aggressive questions and pointed follow-up inquiries.
Sadly, there is no Sam Donaldson in this White House press corps. Most reporters are obviously liberal supporters of the President who are more interested in covering up for Barack Obama than exposing misdeeds in his administration.
The Benghazi scandal is a perfect example. With the exception of Fox News, the media has basically avoided the issue despite a variety of administration lies on who planned the attack and what actually happened inside our consulate in Libya.
Even though our Ambassador and three other Americans were killed, the media followed along while the President’s team invented a ludicrous cover story for the attack, an anti-Muslim video. It was later discovered that the administration was well aware that the consulate was hit by a coordinated terrorist attack. This information was available immediately because the event was captured on real time video.
The day after the attack, September 12, 2012, CBS News interviewed President Obama on 60 Minutes and asked him about what happened. He claimed that it was too early to tell whether it was terrorism, even though it was clearly known from the beginning. The video of this damming exchange was not released by CBS News until Sunday, two days before the election, preventing the scandal from having a real impact on the results.
A fair and balanced news agency would have never withheld from the American people important video of an interview with the President. It can only be assumed that CBS News was working with the Obama campaign and against the standards of journalistic fairness. According to Joel Pollak of Breitbart.com, “Actually, the conclusion to be drawn is quite simple: CBS News, in an effort to assist President Obama's re-election campaign, corruptly concealed information about two critical issues--namely, a terror attack and the president's dishonesty about it. When the players in the Libya scandal face investigation, so, too, should CBS News and those in the mainstream media who have wantonly assisted the administration's shameless lies.”
This analysis is shared by some reporters who have actually covered the White House. Before Brit Hume joined Fox News, he worked for many years at ABC News. He noted the media’s disinterest in the Libyan scandal, but said they would be on the story, “like a pack of hounds if this were a Republican president.” In the view of Brent Bozell of the Media Research Center, the mainstream news media “share in the disgrace that Obama earned” by his dishonesty about what really happened in Benghazi.
This type of posture was not assumed during the Watergate investigation in the early 70’s. In that era, journalists were working non-stop to uncover the truth about the Nixon administration. One newspaper alone, the Washington Post, printed over 200 major stories on the issue.
For Republican Presidents like Richard Nixon or Ronald Reagan, the media assumes their proper role as watchdogs but for Democratic Presidents, the media becomes pathetic lap dog supporters. This was on display during the presidential debates. Liberal moderators interrupted Mitt Romney more often, gave President Obama more air time and in the case of Candy Crowley of CNN actually jumped into the middle of the debate to falsely bolster the President’s Libyan argument.
More Americans are beginning to realize that the media investigates Republican politicians and provides cover for Democrat politicians and they are becoming disgusted with this double standard. It should be no surprise that the ratings for the broadcast news programs are falling and that many liberal newspapers like the Times Picayune of New Orleans, which endorsed President Obama in 2008, and liberal magazines like Newsweek are cutting back or ceasing production.
We can expect this trend to continue and for an increasing number of Americans to seek alternative news sources. The disgraceful bias of the liberal media during the last four years, and especially in this campaign will no longer be tolerated by Americans who cherish fair and balanced news.
It is no surprise that talk radio is not only surviving, but thriving in this new environment.

More in this category: « Despite election fearmongering, the US will withstand Romney or Obama Obama leads Romney, Democrats winning big U.S. Senate seats, Tea Party crashed? »
back to top