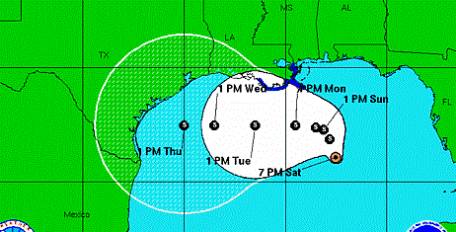 According to the national Hurricane Center, Tropical Storm Debby has been stationary in the Gulf of Mexico with a tropical storm warning is in effect for... the coast of Louisiana from the mouth of the pearl river westward to morgan city...not including the city of New Orleans or Lake Pontchartrain.

The NHC at the 7:00 pm public advisory, in part said: A tropical storm warning means that tropical storm conditions are expected somewhere within the warning area within 36 hours. At 700 pm cdt...0000 utc...the center of tropical storm debby was located near latitude 26.1 north...longitude 87.5 west. debby has been nearly stationary during the past several hours...and little movement is expected tonight. a slow northward motion is forecast to begin by sunday morning...followed by a gradual westward turn by sunday night or monday morning. on the forecast track...

The center of Debby will be moving over the northern gulf of mexico during the next few days. maximum sustained winds are near 50 mph...85 km/h...with higher gusts. these winds are occurring well east of the center of circulation. some strengthening is forecast during the next 48 hours. tropical-storm-force winds extend outward up to 175 miles...280 km.. mainly northeast and east of the center. the minimum central pressure estimated from reconnaissance aircraft data is 1000 mb...29.53 inches.