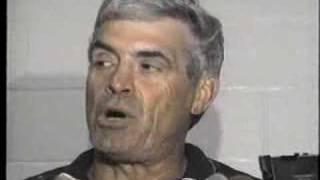 Jim Mora is revered in New Orleans as the head coach who brought the Saints into the realm of respectability, but mentioning his name outside of black-and-gold boundaries elicits a very different response.

The video of Mora, responding to a question on whether his 2001 Colts could make the playoffs has ascended into the lexicon of greatest sports quotes: "Playoffs? Playoffs? Are you kiddin' me? Playoffs? I just hope we can win a game!"

It was November 25, 2001, and Mora's Colts had just committed five turnovers in a dismal loss to San Francisco, dropping them to 4-6. The Saints are in similar position today with a 4-5 record, although the playoffs suddenly have reappeared as a possibility after they won four of their last five. But what does the expert at playoff prognostication say about it? I called him Tuesday morning and got this immediate response: "Playoffs? Are you kiddin' me?” It was followed by the easy chuckle of a man comfortable that he no longer has to worry about such threats to happiness as fumbles, interceptions or a "diddly-poo" performance.

Now a respected commentator on the state of the NFL, Mora sipped his latte as he repeated the same thing he has told his television audience. The Saints dug a deep hole, losing their first four games, and it will be tough to dig out. "Now, understand, when people ask me who my favorite team is, I always say the Saints," Mora said from his home in Palm Desert, California. "But I don't believe they will make the playoffs." Mora cited a difficult schedule ahead, which includes road games against the New York Giants, Dallas and the revenge-bent Atlanta Falcons. In addition, they play the 49ers, now 6-2-1, and the improving 5-4 Bucs at home. With other games at Oakland and home against Carolina, Mora can’t find five wins in those seven games.

"We went 8-8 and made the playoffs in 1990, but it depends on the other teams,"  Mora said. “The Saints won't catch Atlanta and will have to go in as a wild card. It will be difficult enough for them to go 9-7, and that might not be enough to get them in."

Jim Miller's new book, "Where the Water Kept Rising," is now available in local bookstores, at Amazon.com and at his website: www.JWMillerSports.com

More in this category: « Secession from Union Poll: Want your state to secede? Shocked? Election voters blamed George Bush, not Obama for US economy »
back to top