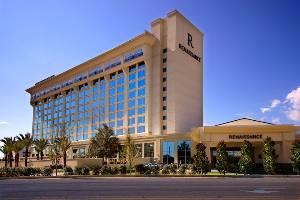 Awards were given to franchisees to recognize and honor their commitment to hospitality excellence.  Representatives from  Renaissance Hotels (including the Renaissance Baton Rouge), JW Marriott Hotels, Autograph Collection, Marriott Hotels & Resorts and Gaylord Hotels were all in attendance.

In its first year, the 256-room Baton Rouge luxury hotel has received numerous awards and recognitions, including the coveted AAA Four-Diamond Award and the recent Trip Advisor® Certificate of Excellence.

The opening of the Renaissance Baton Rouge Hotel, which just celebrated its one year anniversary in October, represented the completion of the first full service hotel in Baton Rouge in more than 40 years. The luxury hotel is also the first Renaissance-branded property to open in the greater Baton Rouge area.

“We are honored to be named ‘Best New Product’ by Marriott International and look forward to sharing our commitment to hospitality excellence with the people of Baton Rouge and visitors near and far,” said Mike Wampold, owner and developer of the Renaissance Baton Rouge Hotel

Indianapolis-based appliance and electronics leader h.h.gregg announced today the grand opening of a Baton Rouge store and further announced it will open  two stores in New Orleans on November 15.

The new Baton Rouge store, located at the Mall of Louisiana, 6401 Bluebonnet Blvd. in Baton Rouge, will be h.h.gregg’s third store in Louisiana.

"We’re very excited to open in Baton Rouge,” said Jeff Pearson, senior vice president of marketing. “We have hired more than 60 area residents to help customers choose the best electronics and appliances for their needs.”

Like all h.h gregg employees, newly hired associates will undergo a comprehensive training program that includes ongoing training. The program is designed to ensure each associate is well prepared to answer all product related questions in order to help customers make the best purchase decisions.

- The Federal Emergency Management Agency and the city of New Orleans recently announced more than $3.5 million in additional recovery aid to restore the city's Municipal Auditorium, which was damaged during Hurricane Katrina.

As a component of the New Orleans Cultural Center, located alongside the Mahalia Jackson Theater for the Performing Arts in Louis Armstrong Park, the Morris F.X. Jeff Sr. Municipal Auditorium, as it's formally called, served pre-Katrina as a public facility with a 6,000-seat capacity to host civic events.

"The Municipal Auditorium has been an important New Orleans landmark with a rich cultural history for decades," New Orleans Mayor Mitch Landrieu said. "These federal recovery dollars are an encouraging step forward and will supplement the money FEMA has already allocated. We are making progress every day and will continue to work with FEMA to identify new eligible funding for this storm-damaged building so that we can one day get it back into commerce. FEMA continues to be an important partner in our recovery from Hurricane Katrina."

In recovery partnership with the city of New Orleans, FEMA Public Assistance staffers recently re-evaluated the eligible damages at the Municipal Auditorium and determined the additional funding was necessary to support disaster-related roof damages not previously taken into account. Likewise, the current funding also covers determined architectural finishes that will require asbestos abatement and remediation of disaster-impacted lead-based paint.