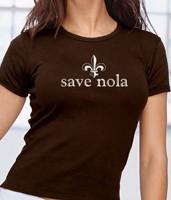 Request: If Louisiana secedes, leave New Orleans out of it

Is the milk of human kindness drying up? When did the bottom line become “all I want is all I can get”? For most my life, I’ve been humming the song, “The times, they are a changin’”… and they always will be. Nothing stays the same, and would we like it if it did?

I suppose what I’m saying is, I’m hearing a lot of “If I don’t look out for myself, who’s going to?” It’s the old “I’m going to pull up my pants and go home” adage. Relax. If you cannot find peace and happiness then make peace and happiness.

This defeatist, negative attitude has overwhelmed far too many. All this talk of seceding is outlandish. You know, if Louisiana gets enough authentic signatures on its petition, all I have to say is, I hope those irresponsible folks agree to annex New Orleans back to the rest of us. I mean, New Orleans is such an exquisite mixture of uniqueness, it would add nothing to the insanity that spurts from the mouths of miscreants. Seceding radicals wouldn’t know what to do with the carefree loving souls that blend and meld New Orleans into the city it is; they’d only bring joy to hearts bound and determined not to be joyful.

First thing we’ll need to do, should these 20 states secede, is set up an immigration policy. Daughter Theresa asked, “Am I going to need a passport to get into the seceding states.”

Another friend said, “I must note that threatening to secede is actually a non-story. It happens regularly. Not at all unlike all the people who threaten to leave the country if/when the other candidate should win the election. Yeah, sure you will. But then... you don't.”

Hmmm. But then… you don’t. Good point.

In my newest humor book about the South in general, and northeast Louisiana in particular, “BooCat Throws a Frisbee,” BooCat considers that maybe northerners are the way they are because it’s much cooler up there. Snow. Ice. Slush. Dark skies. Cold that seeps into the very marrow of the bones.

Bone chilling cold. Not enough sunlight. Depressing not to have enough warmth and light. No wonder there’s such a difference between folks from the South and those northerners, not to mention vocabulary and accent.

Unlike northerners who need a shoulder to cry on, Sisters of the South use them to laugh on. Certain things make the South the South. Biscuits always come with gravy. You don’t ask for iced tea, you ask for Sweet Tea. In the South, front porches are wide and words are long. However, the fact is, we need each other. The South needs the north for stability, while the north needs the South for levity.

My friend Zoomer said, “One good way to honor our veterans is to quit threatening to secede from the nation that they fought to protect.”

Even our Gov. Bobby Jindal said, "It's silly. We are proud to be part of the greatest country in the history of the world. Whatever our political differences, we are American first."

Louisiana’s petition calls for the U.S. to "peacefully grant the State of Louisiana to withdraw from the United States of America and create its own NEW government." It was posted on the White House website on November 7. Nuts!

Bertrand Russell said, “The whole problem with the world is that fools and fanatics are always so certain of themselves, but wiser people are so full of doubts.”

So, hey, I’m going to stop asking how stupid some folks can be… too many of them are taking it as a personal challenge.

Check Barbara Sharik out on Amazon.com

More in this category: « Obama, Congress begins delicate deficit dance on fiscal cliff Ding Dong, Twinkie is dead thanks to Obamas, US economy and unions »
back to top